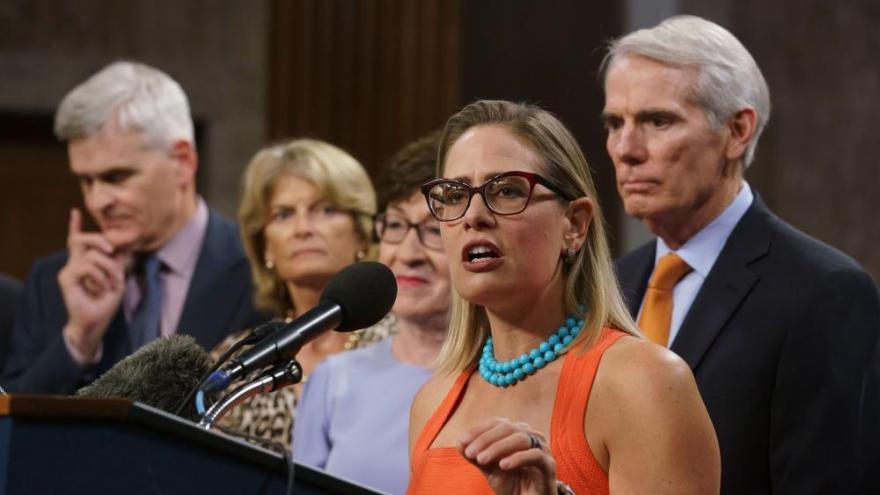 Sen. Kyrsten Sinema, D-Ariz., center, joined from left by, Sen. Bill Cassidy, R-La., Sen. Lisa Murkowski, R-Alaska, Sen. Susan Collins, R-Maine, and Sen. Rob Portman, R-Ohio, speak to reporters just after a vote to start work on a nearly $1 trillion bipartisan infrastructure package, at the Capitol in Washington on July 28. The US Senate will vote Aug. 10 on the package.

(CNN) -- The US Senate passed a historic, sweeping $1.2 trillion bipartisan package on Tuesday to shore up the nation's crumbling infrastructure with funding for priorities like roads, bridges, rail, transit and the electric grid -- a major achievement for both parties and President Joe Biden, fulfilling key agenda items, including his promise to work across the aisle.

The bill passed by a wide bipartisan majority of 69-30, with 19 Republican senators voting for the bill. It now heads to the House of Representatives, where timing on a vote in that chamber remains uncertain, before it can be sent to Biden's desk to be signed into law.

One Republican senator, Mike Rounds of South Dakota, who said he opposed passage of the bill, was not present Tuesday, while he accompanied his wife for cancer treatments, so he did not vote.

The bill -- called the Infrastructure Investment and Jobs Act -- features $550 billion in new federal spending over five years. It invests $110 billion in roads, bridges and major projects, $66 billion in passenger and freight rail, $65 billion to rebuild the electric grid, $65 billion to expand broadband internet access, $39 billion to modernize and expand transit systems and $7.5 billion to build a national network of charging infrastructure for electric vehicles. Among other priorities, the bill also includes $55 billion for water infrastructure, $15 billion of which will be directed toward replacing lead pipes.

The legislation stands to modernize and upgrade the nation's aging and outdated infrastructure, a priority long supported by both parties but that has nevertheless evaded bipartisan compromise for years in a deeply divided political climate. Passage in the Senate will mark the culmination of months of painstaking negotiations between a bipartisan group of senators and the Biden administration, a process that showcased a rare example of successful deal-making between Democrats and Republicans on a major legislative package.

Biden celebrated Senate passage with remarks at the White House on Tuesday and thanked Republicans for their support.

"I know it wasn't easy for the Republicans who supported this bill," Biden said alonside Vice President Kamala Harris. "You showed a lot of courage and I want to personally thank you for that, and I've called most of you on the phone to do just that."

The House of Representatives will likely not take up the bill until the fall. The House is out and Speaker Nancy Pelosi has indicated that the chamber won't take up the bipartisan bill until Senate Democrats pass a separate and more expansive package without GOP votes under the budget reconciliation process, a stand that has been met with criticism from Republicans and pushback from some moderate Democrats.

However, the House is now expected to return for at least the week of August 23, according to Majority Leader Steny Hoyer.

"Assuming that the Senate does, in fact, complete work on a budget resolution, the House will return to session on the evening of August 23 to consider that budget resolution and will remain in session until our business for the week is concluded," Hoyer wrote in a "Dear Colleague" letter on Tuesday.

For months, Schumer has said the chamber would proceed on a dual track strategy for infrastructure, aiming to pass both the $1.2 trillion bipartisan deal and the much larger Democratic-only package with a potential price tag of $3.5 trillion. This two-track strategy was necessary for Schumer to keep both the progressives and moderates in his caucus, like Arizona's Kyrsten Sinema and West Virginia's Joe Manchin, on board. There is zero room for error for the New York Democrat who leads the evenly divided chamber.

Democrats unveiled the budget resolution for their $3.5 trillion package on Monday, and the Senate immediately moved to consideration of the plan Tuesday. A dozen committees are expected to write the exact wording for the reconciliation measure in the coming weeks, with Schumer setting a September 15 deadline for those committees to submit their plans. The Senate is expected to vote as soon as Tuesday evening on a necessary procedural step to start that budget process before leaving for the August recess.

Negotiations were led by Sen. Rob Portman, a Republican from Ohio who is retiring after his current term in office, and Sinema, a moderate Democrat. The bipartisan group of senators took a victory lap on August 1, the night that final legislative text was unveiled, after a weekend of delays as negotiators haggled over remaining sticking points.

"The United States government can work," Sinema said in a speech on the Senate floor that evening. "It is difficult, it is time-consuming, it can be hard, but this very process of finding bipartisan compromise and working together ... is the very heart and the very core of why each of us serve in this government."

The idea of successfully advancing a bill to address the country's infrastructure woes, despite it being an issue that Republicans and Democrats both support, had at one time seemed so far-fetched that the concept of "infrastructure week" became a running joke on Capitol Hill.

A bipartisan group of senators proved Tuesday, however, that a breakthrough was possible.

"People have talked about infrastructure in this city forever," Portman said in floor remarks earlier this month. "This process of starting from the center out has worked."

"We negotiated. It was tough, we had a lot of differences, but we were able to get to this point," he said.

The legislation would make a transformative investment in physical and traditional infrastructure across the country, and backers of the deal say it will spur economic growth and create jobs. According to a White House fact sheet, the legislation would represent "the largest federal investment in public transit ever" and "the largest investment in clean drinking water and waste water infrastructure in American history, delivering clean water to millions of families."

The fact sheet states that the legislation will address the threat posed by the climate crisis "by making the largest investment in clean energy transmission" and electric vehicle infrastructure in history. The bill also aims to increase the resiliency of the country's physical and water infrastructure to natural disasters and climate change and would provide funds to make broadband internet more accessible in rural areas, as well as more affordable for low-income families.

Senators in the bipartisan group have touted that the bill won't raise taxes on Americans, but critics argued that they used tactics that amounted to fuzzy math to cover costs. The Congressional Budget Office released an evaluation of the bill last Thursday estimating that it would "add $256 billion to projected deficits" between 2021 and 2031.

Schumer argued last week that the Democratic-led chamber has taken strides to work across the aisle. "These days it isn't easy to do major bills in the Senate, especially bipartisan ones," he said.

As majority leader, he said, he's prioritized allowing members on both sides of the aisle to get involved in the legislative process -- with amendment votes. "We've had more roll call votes on amendments this year, only halfway through, than during the past two years when Republicans were in charge, combined," he argued in floor remarks last Thursday.

Schumer touted that in addition to the infrastructure investment, this year the Senate advanced a bipartisan bill denouncing discrimination against Asian communities and creating a position at the Justice Department to expedite reviews of potential Covid-19-related hate crimes, and passed bipartisan legislation countering China's growing influence by investing more than $200 billion in American technology, science and research.