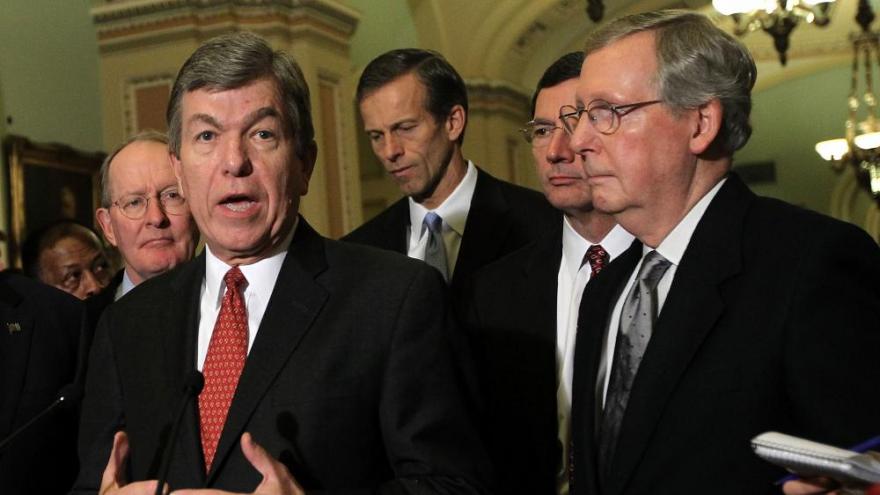 Senate Republicans will decide April 21 on whether to change their conference rules that ban their use of earmarks, an issue that divides the GOP conference and will be a test for how the party will operate over the next several months with Democrats in control of the US Senate.

(CNN) -- Senate Republicans will decide Wednesday on whether to change their conference rules that ban their use of earmarks, an issue that divides the GOP conference and will be a test for how the party will operate over the next several months with Democrats in control of the US Senate.

The discussion to bring earmarks back comes as Democrats have already decided they will engage in the practice. Earmarks were banned in 2010 at the height of the tea party movement when controversies like the famous "bridge to nowhere" in Alaska cast doubt about whether earmarks were ethical or perpetuated wasteful spending.

The decision Wednesday is nonbinding, however, meaning that even if the conference selected not to allow earmarks, members of the GOP may still be able to request them on upcoming appropriations bills.

A handful of Republican senators have said they plan to pursue earmarks regardless of how their conference votes. Both Sens. Dick Shelby, the top Republican on the Appropriations Committee, and Sen. Roy Blunt, a Republican from Missouri, have said it would be a major disadvantage for Republicans to sit out of the earmarks process.

Sen. John Thune, a South Dakota Republican and the minority whip, said that even if the ban stayed in place, many members would still likely request earmarks in the GOP.

"I'm fine with keeping the ban in place but, again, like I mentioned yesterday, you have all these now, the House Republicans have done it, the Democrats doing it," Thune said. "A lot of our members don't want to get boxed out. If the money goes back in the pool, the Democrats get to decided where it goes. There are going to be good arguments on both sides. And as I was saying, we don't have a proposal yet to change it. So if there is not proposal to vote on, it probably stays in place."

Earmarks allow members to specifically target where they want certain funding to go. Without them, those decisions are made by government officials at the agencies. In March, the House Republican conference voted by secret ballot to allow earmarks to be used again within their conference. Democrats have said that in the appropriations process, the amount of money each party would get to be earmarked would be equally divided between both parties. Republicans in favor of earmarks have argued that voting against bringing them back would put their party and their states at a direct disadvantage as all the money would be earmarked for Democratic districts and states.

"If you don't want earmarks, don't ask for them," Shelby said about the need to bring them back despite some GOP opposition.

Still, the vote is expected to be close with more than a dozen Republican senators expected to vote against bringing the practice back. In a letter Monday, 15 senators -- including a member of GOP leadership, Sen. John Cornyn -- wrote a letter opposed to the practice, arguing they would not participate at all even if the conference brought it back.

"Hopefully, some of us will stick with the rule that is in place," Sen. Mike Braun, a Republican opposed to earmarks, told reporters.