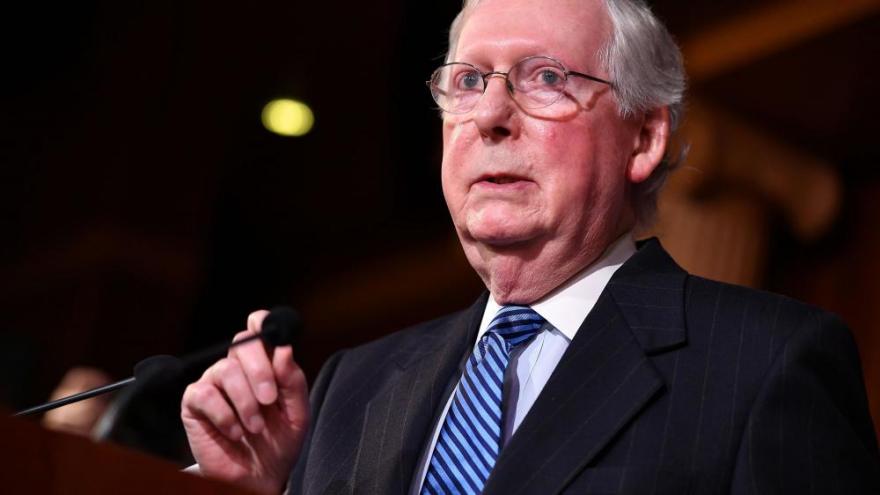 Senate Republicans on Thursday formally rolled out a $1 trillion economic stimulus plan intended to deliver critical aid to US businesses and the American public.

(CNN) -- Senate Republicans on Thursday formally rolled out a $1 trillion economic stimulus plan intended to deliver critical aid to US businesses and the American public.

It's a move that sets the stage for negotiations to begin in earnest between Republicans and Democrats in an effort to reach a bipartisan deal to help an economy hit hard by the rapid spread of the novel coronavirus.

Senate Majority Leader Mitch McConnell called the plan "a bold legislative proposal" in remarks on the Senate floor, saying that he was "officially introducing the Coronavirus Aid, Relief and Economic Security Act."

The Kentucky Republican described the major contours of the proposal by saying that it will deliver "direct financial help for the American people," as well as "rapid relief for small businesses and their employees." He said that the plan includes "significant steps to stabilize our economy and protect jobs" and "more support for the brave health care professionals and their patients who are fighting the coronavirus on the front lines."

But in a sign that hard-fought negotiations are still to come, Senate Minority Leader Chuck Schumer, a New York Democrat expressed some criticism of the proposal after its introduction and the process by which Senate Republicans came up with it, saying that the plan had "virtually no input from Democrats" and warning against corporate industry bailouts.

The $1 trillion emergency economic aid proposal comes in response to the coronavirus pandemic and would include direct payments to Americans under a certain income threshold, $200 billion in loans to airlines and distressed industry sectors and $300 billion in forgivable bridge loans for small businesses.

The proposal, a draft of which was obtained by CNN, underscores the scale of the economic crisis facing individuals and businesses across the country amid the accelerating pandemic and bolsters health care resources, student loans and aid, business tax provisions and temporary authority.

The proposal, however, is just an opening bid as the Senate attempts to address the coronavirus outbreak. It was drafted by Senate Republicans and the Trump administration, with no input from Democrats.

"I believe no one has seen the proposal, or I haven't seen .... the proposal," Schumer said on Thursday. "It had virtually no input from Democrats. But we will look at it and read it tonight."

At the heart of the proposal is hundreds of billions of dollars directed toward "recovery rebates" of up to $1,200 for individuals and $2,400 for couples beneath a certain income threshold.

The proposal also includes $300 billion for loans to small businesses, as well as private organizations. The program would be structured so businesses could take out loans from banks and lenders that would be guaranteed by the Small Business Administration. Those loans must be used, according to the proposal, to pay for salaries, mortgage payments, other debt obligations and payroll support including paid sick, medical and family leave, as well as health care benefits.

Now Republicans and Democrats will need to try to reach a bipartisan agreement to move a stimulus package forward as the virus continues to spread and take a major toll on public health and the economy.

Schumer said on Thursday that because Republicans did not involve Democrats from the start the way they had called for he was concerned that would "prolong the length of time before we act."

He said, however, that Senate Democrats "look forward to working with them (Republicans) to come up with a bipartisan product as soon as we can as this crisis grows worse every day."

Underscoring the challenge that lies ahead, Senate Republicans are not completely unified over what to include in the economic stimulus.

There was significant debate and disagreement in the Senate Republican Conference lunch Thursday over President Donald Trump's proposal to provide most Americans with $1,000-plus checks to boost spending and stimulate the economy, stalled because of the coronavirus outbreak.

Senior Republicans pushed back on the idea, arguing it would be more effective to use that money to support loans and grants to small businesses that keep their employees on the payroll and to boost funding for state unemployment systems.

Sen. Richard Shelby, the Alabama Republican who chairs the Appropriations Committee, said he didn't understand the logic of sending cash to people who have not lost their jobs.

"I personally think that if we're going to help people we should direct the cash payments maybe as a supplemental to unemployment, not to the people who are working every day, just a blank check to everybody in America making up to $75,000," Shelby said. "I don't see the logic of that."

Sen. Lindsey Graham, a Republican of South Carolina and ally of Trump, argued the direct payments might be better used later, once the virus is defeated and a stimulus might jump-start the economy.

"You can't stimulate something that's padlocked. Once the padlock is off, which is the virus, then we'll talk about stimulating the economy," he said. "People need income stability."

Graham explained why the loan program would be more effective.

"If you got a bar that's closed, bar owner goes in and applies for a loan, which will become a grant most likely. And you have to use the money to pay payroll. The people never go into the unemployment insurance system. They get a check from their employer and when this is over they go right back to work. That is a good idea for some. And those that won't work for go to unemployment insurance," Graham said.

Sen. James Lankford, a Republican from Oklahoma, said the loan program would have a "much bigger impact" than direct payments.

"I think that has the greatest bang for the buck to be able to keep people employed. A one-time check that comes to someone is not as significant as knowing my job is going to be there," Lankford said.

Despite the disagreement over one of the pillars of Trump's $1 trillion economic stimulus program, the cash payments were part of a Senate Republican proposal released Thursday.

Sen. Kevin Cramer, a Republican of North Dakota, said even though there is disagreement over direct payments, he thinks the idea has too much momentum to be stopped now.

"There's some disagreement on direct payment checks versus unemployment insurance, versus what a good lending program would look like," he said. "But I would say the momentum is with some form of direct payments, whether it's in the form of checks, direct deposit more likely."