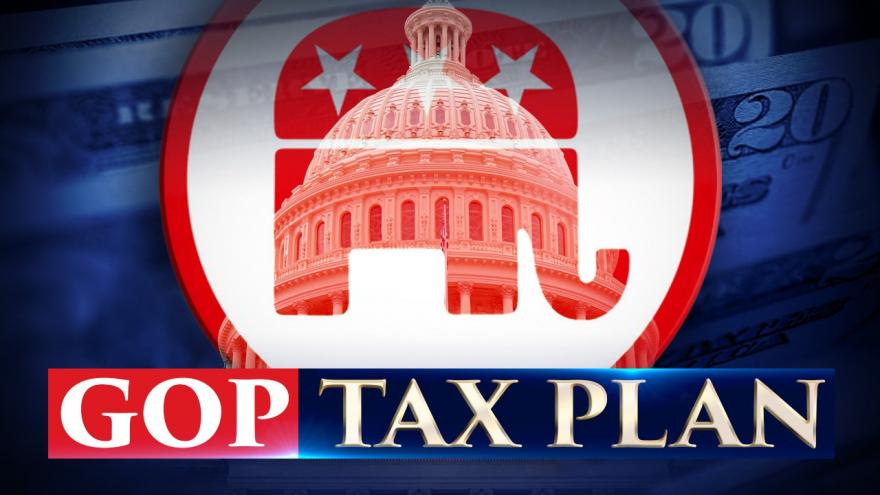 (CNN) -- Senate Republicans released their own version of a tax plan Thursday, and it varies just enough from the House's bill to set the two chambers up for a dramatic showdown over tax policy in upcoming weeks.

House Republicans on the ways and means committee passed their version of a tax overhaul along a party line vote Thursday, sending the bill to the House floor.

As Senators emerged from a closed-door briefing, they laid out some of the details of their version Thursday.

According to Sen. John Hoeven, a Republican from North Dakota, the Senate tax bill includes more individual tax brackets than the House bill (seven instead of four). Hoeven also said that the Senate bill fully repeals the state and local tax deduction, which has become a must-save item for moderate Republicans in the House. The House bill repealed the deduction for state and local income and sales taxes, but preserved the property tax deduction up to $10,000 to assuage concerns from New York and New Jersey Republicans.

But the differences don't end there. While the House bill eventually repealed the estate tax in its entirety, the Senate bill won't repeal the tax, members said, but instead will limit the number of families affected by it.

The Senate bill also maintains a provision to allow individuals to write off medical expenses that exceed a certain amount of their income, something the House bill scrapped entirely. The issue has become a major flashpoint in the debate in the House, and Hoeven acknowledged that watching the fights play out in the House helped inform the Senate bill.

"Look, as we hear things from our constituents and analyze them, it's helped us," Hoeven said.

Republican senators were briefed on their legislation Thursday morning just as House Republicans were preparing to vote their own bill out of committee Thursday afternoon.

Most members emerging from the meeting said that the Senate bill was at the very least a step in the right direction.

"The conversation, the negotiation will continue until we arrive on consensus," Sen. Ted Cruz, a Republican from Texas, said of the initial plan he saw in the conference. "This is an ongoing discussion."

Republicans on both sides of the Capitol have laid out an aggressive timeline to pass their tax bills out of both chambers. The ultimate goal is to have a tax cut bill on the President desk before the end of the year.

Senate Republicans unveiled their plan just days after Democrats swept state races in New Jersey and Virginia -- an election GOP members said was a wake-up call that their party needs to pass at least one major legislative accomplishment or else face electoral backlash in the midterms.

"If we don't produce, it'll get worse," Sen. Lindsey Graham, a Republican from South Carolina told CNN. "The antidote to this problem is to pass a tax cut that Americans believe helps them and their families, to replace a broken health care system with something better. And if we do those things, I think we'll do fine in the fall."

Senators are especially feeling the weight of the task ahead. Unlike the House where after fits and starts the party eventually came together to overhaul Obamacare, the Senate failed to pass a repeal of the Affordable Care Act this summer and members are emphatic that they cannot afford to be 0-2 heading into the 2018 midterms, no matter how good the map looks for them.

Senators are constrained in a way that House tax writers technically aren't. Under Senate rules, the Senate finance committee must produce a tax plan that doesn't increase the deficit by any more than $1.5 trillion over the next decade.

That is part of the reason that Senate Republicans are considering phasing in a new corporate rate of 20% rather than starting it right off the bat, which is expensive. While President Donald Trump has been clear he wants to see a corporate tax rate reduction from 35% to 20% immediately, the cost may be too great.

"We haven't made that decision ultimately on that delay," said South Carolina Sen. Tim Scott. "There's a lot of pressure to do it now."

Some Senate Republicans Including Florida's Marco Rubio have also lobbied to increase the child tax credit to $2,000 up from the increase to $1,600 in the House bill. And Sen. Susan Collins of Maine has lobbied the committee not to fully repeal the estate tax, which the House bill repeals after 2023.

"The bill is going to be released either tomorrow or Friday. Until it is, I've been asked not to comment on the specifics," Collins said. "But it certainly is true I've expressed reservations about having complete repeal of the estate tax."

Another major change in the Senate bill could be a full repeal of the state and local tax -- also known as SALT -- deduction.

SALT, as it's known on Capitol Hill, became a major touchstone in the US House where more than a dozen Republicans from high tax states like New Jersey and New York fought to preserve at least a core part of the tax write off. After a handful of closed-door meetings in the House, Ways and Means Chairman Kevin Brady announced he'd preserve the tax deduction for property taxes up to $10,000, but that deductions on income or sales taxes would be repealed.

However, unlike the House where the GOP's majority is dependent on a handful of members from swing districts in blue states where property taxes are high, most of the Republican senators hail from lower-tax states that are more solidly Republican and less dependent on the SALT deduction.

Still, House Republicans are warning that a full repeal of SALT could be trouble for passing the tax bill through the full Congress.

"I will be very clear. Repealing the state and local tax deduction is just not a policy that will make its way through the House side. The Senate indications that they may potentially do that, I just don't see how that math works to get to tax reform," said Rep. Tom Reed, a Republican from New York.

Reed said he'd been talking to senators about the issue.

"I think it's very clear. You have 73 Republicans from the House that come from high-tax states. If you go down the path of trying to repeal the entire state and local tax in the Senate, than that is just not going to work," he said.

Adding to the complications for the Senate is the margins by which Senate Republicans have to pass a tax bill. Majority Leader Mitch McConnell can only afford to lose two of his own senators if he is going to pass the bill along party lines.

There is some effort to bring Democrats on board, but after a closed-door meeting in the Library of Congress Tuesday afternoon between a handful of Democrats, White House legislative director Marc Short and White House economic adviser Gary Cohn, Democrats were still waiting to see how the process would move forward before committing to sign on. During the meeting, Trump called in from Asia to try and sell Democrats on the plan, telling them he'd be a "big loser" if the GOP plan is signed into law.

"If they put this bill out Friday and then try to jam it on Monday, move it through ... it's not real bipartisanship," warned Ohio Democratic Sen. Sherrod Brown.

Overall, Republicans are still optimistic that they can shepherd their bill through committee and pass it on the floor.

"I feel different than with healthcare," said Kansas Sen. Jerry Moran. "That there's a greater likelihood that involves passage of tax reform."

As to how they will settle what could be grave differences between the House and the Senate bill?

"I think this process is a healthy one. We're going to look to improve out bill at every step in the way. We hope the Senate passes their very best version of tax reform, as well," Brady told CNN's Phil Mattingly in an exclusive interview Wednesday. "What I'm confident of (is) we will reconcile and find common ground in the end."