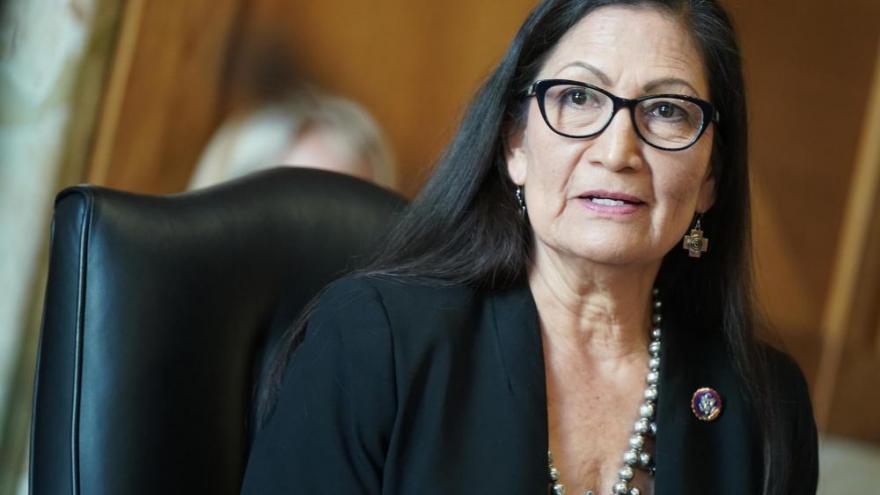 Rep. Debra Haaland, President Joe Biden's nominee for Secretary of the Interior, testifies during her confirmation hearing before the Senate Committee on Energy and Natural Resource, at the U.S. Capitol on February 24, in Washington, DC.

(CNN) -- The Senate is slated to vote on Monday to confirm Deb Haaland as President Joe Biden's Interior secretary, a historic move that will make her the first Native American Cabinet secretary.

She is expected to be confirmed despite the fact that some Republicans have expressed concern over her nomination and described her views on public land use and fossil fuels as extreme.

It won't be the first time Haaland has made history. In 2018, she was elected as one of the two first female Native Americans in Congress. Her nomination to lead the Interior Department was a victory for an alliance of progressives and Indigenous leaders who campaigned to elevate one of their own to a powerful federal seat that oversees natural resources, public lands and Indian affairs. Once confirmed, Haaland will be part of Biden's plan to tackle the climate crisis and reduce carbon emissions.

During her confirmation hearings, Haaland highlighted her history-making nomination, saying, "The historic nature of my confirmation is not lost on me, but I will say, it is not about me. Rather, I hope this nomination would be an inspiration for Americans -- moving forward together as one nation and creating opportunities for all of us."

Discussing her motivation to take on the job, she said, "It's difficult to not feel obligated to protect this land, and I feel that every Indigenous person in this country understands that," adding, "We want to protect this country, and that means protecting it in every single way."

During a procedural vote Thursday, four Republicans, Sens. Lindsey Graham of South Carolina, Susan Collins of Maine, and Dan Sullivan and Lisa Murkowski of Alaska, joined all Democrats voting in favor of advancing her nomination.

Republicans who oppose Haaland's nomination highlighted previous comments she's made related to fossil fuels and answers they felt were insufficient at her confirmation hearing. Sen. John Barrasso, a Republican from Wyoming and the ranking GOP member on the Senate Energy and Natural Resources Committee, spoke in opposition to the nomination in a floor speech Thursday.

"Representative Haaland's policy views and lack of substantive answers during her confirmation hearing, in my opinion, disqualify her for this job," Barrasso said, referencing past comments she has made, including during a 2019 interview with The Guardian where she stated that she "wholeheartedly" opposes fracking and drilling on public lands.

During her confirmation hearings, Haaland attempted to strike a delicate balance on energy and environmental policy, saying, "There's no question that fossil energy does and will continue to play a major role in America for years to come." But, she added, "Our climate challenge must be addressed," and she contended that "the Department has a role in harnessing the clean energy potential of our public lands to create jobs and new economic opportunities."

On several occasions, Haaland declined to give her personal opinions in the face of questions from Republican senators, indicating instead that she would work in service of Biden to carry out his administration's agenda.

GOP Sen. Steve Daines of Montana asked Haaland at one point, "Do you support a ban on fracking and no new pipelines?" She replied, "President Biden does not support a ban on fracking is my understanding." Daines pressed again on the question, and Haaland said, "If I am confirmed as secretary, I would be serving at the pleasure of the President and it would be his agenda that I would move forward."

Despite Republican opposition, Democrats have lauded and praised Haaland as qualified for the job.

Sen. Martin Heinrich, a New Mexico Democrat, spoke in support of her nomination in a Senate floor speech, saying, "I'm confident that she is the leader that we need at Interior to take on the important work of restoring our landscapes, opening up new outdoor recreation opportunities for all Americans and putting our public lands to work in confronting the climate crisis."

"I am eager for the Senate to finally take up Congresswoman Haaland's confirmation so that she can get to work protecting our natural heritage for future generations," he said.