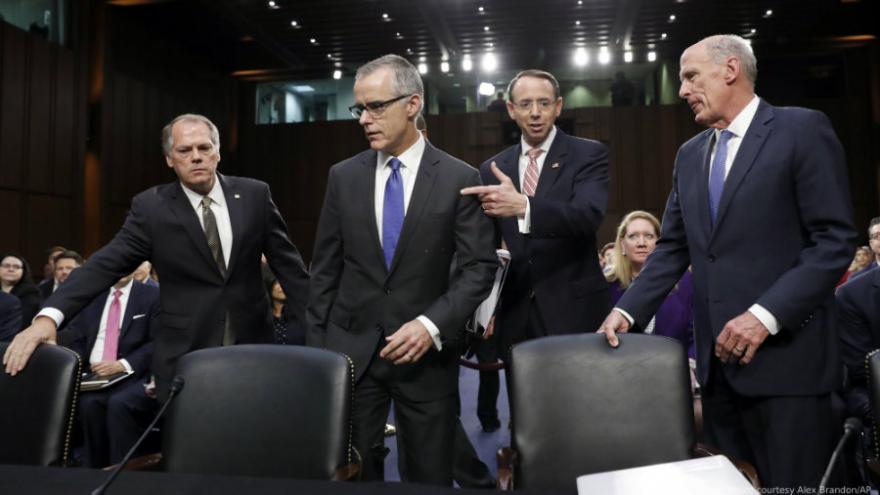 (CNN) -- James Wolfe, former security director for the Senate Intelligence Committee charged with lying to FBI agents, filed a motion on Tuesday to prevent anyone involved with his case -- up to and including President Donald Trump -- from speaking publicly about the case.

In the filing, Wolfe's attorneys say comments made by Trump and senior Justice Department officials "have threatened Mr. Wolfe's right to a fair trial under the Sixth Amendment" with an impartial jury and the presumption of innocence.

Last week Trump told reporters that "It's very interesting that they caught a leaker ... it's a very important leaker."

Assistant Attorney General John Demers said in a statement last week that the allegations were "doubly troubling as the false statements concern the unauthorized disclosure of sensitive and confidential information."

Wolfe's attorneys pointed to those two statements in their motion, noting that Wolfe has not been charged with leaking classified information. Wolfe has been charged on three counts of giving false statements to the FBI about providing two reporters with non-public information related to the matters occurring before the committee.

"It does not matter that the President is not himself a lawyer, or that he and other senior officials and supervisors are not physical or formally appearing in court on behalf of the government," the attorneys wrote in the motion. "They have inserted themselves into this case either as part of the government 'party' or as counsel to the government, and they present a significant, proven threat to Mr. Wolfe's right to a fair trial. As the head of the Executive Branch, the President is ultimately responsible for all powers wielded by that Branch, including prosecutorial powers."

Wolfe seeks "to prevent the most visible and powerful representatives of the party seeking to convict him of serious crimes from making public statements that jeopardize his right to an impartial jury," his attorneys wrote.

Wolfe appeared in court on Tuesday for a brief status conference hearing in front of Judge Ketanji Brown Jackson. Wolfe, appearing stoic, said nothing except to tell Jackson he understood the conditions of his release ahead of the trial.

Wolfe later appeared with his attorneys outside the court in front of reporters, though he made no public comments. One of his attorneys, Benjamin Klubes, said Wolfe has been a "dedicated public servant and a decorated army veteran" and that they will "vigorously defend his case."

Wolfe's right "to an impartial jury and the presumption of innocence have been jeopardized by President Trump's comments about the merits of this case," Klubes said.