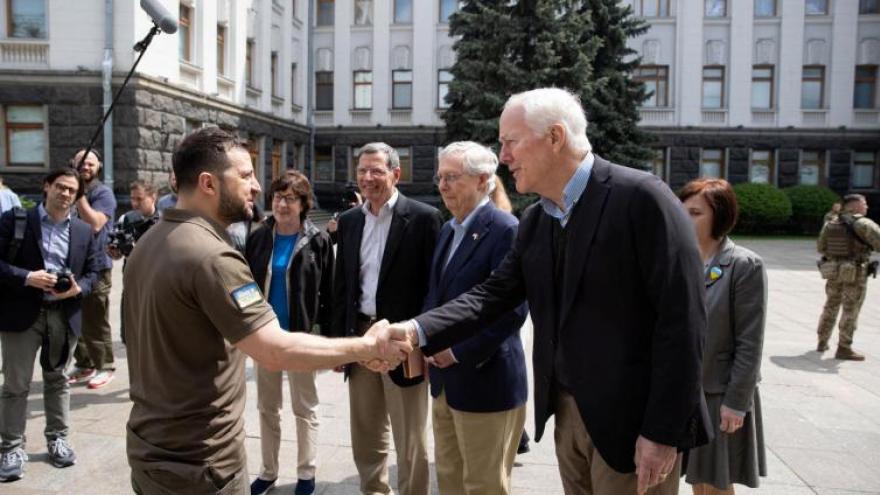 The Senate is expected to vote on May 19 to pass a roughly $40 billion bill to send aid to Ukraine. Ukraine's President Volodymyr Zelenskiy (left) welcomes Senator John Cornyn (R-TX), in Kyiv, Ukraine May 14.

(CNN) -- The Senate is expected to vote on Thursday to pass a roughly $40 billion bill to send aid to Ukraine as the country fights back against Russia's brutal and unprovoked attacks.

The measure passed the House earlier this month and once passed by the Senate will go to President Joe Biden to be signed into law.

The legislation provides money for military and humanitarian aid, including funding to assist Ukrainian military and national security forces, help replenish stores of US equipment sent to Ukraine, and provide public health and medical support for Ukrainian refugees.

Aid to Ukraine has been a rare area of bipartisan consensus on Capitol Hill with many Democrats and Republicans rallying around calls to help the embattled nation.

Not all lawmakers are on board with the push to send an additional $40 billion in aid to Ukraine, however. Some Republican senators have taken issue with the high price tag of the legislation and the fact that the cost is not offset, and have expressed concerns that European countries are not contributing enough funds. Earlier this week, 11 Republican senators voted to oppose advancing the aid package.

Sen. Mike Crapo, the top Republican on the Senate Finance Committee and who is up for reelection in Idaho, said he voted no on a procedural motion to advance the bill because he wanted cost offsets for the expensive bill. He said he is not concerned the vote will send the wrong message to Ukraine, which is battling for its survival against Russia.

The bill also provides $6 billion in Ukraine Security Assistance Initiative funding, another way the Biden administration has been providing Ukraine with military assistance. The funding allows the administration to buy weapons from contractors and then provide those weapons to Ukraine, and as a result does not draw directly from US stocks.

According to a fact sheet from House Democrats, the funding will be used to assist Ukrainian military and national security forces and will go toward weapons, equipment, training, logistics and intelligence support as well as other needs.

There will also be roughly $9 billion to help restock US equipment that has been sent to Ukraine, which comes as many lawmakers have raised concerns about replacing US stocks of weapons the US is giving to Ukraine, especially stingers and javelin missiles.

The bill provides $3.9 billion for European Command operations, which includes "mission support, intelligence support, hardship pay for troops deployed to the region and equipment, including a Patriot battery," according to a House Democrat fact sheet. The Department of Defense has added additional US troops in Eastern European countries to bolster support for NATO allies near Ukraine since the Russian invasion of Ukraine began.

To address humanitarian needs, the bill will include $900 million to bolster refugee assistance, including housing, trauma support and English language instruction for Ukrainians fleeing the country.

The measure provides an additional $54 million that will be used for public health and medical support for Ukrainian refugees.

Bipartisan Senate leaders had hoped to approve the emergency funding bill last week to swiftly send billions in military aid to Ukraine as the war enters almost its third month.

But Sen. Rand Paul, a Republican from Kentucky, blocked passage of the aid package until Thursday of this week, which is the day the Biden administration said additional funds must be approved to avoid a lapse in support for Ukraine.

Paul has demanded that language be added to the bill that provides a special inspector general new authority to oversee how the Ukraine aid is being spent. And while members from both parties broadly agree with that notion, forcing a change to the bill at such a late stage is time consuming and would slow getting the needed emergency aid to country.

Under Senate rules, any one senator can slow down the process. It took about a week to overcome Paul's objection through timely procedural steps that the majority leader had to take on the Senate floor.

"I think we should have an inspector general," Paul told CNN earlier this week. "We have one out there and overseeing Afghan waste. He's been very good at it. You don't have to wait for an appointment. He's got a team up and running. And I think that's what we should do."

Schumer slammed Paul for delaying the emergency funding aid, arguing it was for "purely political motives" and only "strengthens Putin's hand."

Paul said in a floor speech before objecting to the legislation's passage last week that his "oath of office is the US constitution not to any foreign nation" and, "we cannot save Ukraine by dooming the US economy."

Senate Majority Leader Chuck Schumer said he expects that on Thursday the Senate will "finish the critical task of approving another round of military, humanitarian and economic aid for the people of Ukraine."

He continued to say, "This should already have been done and over with, but it is repugnant that one member from the other side, the junior senator from Kentucky, chose to make a show and obstruct Ukraine funding knowing full well he couldn't actually stop its passage."