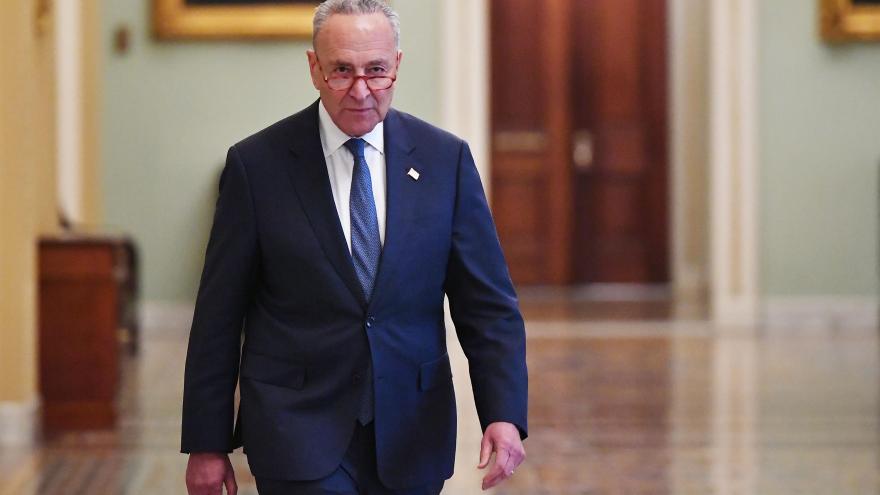 (CNN) -- Senate leaders are preparing for a contentious session Tuesday that could stretch several hours as well as send the chamber into a closed session as Democrats try to force the GOP into accepting witness testimony and documents to be produced during the impeachment trial, according to multiple senators and other sources familiar with the planning.

Democrats will try to amend the organizing resolution that will be offered by Senate Majority Leader Mitch McConnell. Under McConnell's plan, there is expected to be no guarantee that there will be witness testimony or documents produced, decisions Republicans want to punt until after opening arguments are completed on both sides and senators have a chance to ask questions.

But Democrats will attempt to change that. Senate Minority Leader Chuck Schumer is expected to offer at least one amendment to stipulate that witnesses must testify and that documents blocked so far by the White House be turned over to senators. But Democratic senators told CNN that it's possible Schumer could try to offer multiple amendments, and that could stretch debate on for several more hours.

That's because, at the moment, it's expected that there will be two hours of debate -- equally divided between the two parties -- for each amendment.

It's still uncertain how many amendments there would be, or precisely how Tuesday's debate would shake out because McConnell has yet to unveil his resolution publicly that will detail the procedures of the trial.

Opening arguments from the House Democratic managers would not occur until after debate over the amendments concludes and the Senate resolution is adopted. GOP senators are expected to unify and reject the Democratic amendments.

Here's where things could also get interesting. Senators are not allowed to debate in open session while the trial is ongoing. If they want to debate, they would have to go into closed session, and a vote of at least 51 senators is required to make the proceedings private.

Otherwise, the amendments would be debated in public between the House impeachment managers and President Donald Trump's defense team.

Schumer on Thursday suggested he would seek to limit the number of closed sessions that would occur.

"I would like it to be as open -- I mean, might there be an occasional moment where we think we might come together in a closed session? Yes, but the strong presumption is to be open, and I want to see as much of it open as possible," Schumer told reporters.

A Senate leadership aide said that closed sessions might be needed since senators are required to keep quiet during an impeachment trial.

"Closed-session deliberations are a common feature because it's the only time when the Senate's impeachment rules permit senators to talk," the aide said. "Outside of closed session, senators have to be silent. So any time the members want to deliberate and discuss a resolution or a motion in the chamber, closed session is their only option."

A source involved in discussions says that the Senate will have at least one closed session Tuesday. When that happens, everyone has to leave the chamber, including the House managers and the President's defense team, the source says.

Senate Republican leaders are also mulling limiting the number of days given to both the House managers and White House defense team to present their opening arguments, according to four sources familiar with the matter.

The topline number of hours provided to both sides will remain at 24 hours, but the number of days the sides would be provided to make the presentations would be limited to as few as two -- an effort to speed up the trial will also sticking to the 1999 Senate trial of President Bill Clinton. Under that plan, the House managers and White House defense team would be provided two 12-hour periods to present their arguments.

One source familiar told CNN that McConnell brought up the potential for condensed timeline during a closed-door lunch.

The sources cautioned that things remain fluid and it's possible the idea will end up on the cutting room floor as McConnell attempts to balance the desire by some in his conference to undertake a fulsome trial and others who want a speedy process toward acquittal for Trump. They also noted that it's entirely possible one or both sides would choose to yield back some of their time during the presentations.

McConnell and Republicans are drafting a resolution that is expected to move on purely partisan lines, with Democrats opposed to the trial structure on account of the fact they want provisions to guarantee subpoenas for witnesses and documents at the front end of the process. McConnell, citing the Clinton trial, has unified his conference behind not considering witnesses until after two initial stages: the presentations from both sides and a period of 16 hours when senators are allowed to ask questions.

Sen. Thom Tillis, a North Carolina Republican, appeared to allude to the idea when talking to reporters on Friday.

"I'll be interested to see whether or not that gets elongated over a few days, but I think the going in posture is two, 12-hour periods," Tillis said.