Senators explain their votes on impeachment trial after closing arguments 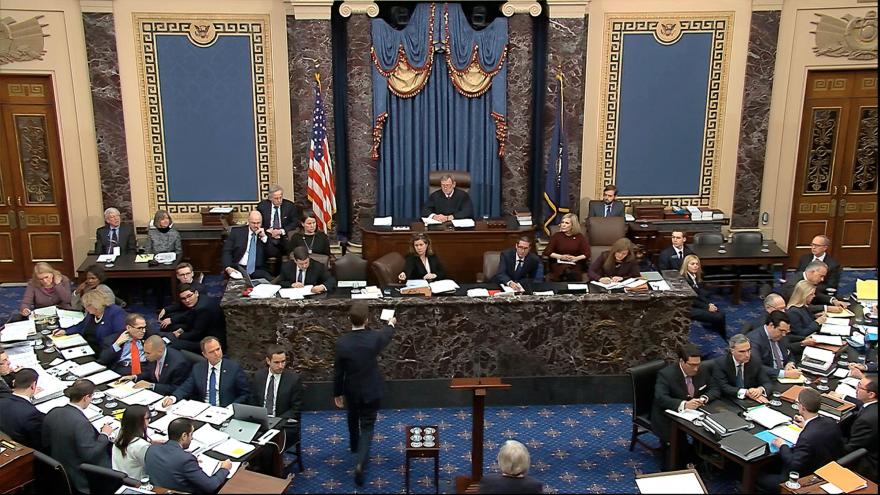 (CNN) -- The House impeachment managers and President Donald Trump's legal team took their final shots Monday to pitch to any senators still on the fence in the President's impeachment trial, even if the outcome is a foregone conclusion.

The impeachment managers and defense counsel made their closing arguments, ahead of the final vote on Wednesday at 4 p.m. ET. The Senate is poised to acquit Trump, as a conviction would require a two-thirds majority, but there still is some uncertainty over the margin of the vote — and whether any senators cross party lines.

One of the possible fence-crossers, Republican Sen. Lisa Murkowski of Alaska, said on the Senate floor Monday evening that she would vote to acquit the President.

The endgame of the trial is set this week after the Senate voted last week to defeat a motion for subpoenaing witnesses and documents, which would have extended the proceedings. In that vote, which failed 49-51, two Republicans, Sens. Mitt Romney of Utah and Susan Collins of Maine, joined with Democrats.

In his closing arguments, House Intelligence Chairman Adam Schiff acknowledged that the votes wouldn't be there to remove the President from office. But the California Democrat focused on the Senate Republicans who believe the core of the House's case — that the President withheld a White House meeting and $400 million in security aid to pressure Ukraine to investigate former Vice President Joe Biden — charging they must vote to remove the President.

"If you find that the House has proved (its) case and still vote to acquit, you'll name will be tied to his with a cord of steel and through all of history," Schiff said, warning "history will not be kind to Donald Trump."

"But if you find the courage to stand up to him, to speak the awful truth to his rank falsehood, your place will be among the Davids who took on Goliath, if only you will say enough," he added. "Is there one among you who will say enough?'"

The House impeachment managers detailed their case but also harkened back to history, citing Founding Father Alexander Hamilton, President Abraham Lincoln and poet and novelist Maya Angelou. Rep. Jason Crow, a freshman Colorado Democrat, pointed to a quote from the "Harry Potter" character Albus Dumbledore that he said hung in his son's bedroom: "It is our choices that show who we truly are, far more than our abilities."

The President's team argued that House Democrats have been insistent on impeaching Trump since the President was inaugurated in January 2017. The President's personal attorney Jay Sekulow played a video montage — backed by a soundtrack out of a campaign ad — of House lawmakers saying they supported impeachment over the past three years.

After the arguments wrapped up, senators had two days to go to the floor and explain their votes.

A handful of senators in both parties have still not said whether they will vote to convict or acquit the President on the two articles of impeachment — abuse of power and obstruct of Congress — that the House passed in December.

On the Republican side, Collins, Romney and Murkowski are being eyed by Democrats as possible crossovers.

Murkowski announced Monday that she would not vote to acquit the President, however, which was not a big surprise given she also voted against calling witnesses.

In the final floor speech of the day, Murkowski criticized all sides -- the House, the Senate and the President -- for the process that's culminated in the Senate's impeachment vote this week. But she concluded she could not vote to remove the President from office.

"I cannot vote to convict. The Constitution provides for impeachment but does not demand it in all instances," Murkowski said. "The President's name is on ballots that have already been cast. The voters will pronounce a verdict in nine months. And we must trust their judgment."

Murkowski's argument was similar to that of Republican Sen. Lamar Alexander of Tennessee, who was a pivotal vote last week on whether to call witnesses. Alexander said the House had proved its case -- but that the conduct was not impeachable.

"The President's behavior was shameful and wrong," Murkowski said Monday. "The House failed in its responsibilities, and the Senate, the Senate, should be ashamed by the rank partisanship that has been on display here ... It is clear to me that few in this chamber approached this with a genuinely open mind."

Among Democrats, Sens. Joe Manchin of West Virginia, Doug Jones of Alabama and Kyrsten Sinema of Arizona are seen as possible crossovers.

Manchin took to the floor Monday afternoon to explain his thinking, but not his vote.

"I remain undecided on how I will vote," Manchin said, explaining that the vote has "weighed heavily on me."

Manchin praised the case that the House had made against the President, but also bemoaned the partisan nature of the impeachment that failed to get any Republican support in the House. He proposed a censure of the President would be a more effective option — and one that could garner a bipartisan majority. Senators in both parties on Monday dismissed censure as an alternative, and Manchin acknowledged he would ultimately have to decide how he will vote to remove Trump from office.

"I am truly struggling with this decision and will come to a conclusion reluctantly," he said.

Jones said he was going to be listening to the closing arguments as he decided what to do.

"I'm getting there," he told reporters Monday when asked if he knew how he would vote. "I'm going through all my notes. I'm going through everything, and I really do want to hear the arguments and some conversations from colleagues."

Inside the Senate chamber on Monday, things were more subdued than the previous week, with fewer senators taking notes and more eyes wandering around the room.

During Monday's lunch break in between presentations, the undeclared senators came together on the Senate floor.

Sinema chatted with Sen. John Thune, a South Dakota Republican and the Senate majority whip. The two eventually joined in a conversation with Collins and Murkowski. It's unknown if they were just making small talk or talking about the final vote — at one point, Murkowski could be heard from the press gallery above the chamber making a comment about the Super Bowl.

At the tail end of the lunch break, Manchin and Murkowski whispered back and forth at Manchin's desk.

When the Senate trial ended for the day, Manchin spoke to Schiff for several minutes.

After Monday's closing arguments, senators began making speeches to explain their votes publicly on the Senate floor, a welcome chance for many senators who have been barred from speaking in the Senate for the duration of the trial. Senators will be able to speak between now and Wednesday's final vote.

The setup was the result of frantic negotiations on Friday for mapping out the final stages of the impeachment trial. Many Republicans, particularly those allied with Trump, wanted to push to end the trial after Friday's witness vote, even if it pushed the final verdict into the middle of the night Saturday.

But several Republicans, including Collins and Murkowski, wanted the chance to speak to explain their votes. During the 1999 Bill Clinton impeachment trial, the Senate spent three days in closed session to deliberate.

Democrats, meanwhile, had 2020 considerations — with Sens. Elizabeth Warren of Massachusetts, Bernie Sanders of Vermont and Amy Klobuchar of Minnesota eager to spend the weekend in Iowa. Plus, they weren't interested in allowing the President to be acquitted ahead of Tuesday's State of the Union address.

So the two sides agreed to hold closing arguments on Monday, which the 2020 candidates returned to Washington for before darting back to Iowa for the caucuses Wednesday evening.

The trial is wrapping up without hearing from former national security adviser John Bolton, who became a key focal point of the witnesses debate after allegations emerged in his draft book manuscript that Trump told him the aid to Ukraine was conditioned on the investigations.

But the House could still pursue Bolton afterward. Schiff sought Bolton's testimony in the House impeachment inquiry last year, though he did not pursue a subpoena after Bolton's lawyer threatened to take it to court. Schiff was coy on Sunday about whether he will pursue Bolton again.

"I don't want to comment to this point on what our plans may or may not be with respect to John Bolton, but I will say this: whether it's before -- in testimony before the House -- or it's in his book or it's in one form or another, the truth will come out, will continue to come out," Schiff said on CBS' "Face the Nation."