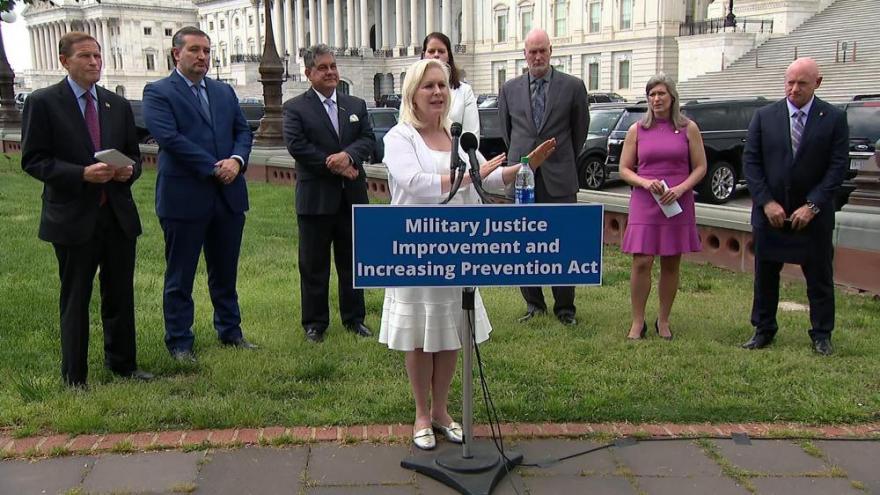 (CNN) -- A bipartisan group of lawmakers announced a plan to overhaul the way the US military responds to sexual assault cases, arguing it's time to change the way the cases are prosecuted to finally change a pervasive culture within the ranks of the US military.

On Thursday, Democratic Sen. Kirsten Gillibrand, Republican Sens. Chuck Grassley and Joni Ernst and others introduced a new bill aimed at cracking down on sexual assault in the military. The bill would make significant changes to how sexual assault cases are handled, moving the decision-making power on whether to bring felony-level charges from the chain of command -- a move that has been controversial in the past amid opposition from the Pentagon.

The bill would also take preventatives measures, including increasing training for all members of the military from ROTC to enlisted officers, as well as criminal investigators and military prosecutors, so they have the tools they need to work on sexual assault and domestic violence cases.

Lawmakers argue that after spending roughly $1 billion on in trying to tackle the issue over the last decade, little change has been seen.

"I still wish that we could keep this in the chain of command. I really do," Ernst told CNN. "But we are not seeing an improvement and this has gotten to a point where 'OK, we just need to make a change.'"

The new bill comes after years of work on the issue between Ernst and Gillibrand, and an evolution in the Senate where lawmakers have worked to change the culture of the military but argue they still haven't seen enough results. In 2014, Gillibrand led the fight to remove the decision to prosecute military sexual assault cases from commanders. The effort didn't fall along party lines, as she gained Republican supporters like Sen. Ted Cruz of Texas to her effort. But the bill ultimately fell short and failed to get 60 votes, 55 to 45, thanks to Democratic opposition from then-Sens. Claire McCaskill of Missouri and Carl Levin of Michigan, who was chairman of the Senate Armed Services Committee.

"We have been working on these reforms for eight years and all of the reforms that the Department of Defense have been comfortable with, haven't rendered results," Gillibrand said, noting they've won over colleagues who have seen not enough change over the last few years.

"They are tired of waiting and they think this more profound, robust reform is needed," Gillibrand said.

There's still a long way to go before the proposed changes become law. But there are signs that lawmakers who opposed the effort in 2014 may be more inclined to back it this time -- and Gillibrand may face less resistance from inside the Pentagon itself this time around.

Defense Secretary Lloyd Austin, who is a retired Army four-star general, announced there would be a 90-day review on sexual assault in the military, and the panel came back with a recommendation that military sexual assault cases should be taken out of the chain of command. The panel recommended that independent judges not the commanding officers should be charged with tackling the cases.

"Secretary Austin has said he will support this reform as his commander in chief has told him he wants him to," Gillibrand said.

For Ernst, her views on how to tackle military sexual assault have evolved in recent years. As a combat veteran and former commander herself, Ernst has been engaged in the issue since coming to Congress. But her own experience, paired with conversations she has had with her daughter, who is a student at West Point, made an impact in how she looked at ways to tackle this.

"You hear the stories and it's not just West Point, it's all of these service academies, it's in ROTC on college campuses, we need to be able to teach about these behaviors, what to watch for and how to prevent them," Ernst said.

At a press conference announcing the legislation with Gillibrand on Thursday, Ernst referenced her own experience as a sexual assault survivor.

"Once that sexual assault has occurred, you can't go back," Ernst said. "You can't change what has happened. And you will relive, as a survivor, you will relive that moment of your life, over and over again. And I can tell you it's not positive. So fact of the matter is, if we can stop a sexual assault from occurring, that's exactly where we need to focus a lot of our efforts."

Sen. Tim Kaine, a Democrat from Virginia, who is not a co-sponsor of the bill, but said that he has interest in learning more about it, said his views have been clarified in recent years as well, especially after a 2020 report found that sexual harassment and assault were pervasive at Ft. Hood. The report was conducted in the wake of the murder of Army Spc. Vanessa Guillén.

"I thought we owed it to the chain of command to try to solve this problem, but they haven't."