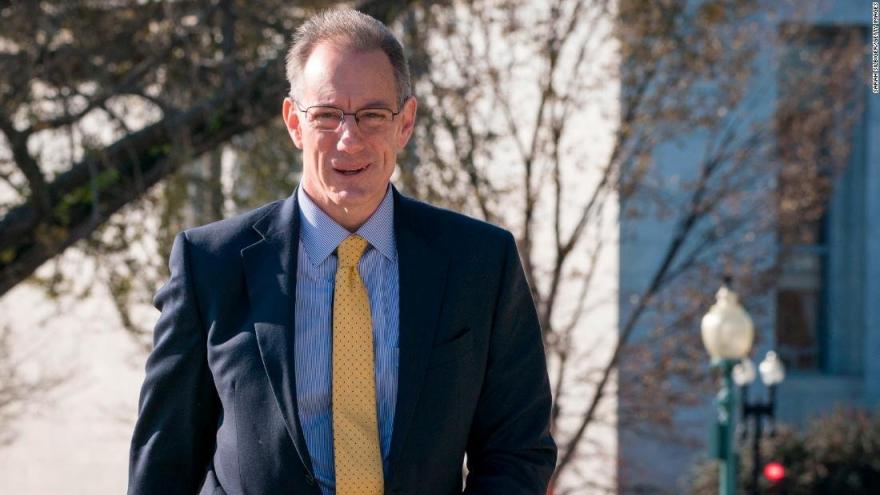 (CNN) -- A senior career official at the Office of Management and Budget testified on Saturday that he did not know why nearly $400 million in US military aid to Ukraine was withheld earlier this year, a source familiar with the testimony told CNN.

He spoke about how unusual of a process it was that a political appointee came in, took over the apportionment process and placed a hold on the military aid, the source also said. CNN previously reported that Michael Duffey, the OMB's associate director for national security programs and a Trump political appointee, signed at least some of the documents delaying aid to Ukraine, according to two sources. Normally a career budget official signs such documents.

Sandy received a subpoena Saturday morning to appear before lawmakers, after his attorney said he would be willing to testify so long as he was subpoenaed.

"In light of an attempt by OMB to direct Mark Sandy not to appear for his scheduled deposition, and efforts to limit any testimony that does occur, the House Intelligence Committee issued a subpoena to compel his testimony," an official working on the impeachment inquiry told CNN. "As required of him by law, Mr. Sandy is complying with the subpoena and answering questions from both Democratic and Republican Members and staff."

Sandy, who has served under both Republican and Democratic presidents, is the first OMB official to meet with impeachment investigators after others, like OMB director and acting chief of staff Mick Mulvaney, refused.

"It's with gratitude that we want to thank Mr. Sandy for coming in today and providing useful testimony," Rep. Eric Swalwell, a Democrat on the House Intelligence Committee, told reporters Saturday afternoon after Sandy had concluded his deposition. "As always, when witnesses come in, we learn more, and today we learned more, because Mr. Sandy honored his duty to cooperate in our investigation."

Swalwell said Sandy "cooperated and answered all of the questions that we had."

Political appointees in the office have fought subpoenas, declined to provide documents, and tried in other ways to stonewall the probe, which is focused on whether Trump withheld US military aid to pressure Ukraine to conduct investigations he could benefit from politically.

Russ Vought, who is the acting director of OMB and referred to the probe as a "sham process," ignored a request for a voluntary closed-door deposition and did not appear on November 6 -- the date House Democrats set for his subpoenaed testimony. OMB has declined to turn over documents to investigators.

Sandy is expected to have insight into internal conversations when the Trump administration was taking the unusual step of freezing nearly $400 million in aid to Ukraine over the summer -- before the President's July 25 phone call with Ukrainian President Volodymyr Zelensky.

A source familiar with the matter told CNN that Sandy did not know at the time why the aid was frozen.

The administration eventually released the military aid in September after congressional Republicans raised concerns and the White House was made aware of a whistleblower complaint about the July call.