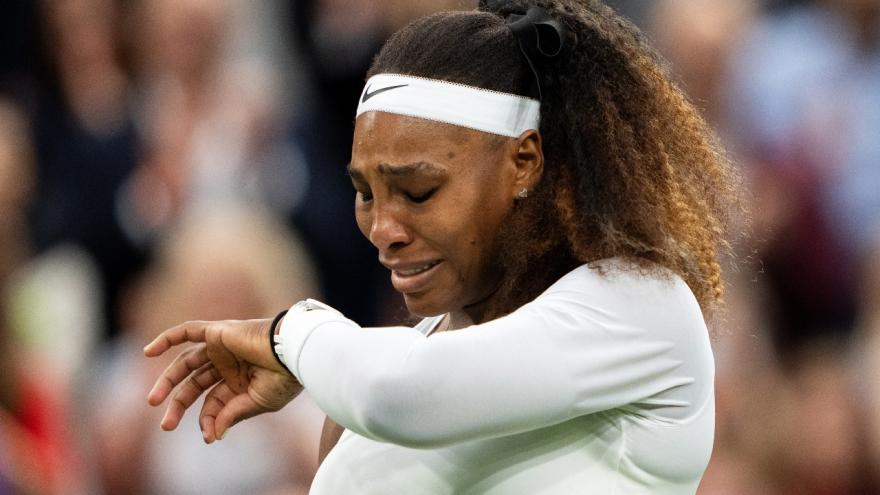 (CNN) -- Seven-time Wimbledon champion Serena Williams was forced to retire from her first-round match at the All England Club against Aliaksandra Sasnovich on Tuesday due to an injury suffered in the first set.

With Williams leading 3-1 in the first set, the 39-year-old American appeared to slip and hurt herself during a return.

Williams left the court to receive medical attention. After returning, with the match now tied at 3-3, Williams buckled at the baseline midpoint before gingerly walking off the court in tears, acknowledging the fans as she departed.

"Brutal for @serenawilliams but centre court is extremely slippy out there. Not easy to move out there," tweeted British tennis star Andy Murray.

READ: Federer says he 'got a bit lucky' after surviving Wimbledon scare

Williams was aiming to win a record-tying 24th grand-slam title and the forfeit marks her first ever first-round loss at Wimbledon.

Prior to Tuesday, the American tennis star had a 19-0 record in first-round matches at the famed tournament.

"It was such a nice atmosphere here, my first time on Centre Court," said Belarussian Sasnovich on court after the match, according to the Wimbledon website.

"Thank you everyone, but I am so sad for Serena. She's a great champion, but this happens sometimes in tennis. I wish all the best for her, and a good recovery.

"I like grass, I love England, I love English people, the public," added the 27-year-old Sasnovich. "I will do my best for sure. I will try to make you happy."