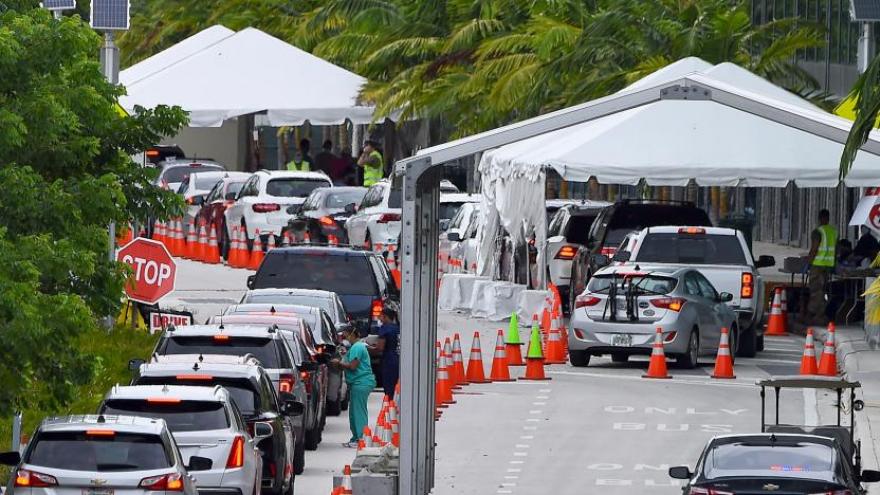 In this file photo cars line up for Covid-19 test at a "walk-in" and "drive-through" coronavirus testing site in Miami Beach, Florida on July 22, 2020.

(CNN) -- A bipartisan group of seven governors has joined forces with the Rockefeller Foundation to pursue a deal for 3.5 million coronavirus antigen tests, which would help create the country's first coordinated testing strategy in the absence of a national plan.

Maryland Republican Gov. Larry Hogan, chairman of the National Governors Association, negotiated the deal with the Rockefeller Foundation in "the first interstate testing compact of its kind among governors during the COVID-19 pandemic," Hogan's office said in a statement Tuesday. The 3.5 million faster-acting tests would be a significant haul as many states face surging virus caseloads and a subsequent uptick in testing delays.

Hogan, fellow Republican Govs. Charlie Baker of Massachusetts and Mike DeWine of Ohio, and Democratic Govs. John Bel Edwards of Louisiana, Gretchen Whitmer of Michigan and Ralph Northam of Virginia, have all signed on to the agreement, according to the statement, and "additional states, cities, and local governments may join the compact in the coming days and weeks."

Hogan announced later Tuesday that Democratic Gov. Roy Cooper of North Carolina would also enter his state into the group.

In terms of logistics, the involved states "are in discussions" with Becton Dickinson and Quidel -- the US manufacturers of antigen tests approved by the Food and Drug Administration -- "to purchase 500,000 tests per state," according to the release. The Rockefeller Foundation "stands ready to assist in facilitating financing mechanisms to support" the compact.

Most coronavirus tests look for the virus' genetic material, require a number of chemicals -- many in short supply -- to operate and can take hours to run. Antigen tests, meanwhile, are simpler and potentially less reliable but they can provide results in a matter of minutes.

Health experts have for months called for faster testing results to effectively track the virus' spread, and some states, labs and public health departments are reporting that turnaround times for diagnostic testing have slowed. CNN reported last month on some test results taking an average of four to six days for the general population or, in states like Arizona, up to three weeks.

The states' compact also comes following the British government's procurement "millions" of coronavirus tests that can provide results in under 90 minutes and detect several other common viruses, the UK's Department of Health said Monday.

Hogan in particular has pushed for a focus on testing since early on in the pandemic, acquiring half a million test kits with the help of his wife, Yumi, from her native South Korea as the state faced burgeoning cases in April.

He warned last month that coronavirus testing shortages and delays could make the pandemic even worse, adding that Maryland was still working its way through the South Korean tests, but would likely have to order more.

"We're still having, now with this resurgence here in the United States, massive problems with our testing program, which is still kind of a patchwork of different testing going on in different states around the country," Hogan told CNN's Christiane Amanpour at the time.

States have previously banned together in their response to the pandemic, forming their own regional pacts to collaboratively reopen from the stay-at-home orders each had issued to limit the spread of the virus.

This story has been updated to note that North Carolina joined the group later on Tuesday.