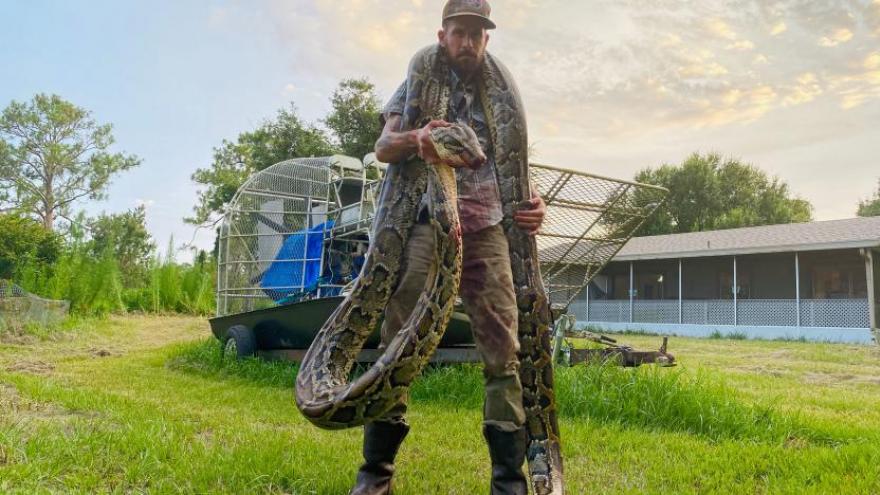 Mike Kimmel is pictured with the 17-foot python he caught draped around his neck.

(CNN) -- Mike Kimmel's no rookie to the python-hunting game. He's captured hundreds of the snakes, which usually measure up to 10 feet long.

But as soon he set eyes upon his latest catch, he knew it would be one to remember.

He headed to a secluded island where he spotted alligator droppings and a black snake -- but then came upon a giant python that he instantly knew was special. "My heart started pounding," Kimmel told CNN. "I've caught big ones before, but this one looked extra large."

He was definitely intimidated by the snake, he said, but he isn't known as the Python Cowboy for nothing. After a brief wrestle and a nasty bite, which was all caught in his YouTube video, Kimmel was able to grab the female snake's head and successfully drag her back to his boat, where he euthanized her.

Kimmel is waiting on state authorities for an official measurement. When he measured the snake at home, it was about 17 feet long and he estimates that it weighed about 130 to 150 pounds, he said.

The largest python captured in Florida was 18 feet, 8 inches long, according to the Florida Fish and Wildlife Conservation Commission.

The pythons began turning up in the Everglades in the 1980s, most likely abandoned by pet owners when they got too big to handle. Some may have escaped from a breeding facility destroyed during Hurricane Andrew in 1992.

Now wildlife officials estimate there might be as many as 100,000 pythons living in the Everglades. The snakes kill indigenous animals including racoons, otters, birds and even alligators.

Kimmel plans to sell the snake's skin on his website. He said he will also receive a payment from Florida's Python Action Team, which pays people to remove the invasive species.

"I was proud that I came out on top and I knew that I was going to get a good paycheck out of it," Kimmel said. "But most of all, a snake that size can really get to anything, so I was thrilled to get this dangerous predator out of the ecosystem."