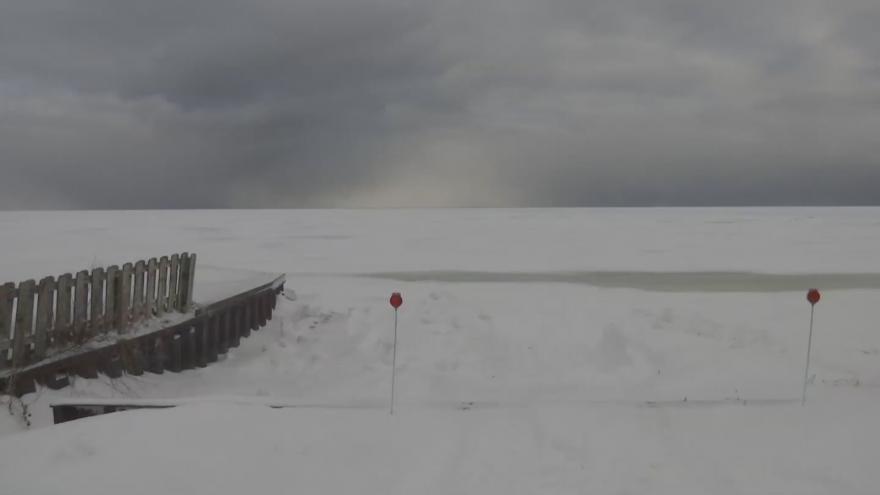 About a dozen fishermen had to be rescued after they found themselves stranded on a Saginaw Bay ice floe on Feb. 4 as bad weather moved in - WNEM

Sagniaw Bay, Michigan (WNEM) -- About a dozen fishermen had to be rescued after they found themselves stranded on a Saginaw Bay ice floe on Feb. 4 as bad weather moved in.

His agency was involved in an ice rescue on the Saginaw Bay on Feb. 4. Bernreuter called it a self-rescue with about a dozen ice fishermen and women finding their way back to shore after being caught on an ice floe.

"They all crossed open water on their machines to get to this side of shore," Bernreuter said.

Mark Pieniozek is a life-long Linwood resident who has fished these waters for 55 years. He said he knows the people who were rescued Thursday night.

"They packed their stuff up and by the time they got to the first crack, the crack had opened up to about 40, 50 feet. And a couple of guys made it across on their sleds. One guy didn't, but they got him out quickly enough and got him into a warm vehicle," Pieniozek said.

He said based on his experience, it's not a good idea to be on the ice right now, especially a mile or further offshore.

"We've had a lot of people just in the last four or five days go down, lose sleds, four wheelers. And some friends of mine have been picking them up for them and stuff. So, there's been a lot of things happening. A lot of people pushing the limit I guess," Pieniozek said.

Bernreuter agrees. He said there is a lot of danger out there.

"With the way the weather is and the cold is, you have minutes, not hours. You have minutes in the water before things start to happen and you're not going to get out," Bernreuter said.