Several people stabbed and 33 arrested as 'Stop the Steal' protesters and counterprotesters clash in Washington, DC 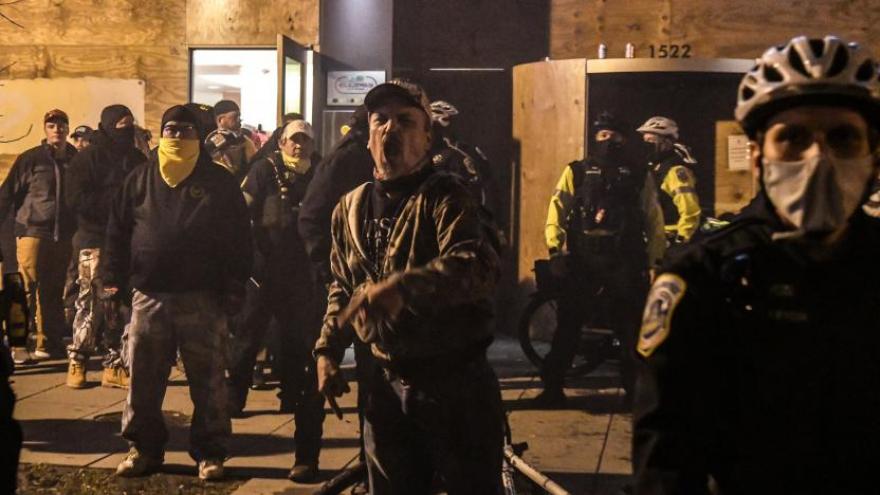 Members of the Proud Boys yell in front of a hotel during a protest on Dec. 12, in Washington, DC.

DC Fire and EMS transported at least nine from the protest area Saturday evening, including the four stabbing victims, who were said to be in critical condition, according to DC Mayor Muriel Bowser's office; two police officers with non-life-threatening injuries and two people with minor injuries, the public information office said Saturday night. DC Fire and EMS later confirmed it assisted an additional assault victim at 11th Street and F Street NW.

In all, eight members of the Metropolitan Police Department suffered injuries in connection with the demonstrations, according to an update from the office Sunday.

At least 33 people were arrested, the office said. Among them was a 29-year-old from Northwest Washington who was arrested on a charge of assault with a dangerous weapon.

Large groups of protesters and counterprotesters gathered earlier in the day outside the Supreme Court and at Freedom Plaza to protest the presidential election results. Most individuals were not wearing masks.

Six people were arrested for assault on police officers, 10 were arrested for simple assault, four for riotous acts, two for crossing a police line and one for possession of a prohibited weapon -- a Taser, the mayor's office said.

Videos circulating on social media showed scuffles and small fights had broken out sporadically, but the large gatherings were mostly peaceful.