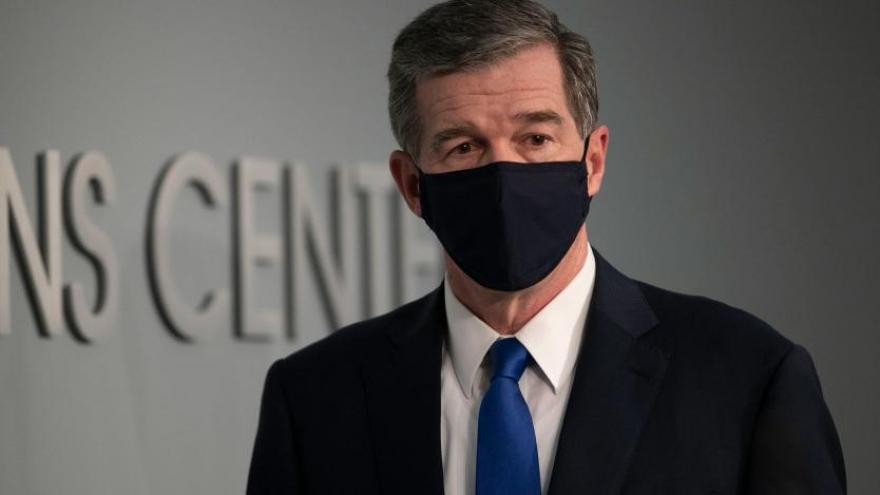 North Carolina Gov. Roy Cooper issued a statewide mask mandate which goes into effect on June 26. Three sheriffs in North Carolina have declared that they will not be enforcing the mandate.

(CNN) -- Three sheriffs in North Carolina have declared that they will not be enforcing Democratic Gov. Roy Cooper's statewide mask mandate despite a growing number of coronavirus cases.

Cooper issued an executive order on Wednesday that will require all people in the state to wear a mask in public, where physical distancing of 6 feet from other people isn't possible.

But the order, which goes into effect at Friday at 5 p.m., does not say how it will be enforced. Even if it did, sheriffs in Halifax County, Craven County, and Sampson County announced they wouldn't follow it.

"I certainly encourage people to be careful and take safety precautions, however your Sheriff's Office will not be taking enforcement actions to wit, issuing citations against people or businesses for not wearing masks. With each call, deputies will educate," Halifax County Sheriff Wes Tripp said in a Facebook post.

"The wearing of a mask is a personal decision," Tripp wrote, "not one of a governor in Raleigh."

Craven County Sheriff Chip Hughes posted a similar message on Facebook declaring that he will not take "enforcement actions against people or businesses for not wearing masks" and citing the US Constitution.

"My deputies will NOT enforce an executive order that I feel violates the constitutional liberties of citizens," Sampson County Sheriff Jimmy Thompson wrote in a post on Facebook. "I am not encouraging negligence, but I would like to reiterate that it is not the Sheriff's duty to enforce health related mandates unless court ordered by a Judicial Official or the Legislature."

CNN reached out to Cooper's office for his reaction but we haven't heard back.

The need for masks

The state's debate over masks mirrors the one playing out on the national level, as the need for masks to limit the spread of the virus clashes with individual Americans' desires to do what they want, how they want -- and no politician is going to tell them otherwise.

On Wednesday, Dr. Anthony Fauci said that wearing a face mask in public to limit the spread of the deadly coronavirus should not be a political issue.

The nation's top infectious diseases expert was asked during an interview at the Sacramento Press Club about the politicization of wearing face coverings, even as cases of Covid-19 continue increasing in more than 10 states.

"There's no secret formula for that, except to say get past it," Fauci said. "It should not be a political issue. It is purely a public health issue. Forget the politics — look at the data."

North Carolina's Republican lieutenant governor also said Thursday that he plans to sue Cooper for allegedly violating the state's Emergency Management Act with the executive orders he issued during the coronavirus pandemic.

In a letter to Cooper on Thursday, Lt. Gov. Dan Forest said the governor has "repeatedly ignored the law, enacting mandates that selectively target the businesses and citizens of North Carolina without concurrence from a majority of the Council of State."

"The North Carolina Constitution does not create a unitary executive, but rather disburses executive power throughout the Council of State," Forest wrote.

The governor said during a news conference that there has been a 56% increase in hospitalizations since May 19, and the CDC recently released a prediction which included North Carolina in its list of states that it expects death counts to grow.

North Carolina has at least 57,462 coronavirus cases and 1,336 deaths, according to a tally by Johns Hopkins University. Cooper extended Phase 2 of the Safer at Home order on Wednesday for an additional three weeks as a result of the recent spread.