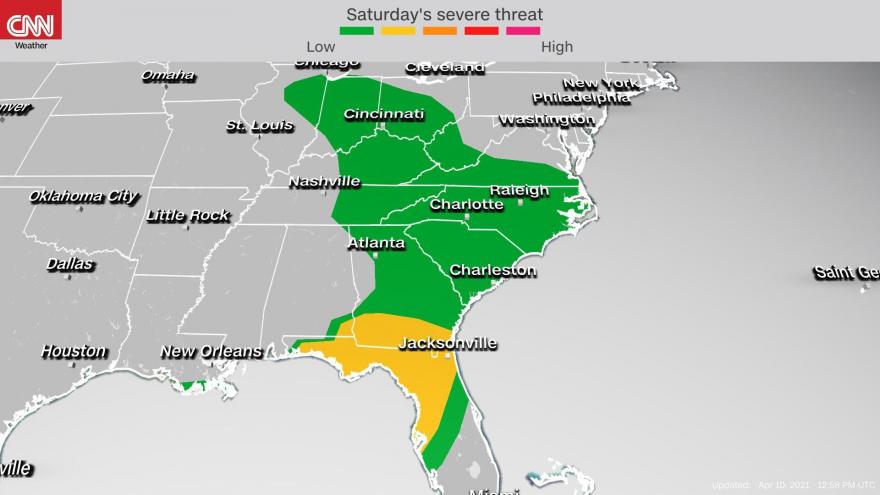 A level 3 out of 5 severe weather threat has been issued for parts of the Gulf Coast on Saturday, affecting nearly 6 million people in Louisiana, Mississippi, Alabama, and Florida.

Forecasters say the greatest danger in those areas is from damaging wind, but isolated tornadoes are possible, along with large hail.

Flash flooding is also possible along the Gulf Coast with storms moving through Saturday.

A wider level 1 out of 5 threat extends north into the Ohio River Valley and east to the mid-Atlantic, impacting over 60 million people. Strong thunderstorms with gusty winds are possible.

By Saturday night, the severe threat will begin to diminish. As the storms near the East Coast in Georgia and the Carolinas, they may dissipate while showers move into central Florida.

In Louisiana, a 48-year-old man died when a tree fell on his mobile home during high winds Friday night, said Caddo Parish Sheriff Steve Prator in a news release.

When deputies arrived shortly after 6:30 p.m., they "found a large tree on top of the mobile home where two people had been inside," the release said. The man was found inside, and the home had extensive damage inside and out, said the release.

A neighbor helped a woman out of the home after hearing the tree fall and then called 911, according to the release. The woman was not injured.

Sheriff's deputies reported strong winds in the area at the time of the incident, said the release.