She can't vote, but 2020 Democrats want her support anyway 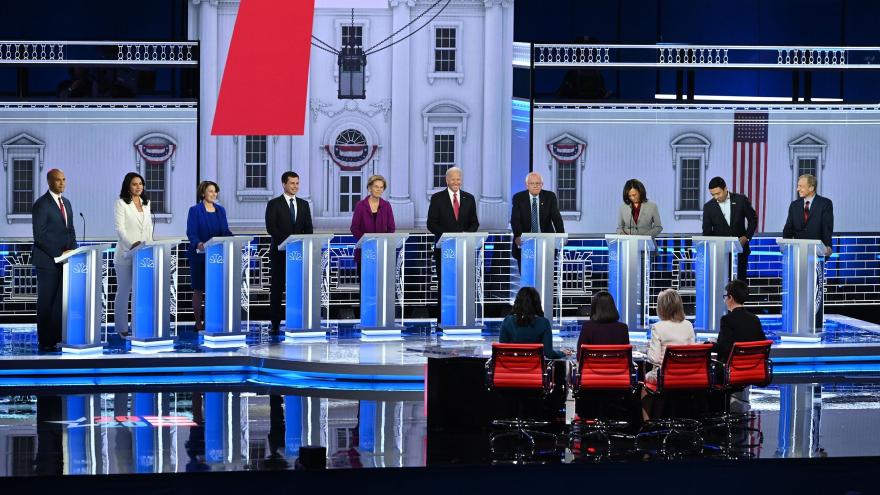 LAS VEGAS (AP) — One of the most sought-after presidential endorsements in a key early voting state is from a woman who cannot vote.

As Democrats jockey for support in Nevada, a meeting with Astrid Silva, a 31-year-old immigrant rights activist who has become a public face of the "Dreamers," is a can't-miss early stop.

Silva has had dinner with Kamala Harris, policy roundtables with Elizabeth Warren and Joe Biden, and vegan tamales with Cory Booker. Just this week, after Pete Buttigieg noticed she attended Supreme Court arguments on the program shielding her from deportation, the candidate called to make sure she knew he supported her cause.

"Presidential wannabes, when they come here —I don't know a single one that hasn't met with her," said Harry Reid, the former U.S. Senate Majority Leader, who helped elevate Silva's profile during his push for immigration reform. "There's no question in my mind that candidates are well served to visit with her."

Silva's busy calendar highlights the power of Latino voters in Nevada, the third state on Democrats' primary calendar. The state has a large immigrant community, and Latinos account for roughly 19% of the electorate, according to the Pew Research Center. Many of those voters are Democrats, making Nevada's contest a critical test of the candidates' appeal among a group with rising political power in the party.

While immigration has taken a back seat to health care and impeachment in the national primary debate, it remains on the forefront for Nevada Democrats, many of whom want candidates to have a plan to permanently protect Dreamers and offer a path to citizenship, among a host of other changes.

Silva, one of about 13,000 young immigrants in the state who are temporarily shielded from deportation under the Deferred Action for Childhood Arrivals program, has become a visible figure in the push for immigration reform since meeting Reid in 2009. President Barack Obama cited her in a 2014 immigration speech, and she spoke at the 2016 Democratic National Convention. In 2016, she declared Hillary Clinton's immigration plan to be the most feasible and endorsed her, helping Clinton as she won the Nevada caucuses and later carried the purple state.

Silva is wary of giving that stamp of approval easily.

Over the last several months, she has spent hours in private meetings in Las Vegas with the candidates, usually bringing with her a team of activists, immigrants and volunteer attorneys.

Over chips and salsa at family-run Mexican restaurants or, in Booker's case, vegan tamales and prayer at an altar in a local home, Silva has tried to focus the candidates on personal stories. She and others often describe the fears immigrants face and the complexities of the U.S. immigration system. They talk about sexual assault victims who are scared to report to police because they don't have legal status. They recount how family members were forced to leave and remain out of the country for up to 10 years before applying to legally rejoin their family.

Silva sometimes tells them her story, about crossing the border from Mexico at age 4 with her parents without legal possession. Until she was 26 and Nevada began issuing driver privilege cards to immigrants, she relied on the bus to get around sprawling Las Vegas. She runs a nonprofit that connects immigrants with support and legal help but says she ensures her family or friends can access her bank account to pay her bills in case her legal status changes and she ends up detained.

"Our literal everything is in somebody else's hands," she said. "I don't have a say over my life."

While meeting with candidates, her fellow Latino immigrants often give the 2020 hopefuls small tokens to remember them, like an image of St. Jude, the patron saint of lost causes, or an "escapulario," a devotional necklace featuring Our Lady of Guadalupe, the patron saint of Mexico, that's seen as a protection from bad things.

"They can't vote. The one thing they can give is their time and literally their treasures, which is their religious artifacts," Silva said.

Booker, Warren and Harris, who had several meetings with Silva, have released Dreamer plans that would use executive action to extend protections for those already covered and allow other immigrants, like Dreamers' family members, to apply for protection from deportation.

Sen. Bernie Sanders has proposed extending protection to parents of legal residents, along with placing a moratorium on all deportations and allowing those without legal status to get health coverage under his "Medicare for All" plan. His campaign has been working to set up a meeting with Silva.

Buttigieg and Silva spoke for about five minutes by phone on Sunday.

Biden, who has not released a detailed immigration plan, has called for Congress to grant citizenship to Dreamers.

But Silva remains concerned about the Democratic field. She's seen few candidates truly reaching out and organizing families in the immigrant community, she said. She worries that candidates will change their tune in the general election, when the fight shifts to the Rust Belt, where immigration is an issue that could drive some white working-class voters away.

Others worry about campaigns thinking one activist — or one issue — alone will unlock the Latino vote.

Like other voters, Latinos care about health care, education and climate change, among other issues, said Leo Murrieta, the director of the advocacy organization Make the Road Nevada.

While Silva plays an important role, candidates need to do more than meet with her "just to check off a box," Murrieta said.

"One person can't possibly be asked to represent an entire population," he said.

Meanwhile, Silva acknowledges the White House race has been overshadowed by the day-to-day struggles she and other immigrants are facing, which have intensified under the Trump administration.

The Supreme Court heard arguments last week about whether President Donald Trump can terminate the DACA program, and a decision is expected by the end of June. Opponents on the right argue DACA protections reward people who broke the law and encourage more people to immigrate without legal permission.

Moderate Republicans have backed a path to citizenship for Dreamers, but past efforts have collapsed in Congress.

"If my work permit is taken away," Silva said, "does it matter, my endorsement? Does it matter that I'm advocating for a candidate when I can't see my family?"

Catch up on the 2020 election campaign with AP experts on our weekly politics podcast, "Ground Game."