She could be the first Muslim woman in Congress 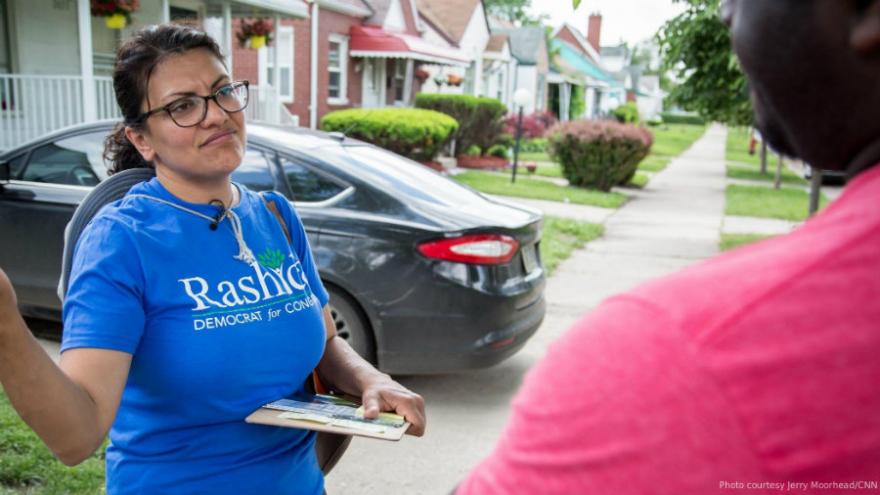 (CNN) -- Rashida Tlaib pulled her brown hair into a ponytail and changed into silver sneakers, a safari hat and a blue T-shirt that said "Rashida for Congress."

Tlaib is running to be the first Muslim woman in the US Congress. But first she has to beat a crowded field of Democrats vying for a congressional seat that hasn't been open in more than five decades.

So, for most of the hot June morning, Tlaib stalked the sun-baked streets of River Rouge, a small city near southwest Detroit, hunting for votes in Michigan's 13th Congressional District.

She noted the noxious smell from a nearby refinery, caught up with a motorcycle-riding classmate from Southwestern High School and commiserated with residents about broken streetlights and the construction of a bridge across the Detroit River into Canada.

No one asked Tlaib about religion, which was present but invisible, like the cool water she thought about but didn't sip because she was fasting for Ramadan.

"It's not about just being out there and flaunting your faith," said Tlaib, 41. "I always tell people that I'm exposing Islam in such a pivotal way, an impactful way, through public service."

Tlaib is one of many American Muslims talking about public service these days. More than 90 are running for office, from local school boards to the US Senate, as part of a "blue wave" of Democrats. At least five of the candidates for Congress are women.

People who follow religion and politics put Tlaib in the top tier of Muslim American candidates, saying she has as much chance as anyone to break one of the last religious barriers in Congress. The eldest daughter of Palestinian immigrants, Tlaib was already the first Muslim woman in Michigan's Legislature, where she served 2008-2014, before reaching term limits. She's now an attorney and advocate at the Sugar Law Center for Economic and Social Justice.

If you squint, it's possible to see Tlaib's campaign as the confluence of two midterm meta-narratives: the Muslim "blue wave" meets the year of the women, a perfect storm of progressive anti-Trumpism.

Like Alexandria Ocasio-Cortez, a political newcomer in New York who shocked the establishment by beating a prominent Democrat in the party's primary last month, Tlaib is taking an "aggressive and direct" approach to campaigning.

"We are basically running the same campaign, with the same platform and with a very similar candidate," said Andy Goddeeris, Tlaib's campaign manager. Both campaigns describe themselves as unabashedly progressive, and, rather than blanketing the airwaves with ads, have taken their message directly to tens of thousands of voters, meeting them on the streets of Detroit or a New York subway station.

Several of Tlaib's Democratic opponents are themselves accomplished women. And while Tlaib doesn't shy away from talking about her faith, it's not a big part of her pitch to her voters. Many Michigan Muslims live in Dearborn and Hamtramck, outside of the 13th Congressional District.

And it will take more than a meta-narrative to beat the four other Democrats vying for the same seat in Congress -- a seat held by one man, former Rep. John Conyers, for more than 50 years.

Which is why Tlaib knocked on doors all through a scorching June day, and returned to her campaign office late in the afternoon, looking like she had a pound of sand in her shoes.

Her one respite from the heat: a squirt-gun battle with a young aide named Andy.

The people who argue that Tlaib may be the first Muslim woman elected to Congress usually make the following points:

One, Tlaib raised more than $570,000 in the first quarter of 2018, staggering political observers and easily winning the money race among her opponents. Goddeeris, her campaign manager, said he expects Tlaib to raise a similar amount in the second quarter.

Secondly, many in 13th District already know Tlaib's name, since she was raised in the area and represented parts of it during her three terms in the Michigan Legislature.

"She's a perfect example of how to systematically build political power," said Zaki Barzinji, the White House liaison to American Muslims under former President Barack Obama. "She's not just jumping into a congressional race out of nowhere, she literally spent more than a decade working her way up."

"It's a lesson I wish our broader American Muslim community would learn," Barzinji continued, "because many folks get frustrated that we don't have representation at the highest levels of politics and government, when we rarely put in the effort to start at the ground floor and work our way up."

The third reason people argue that Tlaib could be the first Muslim woman in Congress has little to do with her. Michigan's primary is relatively early -- August 7 -- and Republicans haven't fielded a candidate. If Tlaib wins the primary, she wins the race. That gives Tlaib an edge against other strong Muslim American female candidates in other races across the country.

That includes women like Ilhan Omar, who is running to fill Rep. Keith Ellison's seat in Minnesota. Ellison left Congress to run for attorney general in Minnesota, leaving Indiana's Andre Carson as the only Muslim currently serving in Congress. Minnesota's Democratic primary is a week later than Michigan's and Omar will have a Republican opponent in the general election.

The other Muslim women running for Congress are Fayrouz Saad, in Michigan's 11th District; Tahirah Amatul-Wadud in Massachusetts' 1st District, and Deedra Abboud, who is running for the Senate in Arizona.

Hoda Hawa, director of policy and advocacy at the Muslim Public Affairs Council, said Omar and Tlaib are the most likely to become the first Muslim women in Congress.

"They've both run for office before and won. They know how to get elected," Hawa said. (MPAC does not endorse political candidates.

But before Tlaib can start planning for Washington, she has to beat a field of quality Democratic candidates, said David Dulio, chairman of the political science department at Oakland University in Rochester, Michigan. The congressional seat had been held by Conyers for 53 years, before he resigned in December amid allegations of sexual harassment.

Ian Conyers, the former congressman's grandnephew and a Michigan state senator, is running to fill the seat, as is Brenda Jones, the president of Detroit's City Council, and Bill Wild, the mayor of Westland, a small city in the district.

"There are so many quality candidates, and each brings different things to the table. Not much would surprise me," Dulio said. "Rashida Tlaib could certainly win this race."

Tlaib, meanwhile, has run to the left of Jones and the other Democrats, touting her experience as a lawmaker and public interest lawyer battling big companies over pollution. She's been endorsed by the party's progressive wing, including People for Bernie, filmmaker Michael Moore, and Justice for Democrats, the group that backed Ocasio-Cortez in her upset win in New York last month.

Before many people had heard of Ocasio-Cortez, Tlaib was already watching from afar, showing a reporter the New Yorker's campaign video last month.

"Rashida sees a lot of herself in Alexandria Ocasio-Cortez," said Goddeeris, the campaign manager.

"We feel like we are part of this wave that's coming: unapologetically progressive people who are unafraid of taking on the Democratic establishment."

Like many Democratic candidates, Tlaib hasn't been shy about taking aim at President Donald Trump. She calls his election the "bat signal" that provoked many progressive women to run for office.

Two years ago, Tlaib was arrested for disrupting a Trump speech in downtown Detroit, where she shouted at him that "our kids deserve better" and encouraged him to read the Constitution.

Tlaib dusted off her bullhorn last week to protest the Supreme Court's decision to uphold the President's travel ban on several Muslim-majority countries. A local news report showed Tlaib breaking up a spat between protesters and onlookers.

In public, Tlaib struck a combative tone on the Supreme Court decision, saying she'll introduce legislation to repeal it if she's elected to Congress.

But privately, Tlaib said the anti-Muslim rhetoric coming from some politicians and the media has taken a toll on her family. A mother of two boys, who are 6 and 12, Tlaib tells a story about seeing a political cartoon of a skeleton in a Nazi uniform saying "Allahu Akbar," the Islamic incantation that means "God is great."

One of her sons heard Tlaib talking about the cartoon and said, "Mama, don't worry, if anybody asks if I'm Muslim I will lie and tell them I'm not."

Tlaib said every time she tells that story to Muslim audiences, a few women approach her afterward and share similar experiences.

"I think there's a sense that we've worked so hard, but our children are struggling," Tlaib said, her eyes tearing. "It's very painful. And so people tell me, 'You gotta win, 'cause if you win, then our kids can see that we belong.'"

"That's the pressure I feel," Tlaib said, "and that makes me work harder every day."