She smeared blood on herself and played dead: 11-year-old reveals chilling details of the massacre 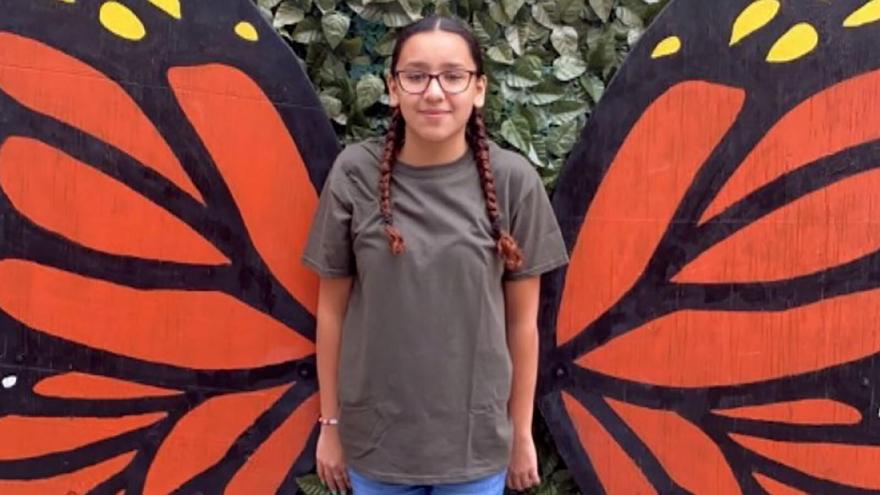 Miah Cerrillo, a 11-year-old survivor of the Robb Elementary School massacre in Uvalde, Texas, feared the gunman would come back for her so she smeared herself in her friend's blood and played dead.

(CNN) -- An 11-year-old survivor of the Robb Elementary School massacre in Uvalde, Texas, feared the gunman would come back for her so she smeared herself in her friend's blood and played dead.

Miah Cerrillo spoke exclusively to CNN about her horrific experience that day inside the classroom where the mass shooting took place that killed 19 of her classmates and two of her teachers.

Miah said she and her classmates were watching the movie "Lilo and Stitch" in a classroom shared by two teachers, Eva Mireles and Irma Garcia. The students were finished with their lessons when the teachers got word there was a shooter in the building, she told CNN's "New Day."

One teacher went to lock the door, but Miah says the shooter was already right there — and shot out the window in the door.

She described it all happening so fast -- her teacher backed into the classroom and the gunman followed. She told CNN he made eye contact with one of the teachers, said, "Goodnight," and then shot her.

He opened fire, shooting the other teacher and many of Miah's friends. She said bullets flew by her, and fragments hit her shoulders and head. The girl was later treated at the hospital and released with fragment wounds; she described to CNN that clumps of her hair were falling out now.

Miah said after shooting students in her class, the gunman went through a door into an adjoining classroom. She heard screams, and the sound of shots in that classroom. After the shots stopped, though, she says the shooter started playing loud music -- sad music, she said.

The girl and a friend managed to get her dead teacher's phone and call 911 for help. She said she told a dispatcher, "Please come ... we're in trouble."

Miah said she was scared the gunman would return to her classroom to kill her and a few other surviving friends. So, she dipped her hands in the blood of a classmate -- who lay next to her, already dead -- and then smeared the blood all over herself to play dead.

Miah said it felt like three hours that she lay there, covered in her classmate's blood, with her friends.

She told CNN she assumed at that point the police hadn't arrived on the scene yet.

She said afterward, she overheard talk of police waiting outside the school. As she recounted this part of the story to CNN, she started crying, saying she just didn't understand why they didn't come inside and rescue them.

Miah's mother said her daughter is traumatized and can't sleep. The child's parents have started a GoFundMe specifically to pay for her therapy.

In an effort to keep herself covered, Miah sat for the interview wrapped in a blanket, despite the warm temperatures.

A cellphone alarm accidentally went off during the interview, and Miah was visibly unnerved by the noise. Her mother said that's been happening a lot, and described an earlier incident where they were at a car wash and the sound of the vacuum cleaner "completely set her off."

Miah was too scared to speak on camera, or to a man, because of what she experienced, but she told CNN she wanted to share her story so people can know what it's like to live through a school shooting. She says hopefully it can help prevent a tragedy like this from happening to other children.

Miah's mother said she was born with a tumor in her abdomen and wasn't expected to live much past her birth. She underwent extensive surgery to remove the tumor at age three; her mother already called her a "miracle baby" and said that's even truer now.

Her mother also told CNN that the morning of the shooting, Miah had an earache and she took her out of school to go to the doctor. On the way back, they stopped at Starbucks for a treat and her mother offered to let Miah skip school the rest of the day since it was one of the last days of classes before summer break and they were just watching movies.

But Miah insisted that she wanted to return to school to see her friends, so her mother dropped her back off at school -- about an hour before the shooting.