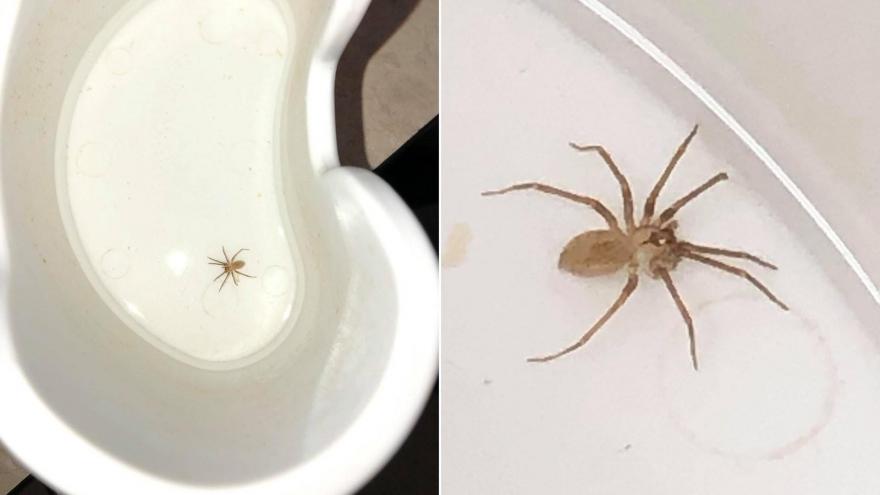 A nightmare come true: A Kansas City woman went to the doctor for what she thought was water in her ear. Turns out it was a venomous brown recluse spider.

(CNN) -- Susie Torres went to the doctor with what she thought was water sloshing around in her left ear. But water doesn't have eight legs, pincers and a venomous bite.

Doctors in Kansas City, Missouri, pulled a venomous brown recluse spider out of Torres' ear, and somehow, she kept her cool.

She woke up Wednesday morning with popping and swishing sounds in her ear. She decided to check it out after work, though she didn't think much of it at first, she said.

A medical assistant examined Torres' ear, then ran out of the room to grab more sets of eyes. Soon, two nurses, three medical students and a doctor joined the assistant in the tiny exam room to break the news--a spider had set up shop in her ear canal.

Remarkably, she stayed calm, even with the knowledge that a skittering spider was squatting in her head, she said.

"Seeing the instruments they were going to put in my ear started to make me panic," she said.

The doctor flushed her ear with water, but it didn't budge. Cue more panic.

After a few more tries, the doctor pulled it out in one piece and laid it out, legs flayed. They determined the invader to be a brown recluse spider, a nocturnal spider that can inject victims with a venomous fluid if it bites, she said.

"The nurses said it was dead, but they might've just said that so I wouldn't freak out," she said.

In some sort of miracle, the team informed her the arachnid skated down her ear canal without so much as a bite, she said.

She thinks it might have entered her ear while she was sleeping, so now she doesn't take any chances. She bought ear plugs shortly after her ordeal ended.

"I just didn't think it was possible for them to come inside the ear," she said. "Who would've thought?"

True to its name, the brown recluse spiders hides out in dark corners of logs and rocks. When they sneak inside, they tend to make their homes in closets, attics and, perhaps most frighteningly, shoes, according to the Centers for Disease Control and Prevention.

Common throughout the Midwestern US, they only bite if they're forced against the skin of their victim. They'll inject necrotic venom, which kills blood cells and, in severe cases, can cause limb loss. An Arkansas woman's leg was amputated in 2018 following a particularly nasty brown recluse bite.

Their bite is rarely fatal, but it's best to seek immediate help once a bite is spotted. The dark, central area of the rash that surrounds the bite is what causes tissue to die, and doctors can stop its spread with antibiotics, Neelendra Joshi, assistant professor at the University of Arkansas' department of entomology, told CNN in 2018.