She was fighting coronavirus and gave birth while in a coma. She met her baby five weeks later 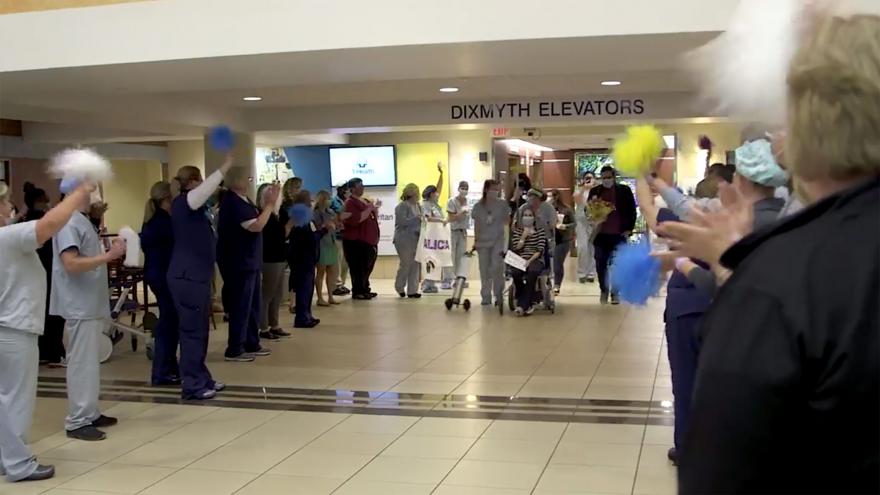 Source:TriHealth
(CNN) -- Alicia Kappers doesn't remember her contractions or her baby's first cries. Other than her newborn son, her only reminderof that day is the scar from her cesarean section.

She was 31 weeks pregnant when her husband took her to a Cincinnati, Ohio, hospital in late March. She had a cough, fever and it was getting harder and harder to breathe.

The novel coronavirus was putting a strain onher body and the 40-year-old mother would have to deliver her baby early while in a medically induced coma.

Kappers and her husband dreamed of giving a sibling to their 3-year-old son Zayne. Conceiving had never been an easy task for them and a pandemic was about to make thingseven more difficult.

She fought for her life on a ventilator

From putting together a nursery for the baby to having to hunker down at home because of the virus, the life of this family of three was already changing.

When her toddler first complained about fatigue and a fever in early March, Kappers nurtured him back to health without thinking it could be the virus. Then, her husband started having headaches, fatigue and lost his sense of taste and smell.

Kappers, who works as director of professional development at a Cincinnati law firm, started feeling sick about a week later. She started getting worried it could be Covid-19 when her condition continued deteriorating.

Razzak, 37, took her to TriHealth Good Samaritan Hospital on March 24 and within hours, his wife was on a ventilator. It was terrifying, he says.

"I don't know whether they thought she was going to pull through it," Razzak said. "We started discussing how to deliver the baby to make sure he was safe."

As Kappers battled the virus, doctors placed her on her stomach -- a method called prone positioning -- to help increase the amount of oxygen that was getting to her lungs and make breathing more comfortable. They also treated her with the experimental drug remdesivir as part of a clinical trial.

Nurses would call her husband every day at 6 a.m. and place the phone next to Kappers' ear. She was sedated but for a few minutes, Razzak would tell her about their toddler and recall funny memories. It was his way of trying to cheer her up and motivate her to keep fighting while alone in the hospital.

When Kappers started to have contractions -- more than two months before her due date -- doctors decided it was time to deliver her baby. She had to give birth while in a medically induced coma.

"At the time, I was a little upset for her sake ... because she was going to have this baby and wouldn't get to meet him for so long," Razzak said. "It was not the way this delivery was supposed to go."

They couldn't touch their son right away

Neither of them could meet their newborn son, Laith, right away.

After giving birth, Kappers' health improved but it was a slow process. She had been connected to a ventilator for weeks and got a tracheotomy to help her wean off the sedatives.

"I just remember looking down as I went to the bathroom for the first time (since waking up) and thinking 'Oh my Gosh, I have a scar there that I never had before,'" Kappers said. "It was the C-section."

Razzak had been in the middle of a 14-day coronavirus quarantine when his son was born. He was cleared and the newborn's Covid-19 test was pending when they met each other. Razzak says he was in an isolation room, wearing a face mask, goggles and a protective suit when he held Laith for the first time.

He couldn't touch his skin but "it was still better than nothing," Razzak said.

The newborn boy has since tested negative for the virus.

Going home without him

Nurses and medical staff at TriHealth Good Samaritan Hospital cheered and waved blue, white and yellow pom poms last week as Kappers was wheeled out of the hospital.

They had helped celebrate Kappers' 40th birthday, cared for half their family with compassion for more than a month and now, they were giving them a heartfelt farewell -- just as if they were family, Razzak said.

But it was a bittersweet send off. Kappers had to go home before meeting her son, who was still in the hospital.

When Razzak brought Laith home a couple of days later, he carefully placed him on Kappers' lap.

Kappers defeated the virus and is now able to walk without help but has not fully recovered. She's on light oxygen, is working to regain her strength and has difficulty talking because she's healing from the tracheotomy.

While she is happy to be home and is overjoyed to have her family finally together, Kappers says she feels "mother's guilt" because she can't pick her son up and she can't take care of him herself.

"I feel guilty but I have to understand that he basically saved my life," Kappers said.