Shipping containers in Los Angeles becoming homes for the homeless 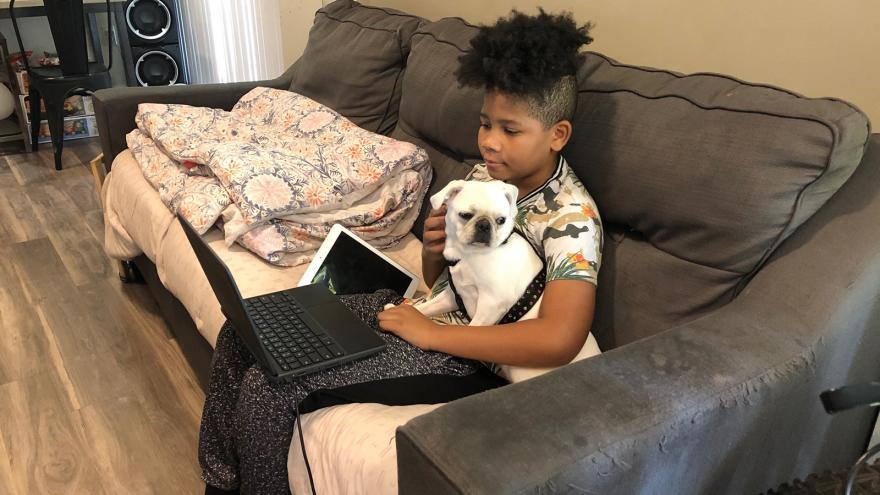 CNN) -- Jonelle Kilgore tapped away at his online homework with Jasmine the puppy on his lap in their South Los Angeles home.

The 12-year-old boy and his dog sat on a couch in not just any home, but one made from four recycled shipping containers.

"I like it, I liked moving in here," Jonelle told CNN on a recent September day. "It's a home for us."

Two years ago Jonelle, his father John and four siblings received the keys to their four-bedroom container apartment and it seems like a glimmer of hope in the quest to get Los Angeles County's estimated 66,000 homeless residents off the streets.

John Kilgore said his family constantly moved from floor to floor and the couches of anyone who would take them in. That is, until he got a call from homeless advocates that he'd been approved to move into a recycled shipping container home.

"When we walked in, man! Their faces lit up," John Kilgore said of his family's reaction to the new home. "They were all smiles and so happy. And that made me happy."

Recycled shipping containers are a cheaper alternative and faster way to provide much-needed housing to homeless families and veterans, and others who may be experiencing hard times, including during the coronavirus pandemic.

Besides four bedrooms, the Kilgore's furnished unit has one bathroom, a kitchen and a small front room.

Their complex of stacked shipping containers is made up of seven other units, housing 32 people, a community room and a room for a resident manager.

John Maceri, CEO of The People Concern, a homeless services agency and key partner on the project, explained that an on-site social worker helps the formerly homeless tenants with everything from how to pay rent to arranging transportation and obtaining health care.

"That manager is a facilitator and connector to community resources so that people reintegrate back into the community," Maceri said.

The Kilgore's complex was built by Flyaway Homes, which describes itself as a non-profit organization aimed at finding solutions to the homeless crisis.

Flyaway homes reports a second refurbished container project is under construction in South Los Angeles, and three others are in the pipeline.

Hirai says the second complex being built will include 16 two-bedroom units that house up to 33 people, including unrelated roommates, like in a college dormitory. Other shipping container units are rising up throughout the country and world, including in Detroit, Washington DC and Puerto Rico.

Shipping container apartment complexes for veterans who are homeless have been built in Orange County California and Las Vegas, Nevada.

Clifford Beers Housing is teaming with American Family Housing to construct the five story Isla Intersections wedged into a lot near Harbor Freeway Station on the Metro in Los Angeles.

Containers: You can move them, stack them

Builders say shipping containers can easily be moved and stacked, allowing the units to fit varying and odd sizes of land parcels.

The Beers website says Isla Intersections will offer 53 affordable studios to people earning less than 40% of the area median income and one apartment for management staff.

Hirai of Flyaway Homes says the value of the containers is they can quickly be converted to residences, because the design, permitting and construction process is shorter and more simple to complete.

"So our target (construction completion) would be 12 to 15 months from site acquisition, that's in the ideal world," Hirai said.

Flyaway Homes reports it received grants of $1 million from Los Angeles County and nearly $20 million from the city of Los Angeles, as well as private funding for its projects.

In John Kilgore's shipping container home, he recovered from open heart surgery -- something that he could not do easily if he was still homeless.

He smiled when he reported great academic and other successes for all of his five children with the initials J.K.: John'son 16, Janiya 16, Ja'onna 15, Jonelle 12 and Jareesa 11.

"You walk in here and you don't see a shipping container, you see a home," said a glowing father. "I'm a fan because this take a lot of pressure off, raising kids."

Correction: A previous version of this story incorrectly reported the first name of John Maceri, the CEO of The People Concern.