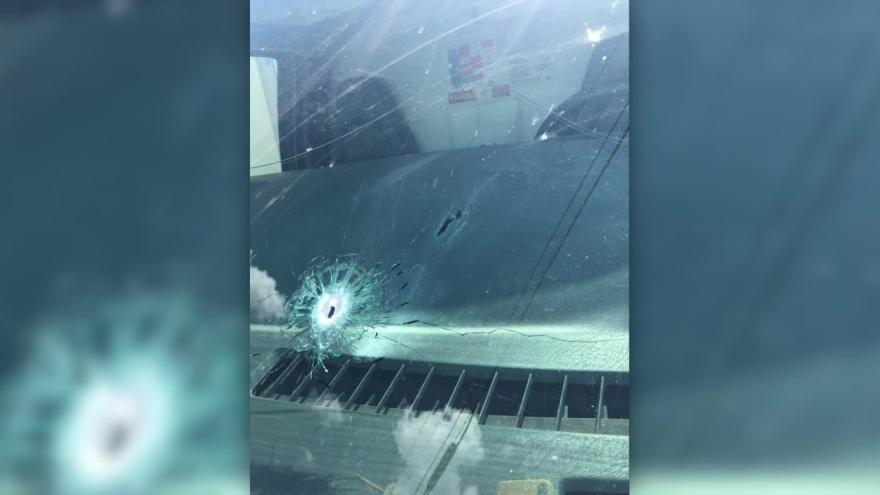 (CNN) -- At least five people were killed and 21 people injured Saturday when a gunman in West Texas drove around shooting from his vehicle, authorities said. The shooter was later killed by law enforcement officers, Odessa Police Chief Michael Gerke said at a news conference.

The suspect was driving one vehicle and at one point ditched that vehicle, taking over a United States Postal Service mail truck, Gerke said.

Officers made contact with the suspect at the Cinergy movie theater between Midland and Odessa. The suspect and officers exchanged gunfire and the suspect was shot and killed, he said.

Gerke said the subject was identified as a white male in his 30's. His name and motive were not given.

"That's when he shot the officer and then took off and started shooting randomly," Morales said. "Everything happened after that."

Law enforcement officers "trapped him in the parking lot of the Cinergy theater, and that's when they were able to engage him," Morales said.

Earlier in the day, authorities said they were looking for two possible shooters in two separate vehicles: a gold, small Toyota truck and a US Postal Service van.

Devin Sanchez, a spokesman for the City of Odessa, said someone in a gold Toyota was driving around shopping centers and shooting people from his vehicle.

Live updates on this shooting

A law enforcement official told CNN that agents from the FBI's Midland office are responding to assist with the incident. The Midland office is a satellite office of the FBI's El Paso division.

The US Bureau of Alcohol, Tobacco, Firearms and Explosives in Dallas tweeted that agents would respond to the shooting.

Midland Memorial Hospital is currently on lockdown, and it is treating patients following the active shooting situation in Odessa and Midland, according to a post on their Facebook page.

According to a tweet, the University of Texas Permian Basin is on lockdown.

"We are closely monitoring the ongoing active shooter incident in Midland/Odessa, Texas"

Only four weeks ago, a gunman killed 22 people in a mass shooting in El Paso, located about 285 miles to the west of Odessa.

"The First Lady and I are heartbroken over this senseless and cowardly attack, and we offer our unwavering support to the victims, their families, and all the people of Midland and Odessa. The state of Texas and the Department of Public Safety are working closely with local law enforcement to provide resources as needed and deliver justice for this heinous attack.

"I thank the first responders who have acted swiftly and admirably under pressure, and I want to remind all Texans that we will not allow the Lone Star State to be overrun by hatred and violence. We will unite, as Texans always do, to respond to this tragedy."

One car involved in shooting. Photo courtesy of Ernest Villanueva.

One car involved in shooting. Photo courtesy of Ernest Villanueva.