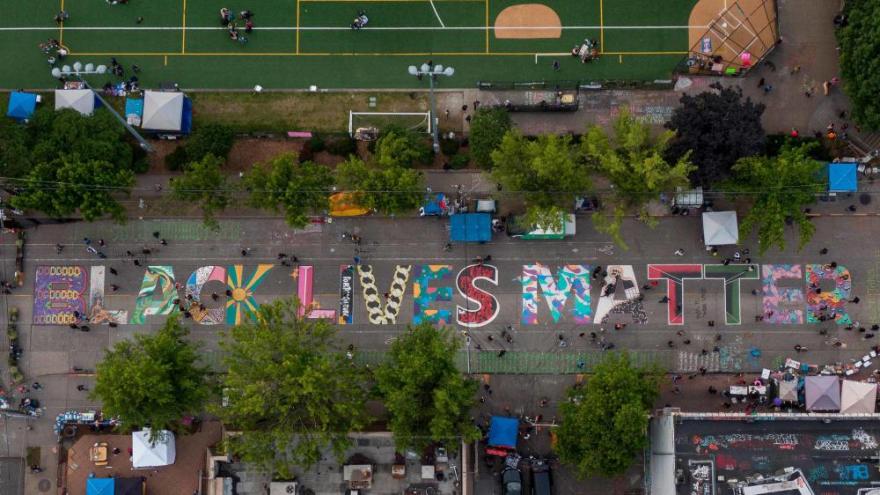 Seattle police say a "violent crowd" prevented them reaching two shooting victims -- one whom later died -- inside the city's autonomous protest zone Saturday. This photo shows an aerial view of a Black Lives Matter mural in the so-called "CHOP," an area that protesters have called both the "Capitol Hill Occupied Protest" and the "Capitol Hill Organized Protest, on June 14, 2020 in Seattle, Washington.

Officers responded around 2:30 a.m. local time Saturday to a report of shots fired at Cal Anderson Park inside the area referred to as the Capitol Hill Organized Protest (CHOP) or Capitol Hill Autonomous Zone (CHAZ), according to a police statement.

"Officers attempted to locate a shooting victim but were met by a violent crowd that prevented officers safe access to the victims," the statement reads. Police said they were later informed that CHOP medics had taken the two victims to hospital.

Officers went to Harborview Medical Center where they were told a 19-year-old male had died from his injuries. Police said the other shooting victim -- a male -- remains in the hospital with life-threatening injuries.

The suspect or suspects remain at large.

"Homicide detectives responded and are conducting a thorough investigation, despite the challenges presented by the circumstances," the police statement says.

Police boarded up the East Precinct building in the Capitol Hill neighborhood and left it unoccupied after tensions with demonstrators reached boiling point during protests over the police killing of George Floyd in Minneapolis.

On Monday, Seattle Police Chief Carmen Best denied claims that officers in her department had been instructed not to respond to 911 calls in CHOP.

Best told CNN on Monday, "Seattle is not under siege and we are responding to every call and every area of the city." She acknowledged that barricades in the zone could slow police access.

When CNN visited the zone last Sunday, reporters found a festival-like atmosphere, with meditation and painting. Some people in the zone openly carried firearms, which is allowed in the state of Washington.