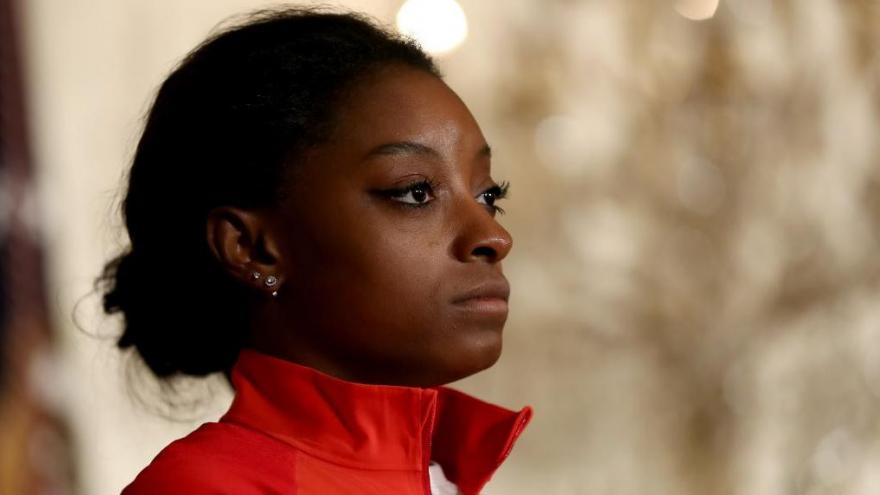 (CNN) -- On the eve of former USA Gymnastics team doctor Larry Nassar's sentencing for sexually abusing girls in his care, American gymnast Simone Biles has come forward to say me, too.

"I, too, am one of the many survivors that was sexually abused by Larry Nassar," she said Monday afternoon in a Twitter post with the hashtag #MeToo.

"There are many reasons that I have been reluctant to share my story, but I know now that it is not my fault."

More than 140 women and girls have accused Nassar of sexual misconduct, including Aly Raisman, Gabby Douglas and McKayla Maroney -- members of the 2012 "Fierce Five" that won the gold in 2012.

Nassar was the team doctor for USA Gymnastics through four Olympic Games, treating hopeful young gymnasts and gold medal winners alike. The basic facts of his case illustrate the drive of the #MeToo movement. Scores of women say they were abused by a respected man and then pressured into silence by powerful institutions.

"For far too long I've asked myself 'Was I too naive? Was it my fault?' I now know the answer to those questions. No. No. It was not my fault. No, I will not and should not carry the guilt that belongs to Larry Nassar, USAG, and others," she said Monday.

"After hearing the brave stories of my friends and other survivors, I know that this horrific experience does not define me."

Nassar faces sentencing on Tuesday in Michigan state court after pleading guilty in November to seven counts of criminal sexual conduct. In his plea, he admitted that he used his position as a trusted medical professional to sexually abuse young girls.

Several days have been set aside in Nassar's sentencing so the court can hear from up to 125 victims or their parents.

Biles' teammates and others have repeatedly accused USA Gymnastics of complicity in Nassar's abuse. In a lawsuit, Maroney said USA Gymnastics paid her to be quiet about the abuse, which she said began when she was 13.

University of Oklahoma gymnast Maggie Nichols said she and a coach reported abuse by Nassar to USA Gymnastics in 2015, a few years after Nassar began treating Nichols for a back injury.

Nassar worked at Michigan State University from 1997 to 2016 as an associate professor, and he served as the gymnastics and women's crew team physician. Under the guise of providing medically necessary treatment, Nassar abused many of his patients. He admitted in court to inappropriately touching patients in cases going back as far as 1998 -- including girls under age 13.