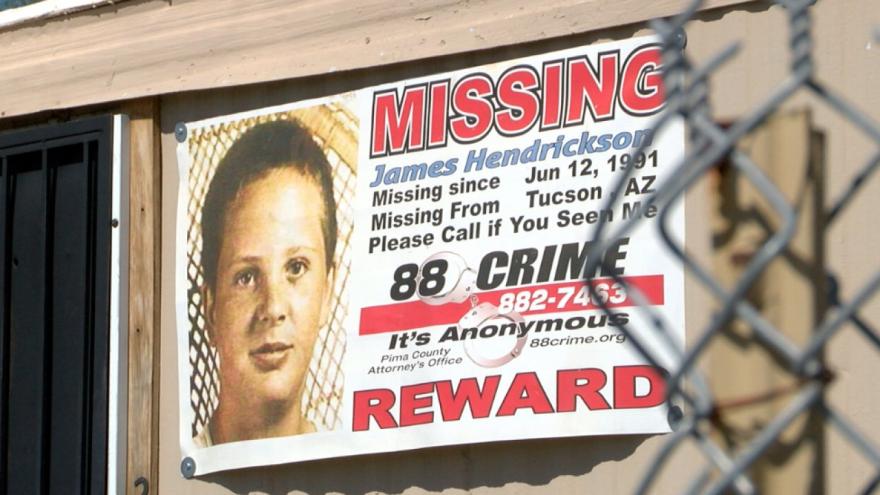 Jimmy was 12 years old at the time, and was known for his blue eyes and blonde hair. However, it was his humor that his sister, Tammy Tacho, loved and remembers most.

"He liked to tell jokes, play jokes, it was never a dull moment when he was around," said Tacho.

Tacho remembers the day she and her mom last saw her younger brother. Tacho had just started dating a boy who had wanted she and her mom to go down to Douglas to meet his family.

Jimmy told Tacho and her mom he didn't want to go with them, so they decided to let him stay behind with a trusted family friend, Angelica.

"We could still see him out of the back of the station wagon waving at us, in those red sweat pants, who would have known that would be the last time we'd see him," said Tacho.

Tacho said Jimmy and Angelica, the family friend, along with others, had gone to a football game at a local school that night. They had also gone to a barbecue and later that night that trusted family friend had allowed Jimmy and another boy to sleepover with Angelica's cousin.

"So, I guess Angelica thought it was OK to let Jimmy and little Justin at the time, go to her sister's house with this cousin and they were going to fix a fence in the morning and she was going to go pick them up," Tacho said.

The next day, Jimmy was nowhere to be found.

"They did make a police report that day because he was 12 years old. Remember it was 1991, he was considered a runaway, he wasn't even missing at that time," Tacho said.

Speaking through tears, Tacho said one of the hardest parts for her was finding out about Jimmy's disappearance days after it had happened. She recall exactly how she and her mom found out.

"We stopped at the Triple T parking lot and there was a payphone there and momma said 'you call my job and tell them I'm just coming in'. So I called housekeeping and Trish was her boss and I said 'Hey Trish, my mom's very nervous, we had the car breakdown, we're just getting into Tucson she'll be there tomorrow,' and she said 'Oh no, you haven't heard? Who have you called?' 'We just called you,' and she said 'Jimmy's missing,' and we said 'What?' she said 'Jimmy's missing, you need to come to me now," said Tacho.

After hearing what happened, Tacho she said she and her mom rushed to talk to police.

Tacho was 17 years old when her brother, Jimmy, went missing. She said she remembers having to grow up overnight.

She said her mom wasn't much of a talker and she felt like she had to be the one to lead the search for Jimmy.

Tacho said she spent many days and nights wondering where her little brother was. Wondering what she could do to find him, searching for any sign of where he could be. Many times she said she plead with her mom for answers.

“Then your heart starts going, well is he gone, and you look to your mom and you tell her, momma you know, if he’s gone just tell us how you’re feeling, so we know what to do with our emotions and my momma lied to us for so many years she said that she felt like he was out there and to keep searching for him and keep looking for him," she said.

She said over the years her mom's struggle only continued to grow.

"She was trying to find him she was crazy. She blamed herself for everything, everything and then she became psycho with us like we couldn’t go nowhere we couldn’t do nothing," Tacho said.

When Jimmy first disappeared back in 1991 police listed him as a runaway. Tacho said foul play wasn't considered until much later.

A year after Jimmy's disappearance Tacho said not much had changed when it came to finding Jimmy.

"No there was no progress. We were just still doing vigils, candlelight vigils, and passing out flyers,” she said.

In 2016, 25 years after Jimmy had disapearence, Tacho said she decided she wanted to take some action. She wanted to find out every single detail she could about what police knew when it came to her brother, so she went directly to police.

"I got that police report when Jimmy was 25 years missing," she said, “I call it Jimmy’s bible because it’s so thick and it has so much information in it.”

The police report is about one inch thick. It includes statements taken by Tucson Police Department officers, tips different people had called in, some of it from back in the day.

Tacho said when she first got her hands on the police report she couldn't get herself to read it, so her husband did.

She said he suggested she take her time with it, because he knew there were some things in the report that would upset Tacho, but despite that recommendation, she read it front to back and came to her own conclusions.

"I’m very upset because once you read that report you know Jimmy is no longer missing, you know he’s been gone since that night that he disappeared.”

Tacho said years ago a person told one of her kids they knew what happened to Jimmy. She said she met up with this person who told her that her brother was no longer alive.

She said she asked this person to submit a tip to 88-CRIME, she said not much ever came of this information.

Tacho said she's endured a lot during the last 28 years since Jimmy went missing. She said that while at first she truly believed Jimmy would come home, that mindset has definitely changed.

Now, Tacho says she just prays for justice. She prays police get a big break and bring the person who she believes hurt her brother in, so she, her mom, and her brother can give Jimmy a proper place to rest.

If you or anyone you know have any information relating to the disappearance of James "jimmy" Hendrickson, who was reported missing on June 12, 1991, please call 88-CRIME.