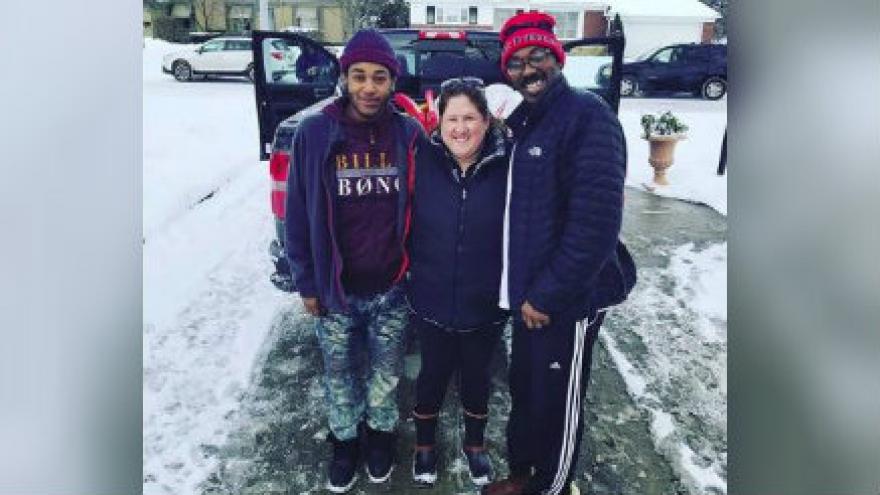 (CNN) -- Erica Guido lives in one of Detroit's most affluent suburbs. But she spends most of her time in the city's poorest areas, distributing life's necessities. Whether it's hot meals, clothing or furniture, this 39-year-old mother of two delivers -- literally.

For Guido, giving is part of her DNA.

When a friend asked her to provide moral support to a woman in need, she jumped at the opportunity.

"I called her and found out she was homeless, so I reached out to my community," Guido said.

She collected enough furniture to fill her garage and a room inside her house.

"I had people coming and dropping things off and donating money and just wanting to support her."

But at the last minute, the woman refused help.

"So I thought, 'My God what am I going to do with all this stuff?'"

She decided to take the items to Capuchin Services Center Warehouse, a local organization that helps struggling families. While Guido's truck was being unloaded, a woman approached her and asked for an upholstered chair in the back.

"She had no means to deliver because most organizations do not deliver. So I said, 'We'll bring it to you.'"

Guido discovered the woman had more needs. She took down a list, created a private Facebook group and asked friends to donate the items.

"That's when it took off," Guido said.

A web of donors

Guido knew there were other people in need who lacked transportation to bring donations home. So with a cellphone and Facebook, she created a system to get help to where it is needed. It works like a referral process.

To connect needy people with donors, Guido gathers their wish lists and posts them on a closed Facebook group for donors called To Detroit, With Love.

From there, donors can schedule a pickup or drop off items on Guido's front porch. So far the donor group has more than 1,500 members.

"They need help, and a lot of people here, they want to do that. They just don't know how," said Guido.

Guido said she spends upwards of 12 hours a day, six days a week making personal deliveries in her husband's pickup truck. She said it's a labor of love.

"The personal relationship is the most important part to me."

Christine Grant, a single mother of five, connected with Guido through a random conversation her brother had on a bus. Grant wound up homeless after losing her job and suffering an injury that led to a series of surgeries. She eventually found a place to live. Guido found Grant and her children beds, a dining room table and much-needed winter clothing.

"Everything that my family needed she made sure I got it," Grant said. "You never know what somebody is dealing with on a daily basis. It's always best to do what you can and do not judge."

Although she lives in the upscale Grosse Pointe community, Guido came from humble beginnings.

She grew up on Detroit's east side in small bungalow, and she remembers her mother struggling to make ends meet.

"Having grown up on the other side of the tracks I know what it's like," she said.

"I think we take it for granted, we think things are so easy to come by."

It's those memories that motivate Guido.

"I feel very grateful and honored to be able to be in their home, be part of their life, hold their babies ... you know, be a friend."

Guido is focused on growing her philanthropic reach. She's working with a lawyer to establish a 501(c)(3) nonprofit and hopes to eventually secure a warehouse and a cargo van.

"If each family of means took on one family, one household with a single mother and a few kids, and just helped ease their burdens, it's amazing what we could do."