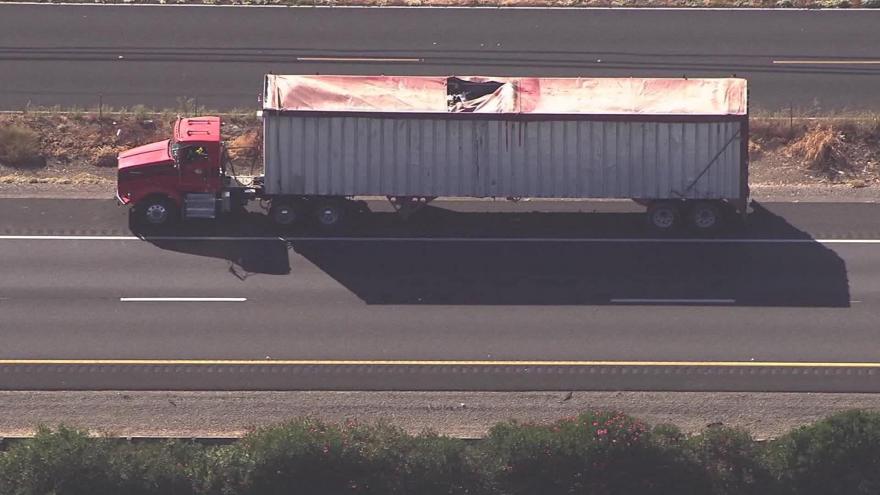 **Embargo: Sacramento-Stockton-Modesto, CA** A skydiver was killed Thursday after landing on southbound Highway 99 in Northern California and being struck by a big rig, authorities said.

(CNN) -- A skydiver was killed after she hit a big rig trailer and crash-landed on a Northern California highway outside an airport.

Conditions were windy when the group took off from the Lodi Parachute Cente, and the woman crashed into the truck during the skydiving group's descent near the Lodi Airport, Jones said.

Then, she hit the right-hand shoulder of the road, the California Highway Patrol said in a Facebook post. The unidentified woman was pronounced dead at the scene.

The other six people in the group survived, according to CNN affiliate KCRA.

The station spoke to Lisa Reyes, who was driving with her father and brother on Highway 99 when the woman crashed.

"The way the person was struggling, just struggling against the wind and their body was just moving really, really fast," she told the station.

The woman was an "experienced" skydiver with 155 jumps, according to the owner of the parachute center, Bill Dawes.

The conditions were "a little bit gusty," Dawes told reporters Friday, at about 15 or 20 mph. But the windspeeds were "well within the limits of her experience."

"We've jumped in winds much higher than that," he said. "Everybody else on the load landed in the right place. For whatever reason she just went too far downwind, is the expression we use."

There was nothing wrong with her parachute, he added.

Dawes stressed that, once a skydiver has gotten their "A" license after 25 jumps, it was up to his or her discretion about what conditions they'll jump in. "You're on your own, you're doing what you want to do," he said.

Asked if it gave him pause when there was a death, Dawes said, "Of course it does."

CHP is investigating the incident.

The Feed: Celebrities singing in self-isolation