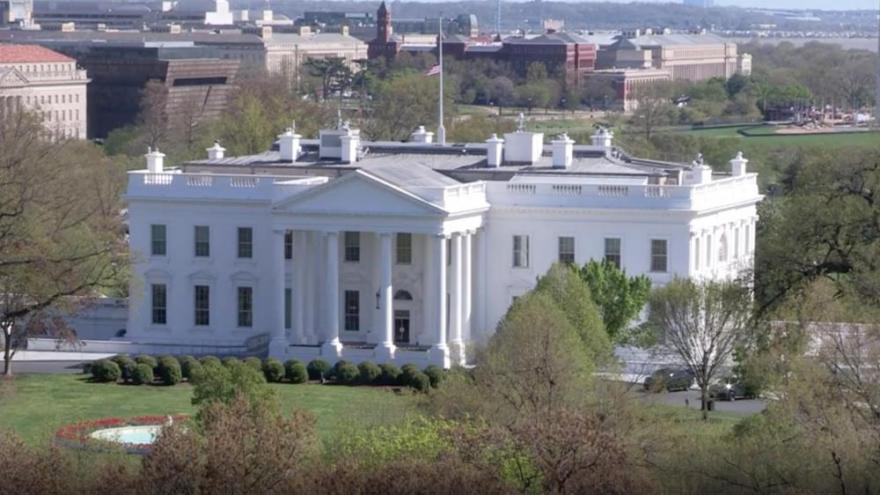 The White House was briefly placed on lockdown Tuesday morning after an aircraft entered restricted airspace in the Washington area.

(CNN) -- A "slow-moving blob" that may have been a flock of birds triggered a lockdown of the White House and caused the US Capitol to be placed on "restrictive access" Tuesday morning.

Senior national security officials across the agencies convened to coordinate and monitor the situation after the mysterious "blob" was seen on radar at the Capitol Police command center flying just south of the National Mall, according to a law enforcement source.

Military aircraft were scrambled in response.

Initial assessments indicated that the "blob" was an unauthorized aircraft entering restrictive airspace, leading to the brief lockdown.

The airspace around Washington is more restricted than anywhere else in the country, according to the FAA, as "rules put in place after the 9/11 attacks establish 'national defense airspace' over the area and limit aircraft operations to those with an FAA and Transportation Security Administration authorization."

"Senior officials across the interagency are monitoring the situation on a national event conference call. NORAD aircraft are on site and responding. Plane is not considered hostile at this time," Pentagon spokesman Lt. Col. Chris Mitchell said during the early stages of the event.

But hours after the all clear was given, a defense official told CNN that a final determination had not yet been made as to what exactly caused the event.

There are currently three possible causes being analyzed, a US defense official confirmed to CNN: Birds, an atmospheric anomaly or a drone.

A US Capitol Police source also said it is "still not known" what happened other than there was "a big slow-moving blob of something" on radar that caused concern the object could be a drone.

US Coast Guard helicopters that arrived to intercept found no threat requiring further action, prompting law enforcement to search on the ground for a possible drone, the defense official said.

A White House official also told CNN that the lockdown was in response to a possible drone.

But two Capitol Police sources told CNN that the flying object may have just been a flock of birds, given how slowly it was moving and how it appeared on radar, then dissipated.

That theory has only been bolstered by the fact that military jets and helicopters scrambled in response reported that they saw nothing in the sky, according to a defense official.

A US official told CNN that the Federal Aviation Administration also did not see any aircraft on its radar.

However, air traffic control audio reviewed by CNN showed that the responding military aircraft, operated by a pilot going by the call sign "Blackjack," did report seeing a flock of birds while in the air.

Pilot: "And we, uh, almost just hit a flock of birds here at about one thousand three hundred."

Control: "Blackjack, you see the direction they're going?"

"A trained radar operator should be able to differentiate between a flock of birds and an aircraft, but this mistake is actually a fairly common one," according to retired Air Force Col. Cedric Leighton.

"How the flock of birds appears on a radar screen can be very similar to the radar 'look' of a small aircraft. This happens sometimes with older radar systems," he added.

Tuesday's event highlights the need for radar images to be "enhanced by other sources of information that can either confirm or call into question the radar operator's -- or air traffic controller's -- interpretation of those blips on his or her screen," Leighton added.

The Capitol Police source said the US Capitol went to "Aircon yellow" at 8:27 a.m. when the object was first identified. AIRCON is the alert status triggered when an aircraft enters the restricted airspace in Washington without authorization.

It took 11 minutes before the object was in the range that caused the alert at the Capitol to go to aircon orange, indicating it was slow moving.

US Capitol Police spokeswoman Eva Malecki said on Tuesday that "access to Capitol Complex buildings was restricted for a short time" out of an "abundance of caution" and that the situation was cleared about 45 minutes after the report of a possible aircraft in restricted space.