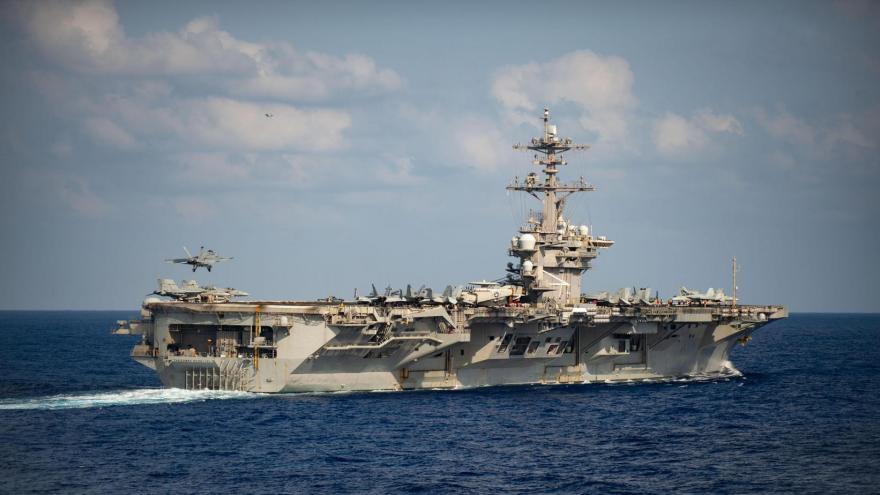 The coronavirus has returned to the USS Theodore Roosevelt, the same aircraft carrier that experienced a major outbreak earlier this year.

(CNN) -- The coronavirus has returned to the USS Theodore Roosevelt, the same aircraft carrier that experienced a major outbreak earlier this year, the handling of which caused the ship's captain to be fired and led to the resignation of the acting Navy secretary.

"The Sailors self-reported after experiencing symptoms, received immediate medical treatment, and were transported off the ship for isolation. Contact tracing aboard the ship is complete," the statement added.

The USS Theodore Roosevelt returned to sea in May after spending weeks in port in Guam following a major coronavirus outbreak on board in March.

More than 1,000 of the ship's nearly 4,900-member crew tested positive for Covid-19 following the spring outbreak. After evacuating some 4,000 sailors from the ship to Guam, the Navy had been returning sailors following a period of quarantine and isolation in the hopes of getting the aircraft carrier to sea as soon as possible.

Even though more than 600 hundred sailors were still in isolation, the ship was able to go to sea as it had enough healthy crew members to run essential functions on board.

The US Centers for Disease Control and Prevention collaborated with the US Navy on an investigation into the spring outbreak, finding that nearly 60% of sailors in the study who had antibodies had neutralizing ones -- "a promising indicator of at least short-term immunity," the researchers wrote.

The outbreak aboard the aircraft carrier also triggered a chain of events that led to the firing of the ship's commanding officer, and the resignation of the acting Navy secretary.

In April, the Navy announced that it was launching a broader inquiry into the circumstances surrounding the outbreak, effectively delaying its initial recommendation that the ship's commanding officer be reinstated. The announcement came days after Secretary of Defense Mark Esper declined to immediately endorse the Navy's original investigation into the issue, which included a recommendation to reinstate Capt. Brett Crozier.

Crozier was ultimately fired for what then-acting Navy Secretary Thomas Modly said was poor judgment for too widely disseminating a warning among Navy officials about the spread of the virus aboard his vessel, a warning that eventually made its way into the press. Modly resigned days later over his handling of the incident, actions which included a $240,000 trip to Guam where he slammed Crozier and admonished sailors for giving Crozier a rousing send off in public remarks to the crew.