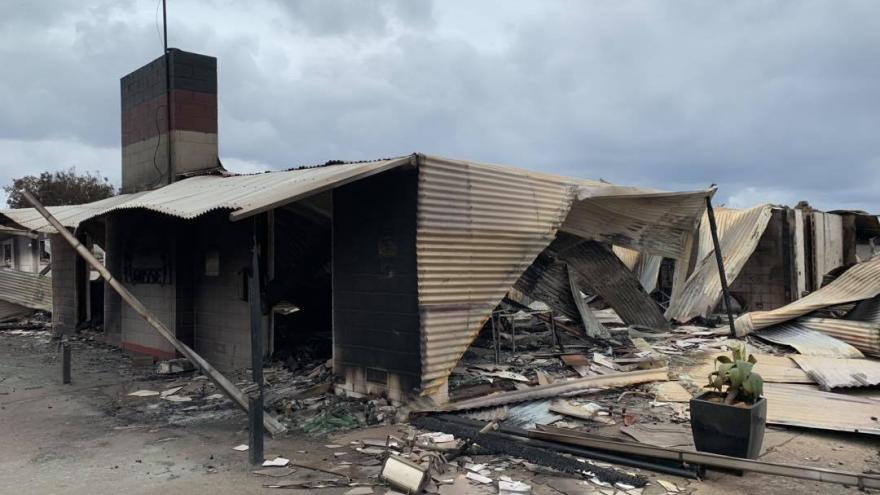 (CNN) -- The Australian federal government department responsible for managing emergencies shut its Canberra office due to poor air quality on Monday as the nation's capital choked on smoke from deadly bushfires.

On Monday, Canberra had a rating over 340 on the Air Quality Index -- higher than Beijing's 170. Australia has been ravaged by some of the worst wildfires seen in decades, with the massive blazes destroying homes, devastating wildlife, turning skies blood red and leaving a total of 24 people dead nationwide.

The Department of Home Affairs told non-essential staff to stay away from its Canberra headquarters, while the Department of Health told staff not to work out of one of its locations. Child care services in the city were also shut.

YWCA Canberra -- which operates a number of child care centers -- said that like many Canberra organizations, it had opted to close all of its children's services in the Australian Capital Territory and the rural New South Wales town of Murrumbateman on Monday due to "hazardous smoke conditions."

"This is to ensure the health and well-being of our staff and the children in our services," YWCA Canberra said in a statement on its Facebook page.

Canberra's National Gallery of Australia was also closed on Monday due to the smoke. "Closing our doors allows us to mitigate any risk to the public, staff and works of art on display," a statement on the gallery's website said.

Elsewhere in Australia on Monday, cooler weather and rain gave firefighters some relief. Shane Fitzsimmons, commissioner of the New South Wales Rural Fire Service (NSW RFS), said Monday that the conditions were a "welcome reprieve" -- but it wasn't putting out the fires.

"It's a psychological relief if nothing else," he said, noting that the rains weren't helping with back burning, a method of controlled burning that helps limit the spread of blazes.

The weather gave firefighters a chance to "take a breath" as they prepared for more emergencies later in the week, Victoria fires incident controller Andy Gillham said, according to national broadcaster ABC.

"We've seen drought conditions so the ground is very hard. If we get a lot of rain in a short period of time, it'll sit on the surface and run away," he said.

There are 136 active blazes in NSW alone, including 69 that are un-contained, the NSW RFS said in a tweet early Monday. In Victoria state, there are still 31 active fires and more than 1.1 million hectares (4,247 square miles) of land has been burned, the Country Fire Authority said in a tweet.

On Sunday, Prime Minister Scott Morrison cautioned that for some states, the most difficult fire seasons could be later in January and February. "The crisis is not over," he said. "There are months to go."

On Monday, Morrison announced that he would establish a 2 billion Australian dollar ($1.39 billion) National Bushfire Recovery Agency to help people hit by the "unprecedented bushfires" get the support they needed.

"It's a long road ahead and we will be with these communities every step of the way as they rebuild," he said.

The funds will be used to help "get communities back on their feet" by rebuilding roads, mental health support, and helping restore the local environment, Treasurer Josh Frydenberg said.

On Monday, the NSW police force said it had taken legal action against 183 people for bushfire-related offences since last November, including 24 who have been charged over allegedly deliberately-lit fires.

Morrison has been criticized for taking a vacation to Hawaii during the fires. But on Sunday, he said the government's response was the most significant and comprehensive ever to a natural disaster.

In a news release on Sunday, the Australia Defense Force said it was significantly increasing its fire support and had called up 3,000 army reservists and others with specialist capabilities.

As of Monday, HMAS Adelaide -- the biggest vessel in the Royal Australian Navy's fleet -- was moored off the coast near Eden, a seaside town in NSW that was affected by fires over the weekend. The ship has space for up to 5,000 evacuees.

Over the weekend, thick smoke hung low over Eden, blocking out the sun and casting an ominous orange glow.

On Sunday, police went door to door, boat to boat, telling people that it wasn't safe to stay. Some agreed to go, but others decided to stay put on informal evacuation centers -- a whale-watching tour boat and two tugboats moored at the wharf.

On Monday, the red glow was gone and some people started returning to their homes.

Louise Warren said she had lived in Eden all her life and was accustomed to annual fires, but she had never seen anything like this.

On Sunday, Warren, her husband and two children fled to the family's fishing trawler as the sky turned orange, then red, then black. "I just want everything back to normal," she said.

Kerrie Chester spent Saturday night on one of the tugs with up to 50 people, many children and elderly people, as well as the families' dogs. "I haven't slept all night," Chester said Sunday. She spent the night outside on the wharf, watching to see if the fire leaped across the bay.

"I think it was the not knowing, because you couldn't see it across the bay," she said.