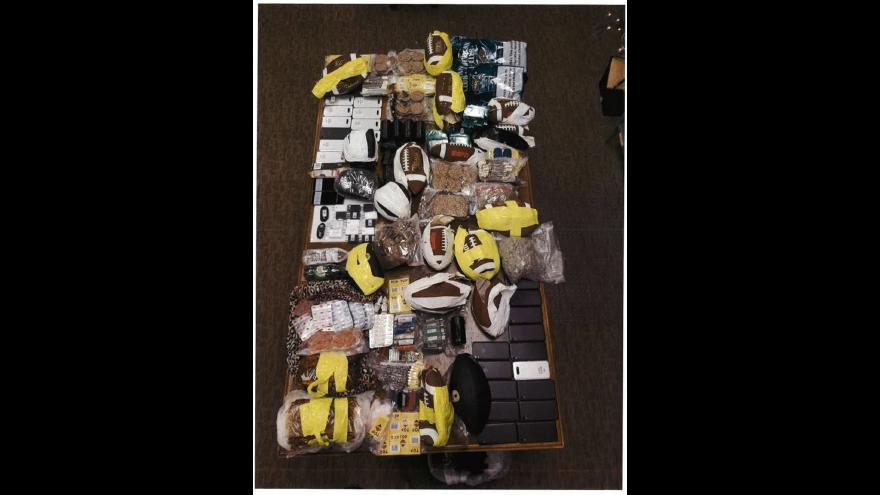 Among the items seized were marijuana, tobacco, cellphones and chargers, cigars, over-the-counter cold medications, snuff, cigarettes and lighters, a scale, a head scarf and chicken wings.

(CNN) -- Smugglers managed to throw a hefty haul of contraband items -- including 20 pounds of tobacco and seven pounds of barbecued chicken -- over the fence of a Mississippi prison. They may have gotten away with it, if it weren't for the prison's security technology.

Officials at the South Mississippi Correctional Institution in Leakesville intercepted more than 25 packages containing a number of items including four pounds of marijuana, 38 cellphones, chargers and earbuds and cold medication, plus the chicken and tobacco. Some of the items were sewn into footballs so they could be easily thrown over the 18-foot-tall fence surrounding the prison, but new sensing technology alerted guards to the drop, according to a statement released by the Mississippi Department of Corrections.

The unidentified smugglers attempted to throw the packages across a remote section of the prison's grounds, but officers were immediately alerted by the sensors and rushed to the scene, arriving in time to intercept the items and see their vehicle drive away. Authorities are searching for the suspects.

The prison has struggled to contain violent gang activities within its walls, and the MDOC says items like these can be dangerous for the inmates' safety.

"We are making Mississippi prisons safer for inmates and Corrections officers by stopping the flow of contraband," MDOC Commissioner Burl Cain said. "Gang leaders use contraband as a way to control other inmates ... Now we're installing and using the latest security systems, drones overhead, and cameras and scanners everywhere."

Prisoners found to be connected to the incident will lose eligibility for early release, according to the MDOC.