Snow blankets the South, moves into Northeast this weekend 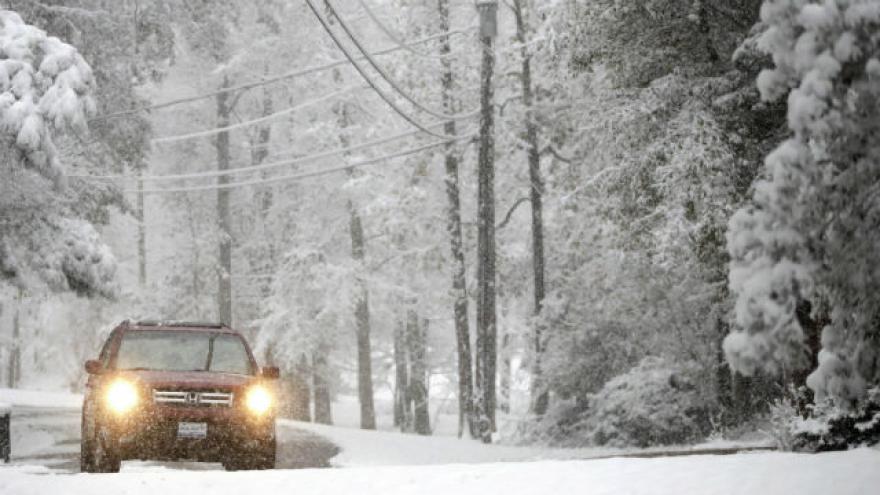 (CNN) -- A winter storm that blanketed parts of the Southeast with snow is sweeping northward and is expected to hit New England on Saturday.

The storm is expected to drop 6 to 8 inches of snow on Boston and Providence, Rhode Island, starting early Saturday and running through Sunday, the National Weather Service said. Windy weather, but not much accumulated snow, is predicted for Cape Cod.

The Massachusetts Department of Transportation said on Twitter that it planned to pretreat roads before the snow hit on Saturday.

Philadelphia should get about about 3-5 inches of snow, Washington, D.C. 2-4 inches, and New York and New Jersey 3-6 inches, the NWS said.

Winter weather advisories were issued for more than 75 million people in cities across the upper South and Northeast.

Meanwhile, the Southeast was already dealing with some of the heaviest snowfall in decades, starting Thursday night in South Texas, which rarely gets snow.

A scene that looked like the North Pole played out in Folsom, Louisiana, where Fallow and Sika deer frolicked in the snow at the Global Wildlife Center, which says it's the largest free-roaming wildlife preserve of its kind in the United States.

In Atlanta, snowball fights broke out as about an inch or so of snow fell on the city -- enough to create backups on the highways and to cause most school systems to close early.

The weather service predicted 1 to 3 inches could fall Friday night and a little more on Saturday. Up to 4 inches of snow fell in areas north of Atlanta.

Georgia's electric membership cooperatives reported Friday night that about 52,000 customers were without power, mainly in the north and western parts of the state.

The city of Atlanta and DeKalb County announced emergency warming shelters would be opened to ensure residents had a safe place to stay warm. Delta Air Lines canceled about 625 flights on Friday out of Atlanta Hartsfield-Jackson International Airport, the airline said on Twitter.

Five inches of snow had fallen by mid-afternoon in Birmingham, Alabama, causing havoc on the highways and putting thousands of people in the dark.

About 10,000 customers in the Birmingham area were without power Friday night, Alabama Power said in a tweet, along with 22,000 customers in eastern counties. A winter storm warning was in effect through midnight Friday.

CNN affiliate WLBT in Jackson, Mississippi, reported 4.9 inches of snow had fallen by mid-morning at Jackson-Medgar Wiley Evers International Airport, making it the largest snowfall since January 1982. The National Weather Service said 3-6 inches was expected in the Jackson area.

In the Midwest, cold air moving over relatively warm lakes was expected to create moderate to heavy snowfall in the Great Lakes region over the weekend.

The weather service said the heaviest accumulations were predicted for portions of the Michigan Upper Peninsula, and along the eastern shore of Lake Michigan