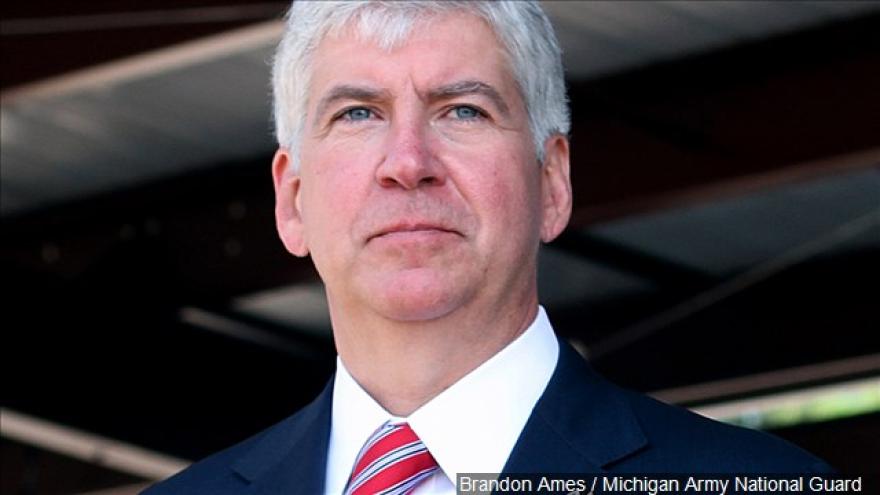 LANSING, Mich. (AP) — Gov. Rick Snyder on Thursday signed a bill making it a crime to cyberbully and vetoed ones that would have amended Michigan law to let parents voluntarily surrender a newborn inside a device rather than hand the infant to a police, fire or hospital employee.

The Republican governor also OK'd legislation to let Michigan businesses count out-of-state workers for the purposes of qualifying for state economic development incentives. He rejected a measure that he said would have increased the number of digital billboards.

All told, the term-limited Snyder — who leaves office next week — signed 48 bills and vetoed 11, bringing to 156 the number of measures he has approved in the hectic lame-duck period after the election. He has vetoed 15 bills.

The new cyberbullying law makes it a misdemeanor to post a message or statement on the internet — or any other medium designed to convey information to other people — that expresses an intention to threaten and commit violence against another person. Continued harassment and intimidation would be a felony if it causes serious injury or death.

"Cyberbullying can cause just as much trauma as traditional bullying so it's important that it be consider a crime," Snyder said in a statement.

The Safe Delivery of Newborns Law, enacted in 2000, lets parents surrender a newborn who is no more than 72 hours old by leaving the baby with a uniformed police, fire or hospital worker. It has led to 232 infants being surrendered safely, all but seven at hospitals.

The bills — approved on bipartisan votes in the House and Senate and backed by groups such as Right to Life of Michigan and the Michigan Catholic Conference — would have extended the 72-hour window to 30 days and allowed for surrendering the baby in a "safety device" installed at a police station, fire department or hospital. Within 30 seconds of a newborn being placed in the box, the device would have to trigger a 911 call and send a notification inside the facility. Such padded, climate-controlled boxes have been installed at some locations in Indiana.

In a letter to lawmakers, Snyder said the law has been an important and valuable policy to ensure unwanted newborns are not abandoned or harmed. But he wrote that it would not be appropriate to let parents surrender an infant by "simply depositing the baby into a device, rather than physically handing the baby" over. His veto was cheered by fire chiefs and health advocates.

"These bills sought to solve an unsubstantiated problem by substituting a metal box for the human-to-human contact that currently guarantees safe care for the infant and allows a welfare check on the surrendering individual while preserving their anonymity," Amy Zaagman, executive director of the Michigan Council for Maternal and Child Health, said in a statement.

The change to the state's business incentives allows a company with out-of-state employees to qualify as long as they account for no more than 25 percent of their workforce. It narrowly cleared the GOP-led Legislature, with Democrats and some Republicans in opposition.

Supporters have said the change will help more businesses expand or locate in Michigan, particularly in counties where people cross the border to work. Critics have said taxpayer support should not go to companies that employ out-of-state workers.

Snyder on Thursday also enacted a bill to authorize midlevel providers known as dental therapists to work in the state if they are licensed and have an agreement with a supervising dentist. Backers said the move will help ensure routine treatment for more patients in underserved populations, including in rural areas.

"Limited access to adequate dental health care comes with a hefty price tag — often in the form of missed days at school or work and larger dental problems that could have been avoided with routine care," Amy Zaagman, executive director of the Michigan Council for Maternal and Child Health, said in a statement. "We look forward to seeing dental therapists help our safety net settings and forward-thinking dentists provide access to care for many populations in Michigan currently underserved because of where they live or the type of insurance card they carry."

Other laws signed Thursday restrict municipalities from imposing occupational licensing requirements unless they already are doing so.