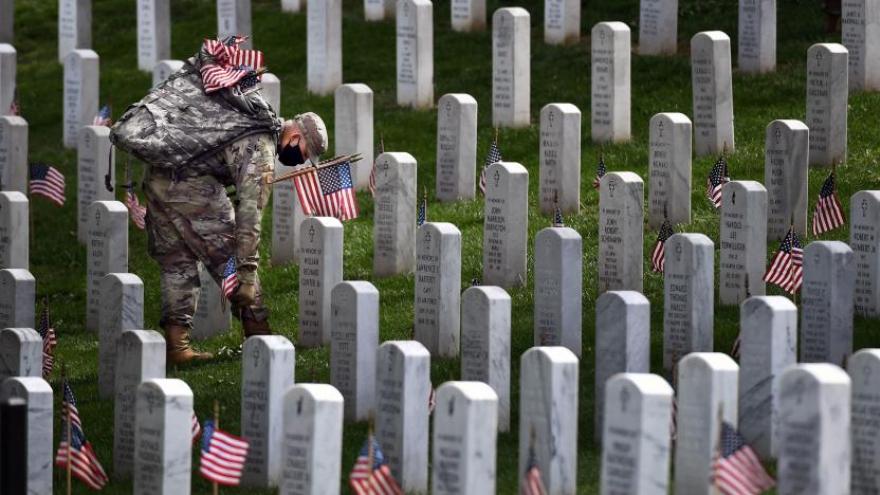 A member of the military places a flag near a headstone at Arlington National Cemetery in advance for Memorial Day on Thursday May 21, 2020 in Arlington, VA.

(CNN) -- As the nation observes Memorial Day in the midst of a global pandemic, the hallowed grounds at Arlington National Cemetery are also adapting to the situation.

Masks, social distancing and other safety precautions have all become a part of the solemn rituals and pageantry at the Tomb of the Unknown Soldier as well as the near daily funerals that still take place in the cemetery.

The new reality: Only 10 family or friends are allowed graveside. As few troops as possible perform funeral honors. Distance is kept, and masks are worn.

At a recent funeral for decorated World War II veteran Command Sgt. Major Robert Belch, members of the Army's Third Infantry Regiment, the unit known as the "Old Guard" that carries out funerals at Arlington, remained masked the entire time.

The flag that covered Belch's casket was not handed to the next of kin, but was gently laid on a table next to the grave to avoid physical contact, as is the case for all other funerals in the current environment.

Even the ceremonial rifle platoon on hand to fire off their salute at the end of the service wore masks while the entire funeral party stayed physically separated from one another.

Capt. Doug Rohde, who returned from a deployment to Iraq last October, is now the commander of Bravo company with the Old Guard. His unit still trains for and works to ensure it delivers the same dignity and respect at every funeral despite the changes.

"It means a lot to me that we can still be there for the families even though, you know, we are dealing with a lot as a country right now and we are able to stay constant and maintain, you know, the level of professionalism and be there for those families as they lay their loved ones to rest," he said.

On some occasions, Rohde's unit even carries out funerals alone because the family of the fallen was unable to travel to Arlington due to safety concerns.

"Our heart goes out to them for not being able to be there with their loved one as they are laid to rest, but I hope they take comfort knowing the Old Guard was there, you know, doing the funeral the exact same way to the same level of professionalism with dignity and honor for their loved one," Rohde said.

Covid-19 has still managed to idle some of the more iconic scenes at Arlington.

The Army's elite Caisson platoon, which operates the horse-drawn wagons that carry the caskets of those killed on the battlefield, as well as elderly veterans and presidents of the United States, has seen its role in funerals halted since the middle of March.

Before coronavirus, the unit would be on duty at 4:30 every morning they were scheduled to participate in a funeral in order to wash all seven horses that were part of that day's ceremony. The unit takes part in approximately 40 funerals during an average week.

The hours these days are shorter but the unit is still carrying out "mock missions" and regularly shining more than 300 pieces of brass to be ready once the restrictions lift.

"We want to be out there, we want to be doing our part, we want to be pulling our weight, and I'm sure the horses do as well," Specialist Joseph Gorgas said while still tending to the horses in their stables at Joint Base Meyer-Henderson Hall in Virginia.

But nearby, up the hill at the Tomb of the Unknown soldier, the soldiers known for executing their razor sharp walk in front of the tomb wear masks as they get dressed and ready for their shift, constantly sanitizing their quarters near the tomb.

Visitors are currently not allowed at the tomb, but there is no easing of a tradition where soldiers have kept guard 24 hours a day, seven days a week since July 1937 regardless of weather, war or pandemic.

And for the soldiers carrying out the mission, the symbolism of keeping watch over the remains of troops whose identities are unknown is a tradition that must continue.

"They had goals and they had ambitions and they weren't able to fulfill that," Sgt. First Class Chelsea Porterfield, who is the Sergeant of The Guard, said of the men who lie in the tomb. "To maintain and make sure that we can provide the living symbol, if you will, for America and everyone to see what we are doing is the best way to pay tribute to all of the unknowns."

For Sgt. Jacob Hammond, who is also a part of the unit, the frequent temperature checks and other measures that have become a part of daily life at Arlington are just a formality they must adhere to.

"The mission will continue no matter what, and it's the soldiers that continue the mission, so just ensuring that they are taken care of is the best way to ensure the mission is continued," he said.