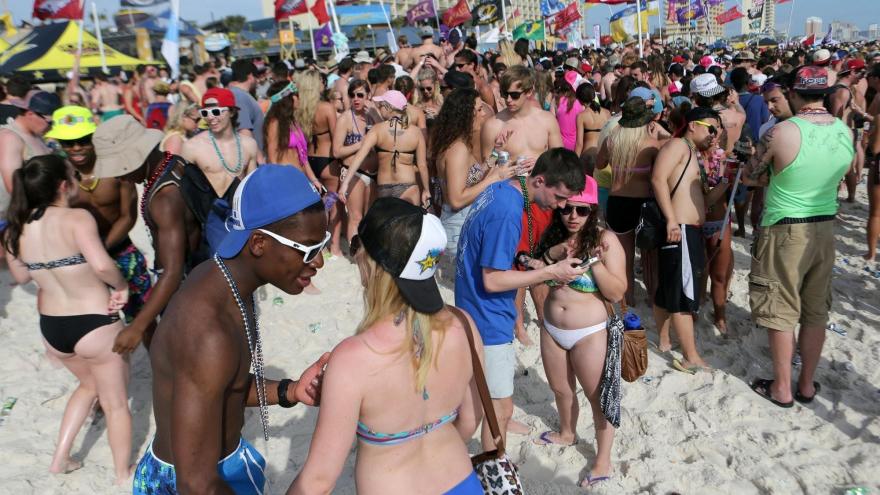 **This image is for use with this specific article only** Partyers during spring break 2015 in Panama City Beach, Florida. The city has since banned drinking on the beach.

(CNN) -- Ah, spring break -- the time of the year when tens of thousands of college kids head to the beach for fun, sun and shenanigans. But increasingly, these warm-weather locales are giving young partyers a chilly reception.

Fed up with years of unruly antics and disturbing headlines, spring break destinations have started cracking down -- hard.

Miami Beach has stationed cops in DJ booths. Other cities have enforced beach booze bans. And some places have gotten out of the spring break business altogether.

Zero tolerance, it seems, is the new normal.

"We are not going to prostitute ourselves for a buck," Tony Kennon, mayor of Orange Beach, Alabama, told CNN.

Miami Beach is warning students with a catchy but dire slogan

In Miami Beach, where hordes of rowdy youngsters have become a liability to one of the world's top tourist destinations, police this year launched a $33,000 digital ad campaign and sent letters to 300 fraternities and sororities.

Its marketing campaign centers around a catchy slogan: "Come on vacation. Don't leave on probation."

It lays out the consequences of drinking in public, riding on top of vehicles, or smoking marijuana: arrest.

Even so, spring break in Miami Beach kicked off two weeks ago and it's been pretty wild. A recent video showed a man punching a woman in the face, while locals reported women running naked in the streets and violent beach brawls. Police said 97 people were arrested this past weekend alone.

Miami Beach's diverse economy is not reliant on spring breakers, so it can afford to take a hard-line approach. The city has banned alcohol on the beach as well as loudspeakers and inflatables.

"There is an increased police presence for a five-week, high-impact period," Miami police spokesman Ernesto Rodriguez told CNN. "Our message is to be responsible and don't act up."

To avoid being total buzzkills, the Miami cops have had to get creative. So they turned an old lifeguard tower into a DJ booth which blasts summer anthems to beach revelers.

"Two officers who enjoy DJing will be in there. They can also monitor behavior on the beach. The officers are out there engaging with community and doing conga lines," said Rodriguez.

The Miami Beach business community appears to be in sync with law enforcement.

"The message is that there are rules," says Ceci Velasco, a Chamber of Commerce board member. "There has got to be a balance. Other guests have to be a consideration too," she added.

Velasco notes that business so far has not been impacted by strict policing of the students. Miami Beach is such a big draw that college kids keep coming back, no matter the welcome. This is not the case elsewhere.

Panama City Beach is out of the spring break business

Some destinations have pulled up the welcome mat to spring break partyers.

"We don't have spring break anymore. We are out of the spring break business," Panama City Beach Mayor Mike Thomas told CNN. "It shined a bad a light on our community."

It became family-friendly again. Thomas banned alcohol from the beach, shut bars at 2 am and restricted scooter rentals. Word of the crackdown soon spread on social media and #RIPPCB began trending during the next spring break season.

The Florida Panhandle city's zero-tolerance policy has had the desired calming effect as the raucous college crowd has thinned out.

Some businesses on the beach are taking a big hit, though.

"We have seen a 60% drop in business," said JR Davenport, who runs Hammerhead Fred's bar. "We are losing money to bring people in."

"It is a changed world that we live in," said Bishop, who added he has worked on the beach for 49 years and never seen it like this. "It is safer and quieter."

An Alabama city is stressing its family-friendly status

Orange Beach in nearby Alabama took up much of this slack.

After PCB shut its spring break down, this family-friendly locale was besieged by rowdy college students, forcing Mayor Tony Kennon to enact a similarly strict approach to law enforcement. An incredible 800 arrests were made in 2016, but that fell to 200 last year.

"There are no mulligans, no do-overs," Kennon said. "If you break the law you are going to jail."

The mayor says he has full support from the local business community as he pushes to retain the city's wholesome atmosphere. "The party crowd is going somewhere else," he told CNN. "This is not an MTV-type spring break."

Such stern approaches are leading students to seek more permissive destinations. It is no surprise that the recently revived "MTV Spring Break" series is shooting in Cancún, Mexico, rather than in the US.

South Padre Island in Texas, one of the hottest party destinations this year, is taking a novel approach.

The resort city has actively sought spring breakers and not imposed draconian rules. Instead, it uses technology to keep revelers in line.

Police have installed cameras on the beach and are flying drones to monitoring traffic and crowds. They also are employing license plate readers and cellphone heat maps and are monitoring social media to spot illegal parties. In addition, the city has tripled its number of police officers this season.

"We have embraced the trend of newer technologies," Police Chief Randy Smith told CNN. "We open ourselves up and embrace the spring break period. It is chaos, yes, but planned chaos is better than unorganized chaos."

So far the policy appears to have been great for business.

"There is a lot of competition for those college kids," said Clayton Brashear, owner of Clayton's Beach Bar in South Padre Island. "We need that business. It means a lot of jobs."