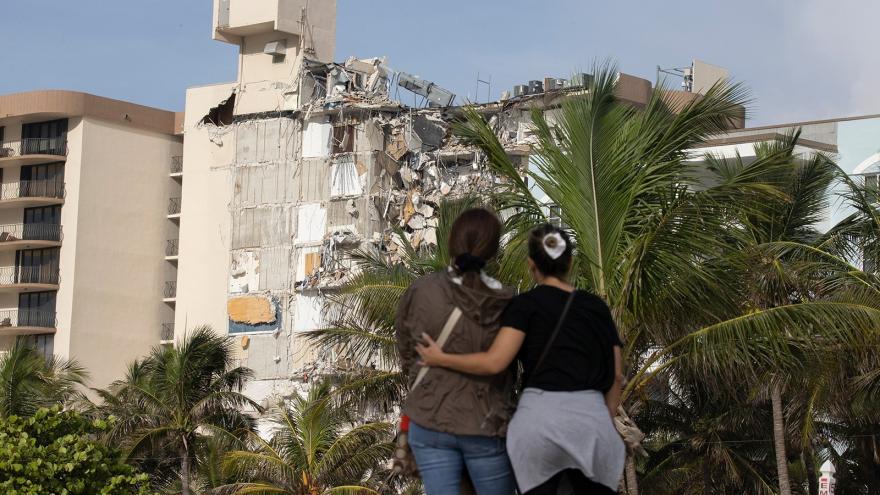 (CNN) -- Some family members of the people who remain unaccounted for following a residential building collapse in South Florida have grown impatient as officials urge patience during the slow, painstaking rescue efforts that are likely to continue for days.

A mother who said she is worried about her 26-year-old daughter who is missing after the partial building collapse in Surfside, Florida, desperately urged officials on Saturday to do more.

"I'm a mother. I don't know the best way to go about this. ... Imagine if your children were in there," the mother told state and local officials as they met with the families of those missing following the collapse.

"I know you're doing everything you can, but it's not enough," she said in an emotional video posted to Instagram Saturday.

The families of the dozens still unaccounted for following Thursday's partial collapse of a condo building a few miles north of Miami Beach are growing impatient, desperate for faster results from the search and rescue crews who have been digging through the rubble around the clock.

Sarina Patel, who said she has three family members missing after the collapse, told CNN she's thankful for the search and rescue efforts but her family is "antsy."

"We are hanging in there, trying to be strong. Praying for a miracle but starting to get antsy with the lack of updates today," she said Saturday.

"We were hoping for some more news by now as the crew works through the rubble. However, we are forever grateful for their tireless efforts," Patel said.

Patel's uncle, his wife and their daughter were unaccounted for as of Saturday.

The death toll rose to five Saturday, up from four confirmed deaths on Friday.

The victims were identified as Antonio Lozano, 83, Gladys Lozano, 79, and Manuel LaFont, 54, the Miami-Dade Police Department said in a news release Saturday night.

A fifth victim has not yet been identified.

There are now 130 people accounted for and 156 unaccounted for, Miami-Dade County Mayor Daniella Levine Cava said Saturday. Officials have not determined a cause of the collapse.

About 55 of the 136 units of Champlain Towers South collapsed around 1:30 a.m. Thursday, leaving huge piles of rubble on the ground and materials dangling from what remained of the structure, officials said.

Surfside Mayor Charles Burkett assured frustrated families search efforts will not stop until everyone is pulled from the rubble.

Structural report showed the building had some 'cracking'

Nearly three years ago, an engineer pointed out concerns about structural damage to the concrete slab below the building's pool deck and "cracking and spalling" located in the parking garage, according to documents.

A structural field survey report from October 2018 was included in a series of public documents published overnight on the Surfside town website. The New York Times was first to report about the field survey's findings

The waterproofing below the pool deck and entrance drive was failing and causing "major structural damage," according to the structural field survey.

"The waterproofing below the pool deck and Entrance Drive as well as all of the planter waterproofing is beyond its useful life and therefore must all be completely removed and replaced," the report states

The report said the waterproofing was laid on a flat structure rather than a sloped concrete slab that would have allowed the water to drain. That resulted in water sitting on the waterproofing until it evaporated, in what the report identified as a "major error."

"The replacement of the existing deck waterproofing will be extremely expensive ... be disruptive and create a major disturbance to the occupants of this condominium building," the reported noted.

The report, the goal of which was to "understand and document the extent of structural issues," detailed signs of "distress/fatigue" in the parking garage.

"Abundant cracking and spalling of various degrees was observed in the concrete columns, beams and walls. ... Though some of this damage is minor, most of the concrete deterioration needs to be repaired in a timely fashion," according to the report.

The report, which was completed by Frank Morabito of Morabito Consultants, didn't indicate whether the structure was at risk of collapse.

Burkett told CNN that it's still "unclear what steps the building was taking to address those cracks" mentioned in the report.

"We are going to get to the bottom of what happened at this particular building," Miami-Dade Mayor Daniella Levine Cava said.

Abieyuwa Aghayere, a professor of structural engineering at Drexel University who reviewed the report, said its findings were alarming and should have spurred further review of the building's integrity.

"Nothing like this was foreseeable," Direktor said. "At least it wasn't seen by the engineers who were looking at the building from a structural perspective."

CNN reached out to Direktor on Saturday for comment.

Voluntary evacuation for other Champlain towers

Surfside building officials did a cursory review of the structure at Champlain Towers North and East and "didn't find anything that was out of order," Burkett said Saturday.

"So that's reassuring, but that is not a deep dive," he added. "We are going to do a very deep dive into why this building fell down. And I imagine that is going to end up being a very sort of comprehensive project."

If residents living in Champlain Towers North and East want to evacuate, they can, Burkett said.

The mayor noted they are working with federal officials on relocation options.