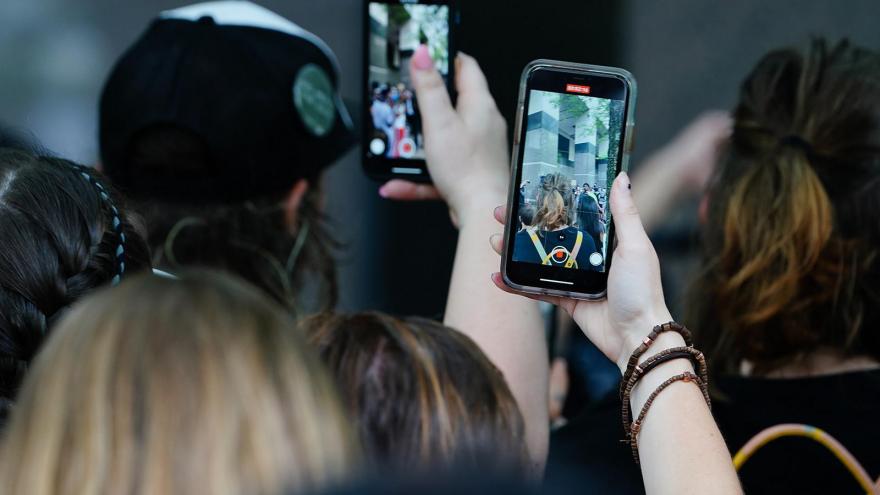 People use their cell phones to record a speaker during a protest against police brutality on June 6, in Atlanta.

(CNN) -- Kris Shettsel joined thousands of others earlier this month, carrying a sign in solidarity while marching through the streets of Downtown Los Angeles at a demonstration following the death of George Floyd.

Floyd, a 46-year-old black man, died at the hands of Minneapolis police in late May. When video of the incident surfaced, it sparked protests across the globe with people taking to the streets to demand justice for Floyd and an end to police brutality.

At one point during the June 4 protest, Shettsel handed her phone to a friend, walked to the crosswalk and held up her "Black Lives Matter" sign waiting for her friend to snap a picture.

The moment was also caught by another camera, however -- and video of Shettsel posing amid a demonstration quickly went viral and sparked backlash. After being posted on @influencersinthewild, a Twitter account dedicated to showing the lengths social media influencers will go to for content, it garnered more than 19 million views.

As protests continue, Shettsel and a handful of other social media influencers have found themselves being accused of using the unrest sweeping the country as a chance to create content.

Last week, Shettsel issued a formal apology on Instagram, saying she has the "utmost respect for the Black Lives Movement" and that she "may not have chosen the best avenue to spread the message."

But this sort of behavior -- from Shettsel and others -- has shocked the general public, as well as many in the influencer community. Some have described the actions of these select creators as "shameless."

"People feel that it's okay to use protest and other tragic situations as political theater as props because they don't have a sense of consequences or propriety. It's shameless," Roberto Blake, an influencer, entrepreneur and educator, told CNN over Twitter.

"Whether it's an Instagram model in the streets or our leaders abusing sacred symbols, it's distasteful and entitled. If they put that time into planning a shoot instead into becoming educated about the issues, they wouldn't even contemplate it."

'A lot of people do this kind of stuff'

Mike Metzler, a digital marketing manager, characterized the type of behavior exhibited by Shettsel and others as "influencer opportunism."

"When you're an influencer and 'making content' is your job, you can begin to view every experience and part of your life as a 'possible' piece of content," Metzler told CNN over Twitter. "This becomes a habit and a way of life for many influencers. But the truth is, not everything needs to be content, and there are certain situations where you really need to pause and read the room."

Last year, she wrote an article for The Atlantic about the backlash some influencers received after visiting Pripyat, Ukraine, the city left in ruin after the nuclear disaster at the Chernobyl power plant in 1986. The location spiked in popularity last summer due to the hit HBO miniseries "Chernobyl."

In a way, what influencers did at Chernobyl is similar to what they've been seen doing around the US over the past few weeks, Lorenz told CNN.

"Influencer culture is so pervasive now," Lorenz said in a phone interview. "Everyone is trying to capture their experiences and communicate their feelings about this very fraught subject and racism in general."

"This woman obviously missed the mark but a lot of people do this kind of stuff," Lorenz said, referring to Shettsel.

A notable example of another influencer turning the demonstrations into an excuse to promote themselves involved one of YouTube's biggest stars.

Earlier this month, Jake Paul was charged with criminal trespass and unlawful assembly after video showed him at a Scottsdale, Arizona, mall as it was being looted, police said.

The 23-year-old, who has 20.1 million followers on YouTube, was present during the looting and property destruction that happened at the city's Fashion Square mall on May 30, the Scottsdale Police Department said in a Facebook post.

Video taken by his photographer and posted by another user to Twitter appeared to show Paul outside the mall as people were attempting to break in.

Later, the footage appears to show him inside the mall along with others after it had closed. It is unclear whether Paul took anything, and he has not been charged with any theft or vandalism that occurred.

Paul, whose older brother Logan Paul is also a famous YouTube creator, said that he nor anyone else he was with was engaged in looting or vandalism, and that his group was tear gassed by police.

This isn't the first time Paul has faced controversy. He was booted from Disney Channel in 2017, and has since utilized his online popularity -- most notably from the former short-form video platform Vine -- to keep eyeballs on his content. He's been called out for his bad behavior many times, but continues to remain popular.

Some, like Blake, hope Paul's most recent public controversy will become a "teachable moment."

"My thought and hope is that this is a teachable moment for him as well as his audience and also his peers and that the right lessons are learned from it," Blake said, adding he doesn't know Paul personally. "But I have no interest in condemning him or canceling, and even I did it would just be a distraction for the more important and more relevant issues that need to be addressed."

How to leave 'influencer opportunism' behind

Even after the apology, Shettsel told CNN she feels she has ruined her reputation and career "because of a picture."

"The backlash has been defamatory toward me as a woman and a human being; they (are) calling out for my public rape, murder threats, public lynching over a picture," she said. "I can't wrap my head around this kind of backlash."

But some in the creator community are giving her the benefit of the doubt.

Gabrielle Epstein, an influencer with 2.3 million followers on Instagram, said she felt uncomfortable by Shettsel's post but understood Shettsel likely "had good intentions."

"I think the spotlight needs to be about the movement as a whole rather than the individual," Epstein told CNN. "We are all human, we all make mistakes, and in the era of social media have become frighteningly quick to judge and criticize others. The important thing is that we learn from those mistakes in order to do and be better."

Due to the nature of social media, it's easy for influencers to "become accustomed to posting things whether it be for 'likes' and validation without even thinking," beauty vlogger Nicol Concilio told CNN in an email interview.

These people should instead try to spread awareness and be a positive avenue for change, Concilio added.

Kenzie Brenna, another social media influencer who has almost 300,000 followers on Instagram, echoed that sentiment.

"My advice to influencers is to check yourselves, are you serving the collective good or are you serving yourself?" Brenna, who hosts a podcast called "Conversations with Kenzie," told CNN in an email interview.

"Do your morals extend beyond getting likes and attention? If not, change."