Some restaurants are using shower curtains, stained glass and lots of plants to keep diners safe 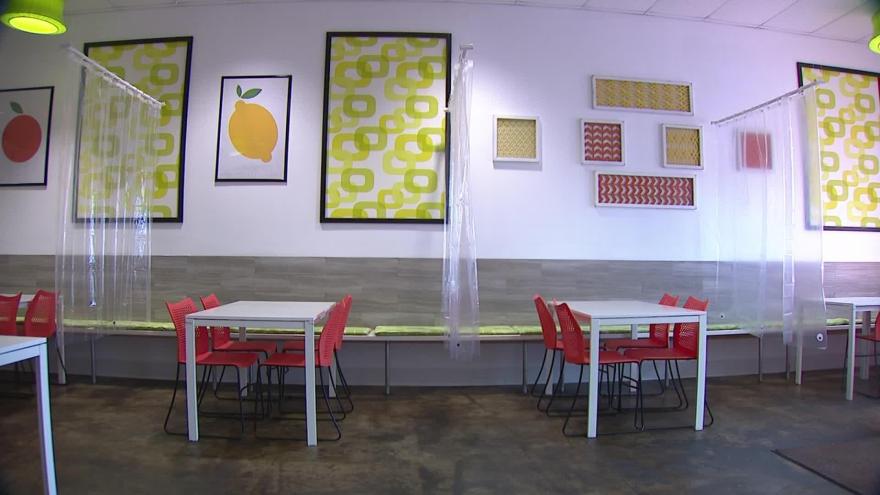 (CNN) -- A popular Northeast Ohio breakfast spot will look a little different when its able to welcome back customers after being closed for about two months because of the state's coronavirus restrictions.

Workers at Twisted Citrus in North Canton prepared for their May 21 reopening by installing clear shower curtains between each table to separate diners while they eat.

Under restaurant guidelines issued last week by Gov. Mike DeWine, tables must be at least six feet apart or be separated by a physical barrier.

"Six feet between tables would have limited us to maybe eight to 10 tables, which financially would not have made it worthwhile to open back up for us," Twisted Citrus co-owner Kim Shapiro told CNN.

That cut the restaurant's seating capacity from about 80 people to 55 customers, Shapiro said. They have room to safely add a few more seats if they're needed, but Shapiro said they wanted to be conservative at first.

They also rearranged the tables so parties were sitting back-to-back instead of being beside each other on the long communal bench that runs along one wall of the restaurant.

Twisted is among many restaurants around the country that are wrestling with how to protect their customers and staff, as states move to reopen their economies and lift stay-at-home orders that have been in place because of the coronavirus pandemic.

"I don't know if I'm going to open to a full house or to crickets. I don't really know what the appetite is for the customers who will come back to visit us," Shapiro said. "I figure its always it's always a good problem to have if we have to add tables than take them away."

Dining will be 'a lot more intimate'

Shapiro said she picked the shower curtains for Twisted because they'd be easy to disinfect between customers and could be run through their commercial dishwasher at the end of the day.

She also wanted customers to be able to see each other, since that's a big part of the dining experience.

They have two other restaurants with patios that can start offering outdoor dining on Friday, under the guidelines.

Being creative in redesigning a restaurant's layout has been key in adjusting to new guidelines, according to Atlanta-based architect Anita Summers.

"A lot of what we're doing is trying to come up with creative ideas without spending a ton of money on a whole new decor," said Summers, who is with The Johnson Studio at Cooper Carry, which specializes in restaurant designs

Her clients have looked at a lot of different kinds of barriers, including elegant stained glass and mirrors, which make the socially distanced space seem less empty.

"Our kind of go-to is plants. It's just an easy way to spread out your tables and chairs," she said. "Put plants in, it always adds life and it just feels healthy and and it's not just empty space between booths or between tables."

Summers doesn't think customers will be lined up five deep at a bar, anymore, while they wait to get their drinks.

"It's looking like places are going to be a lot more intimate," she said. "You might be a little more with the group you came with, rather than part of a big room full of people."

Some restaurants are considering major changes like upgrading their heating and air conditioning systems, installing automatic doors and even potentially having separate entrances and exits, Summers said -- so diners don't have to squeeze past each other.

Colored tiles could replace the strips of tape and stickers many restaurants are using to remind people to stand six feet apart.

In the future, Summers expects more restaurants to have open kitchens and sinks at wait stations, so diners can see that the staff are washing their hands regularly.

"It just adds one more level of trust and you just feel like you're being cared for," she said.

Each of his restaurants would have about a dozen of the dividers to create "a safe comfortable environment," he told CNN.

They've also gone into business selling the dividers to other restaurants, and Boccuzzi said there's been a lot of demand.

Boccuzzi said he's going to wait until the first week of June to welcome back dine-in customers at his restaurants, even though he they could open sooner.

"I am taking my time to do things properly and get organized," he said.

Even away from the US, restaurants are getting innovative.

A restaurant in Amsterdam has taken social distancing barriers to a whole new level, by seating parties at tables in cozy, outdoor greenhouses.