Some states want to give drivers a gas tax holiday. But that might not be a wise move. 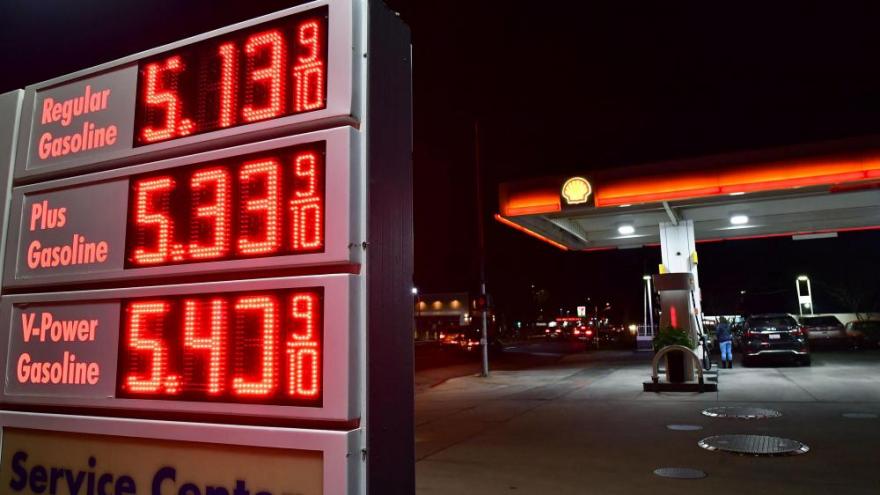 As Americans reel from skyrocketing gasoline prices, a growing number of states are looking to provide residents with a little relief by suspending their gas taxes. Gas prices reach over $5.00 a gallon in Los Angeles, California on February 25, 2022.

(CNN) -- As Americans reel from skyrocketing gasoline prices, a growing number of states are looking to provide residents with a little relief by suspending their gas taxes.

Nearly all states levy taxes or other fees on gasoline sales, on top of the federal gas tax of 18.4 cents a gallon. The revenue often goes to repair and expand transportation infrastructure.

Gas taxes have come under scrutiny as prices spike, fueled in part by Russia's invasion of Ukraine, which began last month. Nationwide, a gallon of regular gas cost an average of $4.32 as of Thursday, according to AAA. A month ago, the price was $3.48 a gallon.

Maryland residents may soon get a break at the gas station. Republican Gov. Larry Hogan said Thursday that the state's strong revenue estimates and record surplus will allow him and lawmakers to provide relief by lifting the gas tax of roughly 36 cents a gallon.

"At this time of global uncertainty, we are working on an emergency suspension of the gas tax to help with the pain at the pump," tweeted Hogan.

Georgia Gov. Brian Kemp, a Republican, said earlier this week that he plans to work with the General Assembly to suspend the state gasoline tax through May 31. The levy is roughly 29 cents a gallon. The goal is to "curb sky-high gas prices," he said in a statement.

"In these extraordinary times, every little bit helps, and we remain focused on keeping our people and our economy moving," Republican David Ralston, the speaker of Georgia's House, said in a statement.

In Illinois, Democratic Gov. J.B. Pritzker said in a news conference on Wednesday that the state can provide some relief to residents by alleviating the pressure of the gas tax, which is just over 39 cents a gallon. He has proposed delaying an automatic annual increase in the gas tax set to take place in July.

Meanwhile, governors or lawmakers in Arkansas, Maine, Michigan, New York, Pennsylvania and Virginia, among other states, support providing a temporary gas holiday or reducing rates. California Gov. Gavin Newsom, a Democrat, called Tuesday for a tax rebate to help residents cope with the highest gas prices in the nation.

Also this week, six Democratic governors wrote to congressional leaders urging them to lift the federal gas tax for the rest of the year. They said they supported legislation introduced last month by a bicameral group of Democratic lawmakers that would allow the federal Highway Trust Fund to remain whole by directing the Treasury Department to transfer general fund dollars to replace the lost gas tax revenue.

"Money saved at the pump translates into dollars back in consumers' pockets for groceries, child care, rent and more," wrote the governors of Colorado, Michigan, Minnesota, New Mexico, Pennsylvania and Wisconsin.

But suspending the state gas tax actually may not do much to help drivers, and it could hurt state budgets and delay road improvements, said Lucy Dadayan, senior research associate at the nonpartisan Tax Policy Center.

Gas stations may not necessarily reduce their prices if states lift their taxes, she said. Plus, though most state budgets are healthy at the moment, that can turn quickly -- particularly as the conflict in Ukraine and high inflation drag on.

Instead, states may want to provide more targeted assistance to lower-income residents, who have a harder time coping with skyrocketing gas prices.

"It's much, much more reasonable to give rebates to the lowest-income taxpayers," Dadayan said, noting that lifting the gas tax for everyone isn't fiscally fair. "But eliminating or temporarily suspending gas taxes is not a prudent tax policy."