Someone is breaking the wings of pelicans in California 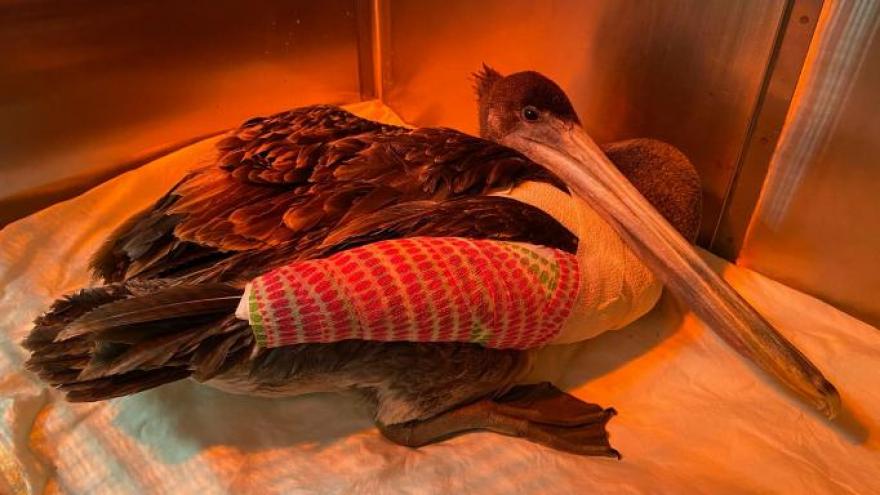 This brown pelican, pictured here after surgery, later died. It is one of the more than 30 brown pelicans severely injured in a string of attacks in California.

(CNN) -- Dozens of brown pelicans have been attacked and injured in California, with whoever is responsible snapping some of the birds' wings.

More than 30 injured brown pelicans have been found between San Clemente and Huntington Beach, Wetlands and Wildlife Care Center of Orange County said in a statement. Of those, 22 birds had compound fractures, where the ends of the broken bone stick out through the skin.

"These are very serious injuries that require emergency surgeries and long term care," veterinarian Elizabeth Wood said in a statement.

In a news conference on Wednesday, Wood explained that the center has not been able to save all the birds.

"(One pelican) went straight into emergency surgery to flush out all of the debris in the open wound," Wood said. "So bone was protruding through the skin, and the wing was actually twisted all the way around."

This type of orthopedic surgery can cost thousands per bird, the center said, and the group is now taking donations to help cover the costs.

The group is also requesting that people call a tip line at 888-334-2258 if they know anything about the attacks -- and is offering a $500 reward for information.

So far, the tip line has not received any calls, Patrick Foy, public information officer for the California Department of Fish and Wildlife, told CNN. But he said there have been reports of injured pelicans along the coastline since April of last year.

"No suspects, no motive and no evidence other than the injured pelicans," he said.

Still, he said, they are "quite certain" someone, rather than something, is behind the attacks.

Brown pelicans spend winters in central California, according to the National Wildlife Federation.

Though the birds are not endangered now, they were federally endangered in the 1970s and 1980s, the NCF said, due to pesticides in their food chain. They are still protected under the Migratory Bird Treaty Act, which prohibits the killing, capturing and selling of protected migratory bird species without authorization from the US Fish and Wildlife Service.