Songbirds sing so loudly at dawn because they're warming up, study finds 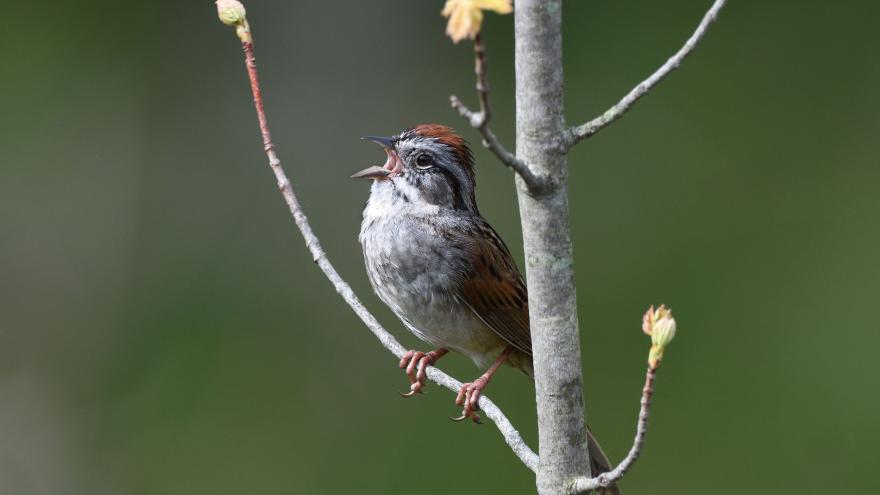 Researchers have found that when song sparrows chirp loudly outside your window in the wee hours of the morning, they're really just practicing. And like the best crooners, they sing better after they've had a chance to loosen their voice.

A team from Duke University tested this hypothesis by measuring the vocal performance of 11 swamp sparrows, examining the vocal deviation in more than 1,500 songs recorded by the birds.

What they found is that as the day goes on, the birds' vocal performance generally improved -- meaning they were able to produce more physically challenging songs. Still, males who produced a lot of songs had more variability in their vocal performance, which suggests that some birds might get tired when singing.

The study was published last month in the journal Animal Behavior.

As it turns out, vocal performance "has serious consequences for swamp sparrows," said Jason Dinh, a biology Ph.D. student at Duke and the study's lead author.

"Older and larger males tend to sing higher performance songs," he wrote in an email to CNN. "Furthermore, high performance songs are more attractive to females and more intimidating to rival males. By warming up and improving their vocal performance, birds might be able to better attract mates or fend off rivals later in the morning."

So, what does a challenging song for a songbird sound like?

Dinh wrote that for swamp sparrows, songs were physically challenging if they were trilled rapidly and hit a wide range of pitches. Those factors depend on how quickly a bird can move its beak and how wide it can open it, he added.

But though researchers have learned that the intense singing of songbirds at dawn is because they're warming up, they still don't know exactly why it makes their singing improve.

Warming up is helpful for people both when they sing and exercise because it increases the temperature of the muscles, Dinh explained. Warming up before singing can also help hydrate our vocal cords.

But still, Dinh said it's entirely possible that the case could be different in birds.

"It's difficult to make direct comparisons to warming up in birds because their sound-producing mechanisms are so different from ours," he wrote. "However, it's is possible that the general benefit of literally warming up the sound-producing muscles and tissues could apply to birds as well."