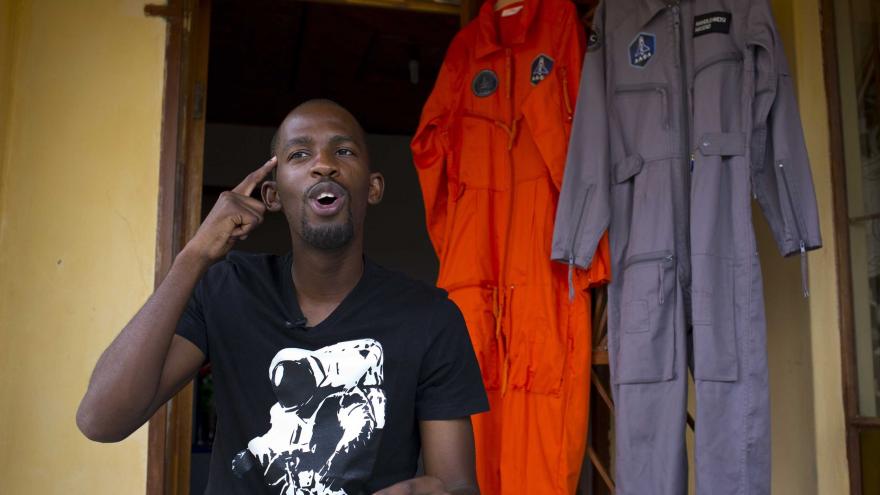 Mandla Maseko speaks to a journalist in front of two hanging NASA spacesuits on January 9, 2014, after landing a coveted seat to fly 103-kilometers (64 miles) into space. Source: AFP/Getty Images
By Stephanie Busari and Stephanie Halasz, CNN

(CNN) -- Mandla Maseko, the South African former DJ who won a chance to become the first black African in space has died in a motorbike crash, his family said in a statement.

Maseko, 30, beat one million other contenders to win a trip to space sponsored by the Axe Apollo Space Academy, which had yet to be scheduled by the time of his death.

"It hasn't really sunk in yet. I'm envious of myself, Maseko said at the time in a Guardian interview. "I'm not trying to make this a race thing but us blacks grew up dreaming to a certain stage. You dreamed of being a policeman or a lawyer but you knew you won't get as far as pilot or astronaut.

"Then I went to space camp and I thought, I can actually be an astronaut."

He went on to become a private pilot and was also a corporal with the South African National Defence Force, according to this Twitter bio.

Maseko was named one of the 23 winners of the contest worldwide in 2014 shortly after the death of South Africa's first black president Nelson Mandela.

He was an avid public speaker and community worker who inspired many African children to pursue careers in science, the family statement said.

In 2016 he was honored by the Gauteng Department of Education in South Africa and had a science building at a school named after him, according to the statement.

Details of his memorial service and funeral will be announced later this week, family spokeswoman Sthembile Shabangu said.

White South African entrepreneur Mark Shuttleworth, who bought a seat on a Russian Soyuz capsule for £12m was the first African in space.

He spent eight days aboard the international space station in 2002.