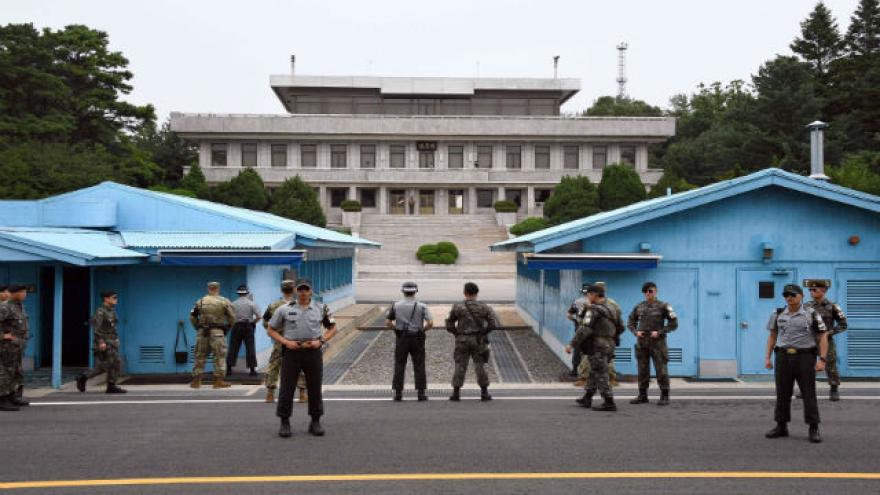 North and South Korean negotiators will sit down together Tuesday for the first time since December 2015, after North Korea picked up a hotline between the two technically-still-at-war nations last week. Photo courtesy Jung Jeon-Je/AFP/Getty Images

(CNN) -- Negotiators from South and North Korea arrived at the Demilitarized Zone (DMZ) early Tuesday to sit down for the first time since December 2015, after a hotline between the two technically-still-at-war nations reconnected last week.

The meeting is taking place at Peace House in the Joint Security Area, also known as Panmunjom or "truce village," the only part of the 250 kilometer (160 mile), heavily fortified demilitarized zone where North and South Korean soldiers stand face-to-face.

South Korean President Moon Jae-in and North Korean leader Kim Jong Un will be able to monitor the talks in real time, and intervene if necessary. Both leaders will have a hotline at their disposal, direct to the Peace House.

However, the South Korea's Unification Ministry says only Moon will be able to watch as events unfold.

The talks began in good spirits, with representatives laughing while entering the conference room where the day's talks were to be held. The principal players, South Korean Unification Minister Cho Myoung-gyon, and his North Korean counterpart, Ri Son Gwon, entered side by side.

Discussing the cold weather, Ri said that "it wouldn't be an exaggeration to say that the inter Korean relationship is frozen more than the nature's weather," according to pool notes translated by CNN.

He said it has been 18 years since a 2000 declaration of detente, adding that "we officials from both nations should approach these talks with sincerity and diligence, so we can give a valuable result, the first gift of this new year, to the entire Korean people who are watching us with a great anticipation."

Cho said the talks represented a good start for the re-engagement of inter-Korean relations, referencing a Korean expression, "A start is already half."

"I think it would be great if we can lead this talk with such mindset of 'start is already half', along with patience and strong will," he said.

He added that he hoped the talks would proceed "without haste, with patience," and that the talks would be held "undisclosed" with a briefing for the media during a mid-talk break.

What's on the table?

Negotiators will be discussing North Korean participation in the upcoming Winter Olympics, to begin in Pyeongchang, South Korea early next month, as well as "inter-Korean relationships," according to Seoul.

North and South Korean negotiators have met multiple times in the past, without any permanent decrease in tensions or hostilities, and analysts advised caution on Tuesday's talks.

"I think prudence dictates that we be very cautious about these talks," said Evans Revere, a former US diplomat in South Korea. "We've been down this road before ... in almost every instance, ultimately we've been disappointed."

Last year was dominated by growing concern over North Korean missile and nuclear testing, and the angry, saber-rattling rhetoric both were inspiring in Washington.

However, 2018 started off with a rare glimmer of optimism on the Korean Peninsula.

Two employees of South Korea's Unification Ministry -- the sprawling government office which oversees all things North Korea -- had been calling an inter-governmental hotline at 9 a.m. and 4 p.m. every day since February 2016, when the North Koreans cut off communications.

After almost two years, someone finally picked up, and within days, the two sides had agreed to meet in person.

US President Donald Trump has attempted to claim credit for the breakthrough, saying it would not have happened "if I wasn't firm, strong and willing to commit out total 'might' against the North."

As a gesture of goodwill, South Korea and the US have agreed not to hold joint military drills during the Olympics, which are scheduled for February 9 to 25. The drills have long infuriated North Korea and been a sticking point with Pyongyang.

"It is very much in the US interest that the talks be expanded to include tensions reductions mechanisms and nuclear and missile test freezes, but the Trump team seems hesitant to seize the opportunity," said Adam Mount, senior fellow at the Federation of American Scientists for nuclear and defense policy, adding that "these talks have begun more despite Trump than because of him."

Evans Revere, a former US diplomat in South Korea, predicted Pyongyang may try to extract concessions from Seoul in exchange for North Korea's participation in -- and non-disruption of -- the Winter Olympics.

"Some sort of assistance package, some sort of sanctions relief," he said.

"Another thing that the North Koreans may be looking at is something more permanent in the area of a reduction of military exercises that South Korea engages in with the US."

Revere said from experience the first round of negotiations "is very tough."

"They lay out a position and they make it very clear they're not going to back away from it, even if perhaps later they do," he added.

Sue Terry, former CIA analyst and senior fellow for Korea at the Center for Strategic & International Studies, said President Moon "will have to give some kind of concession to North Korea, for North Korea to send a delegation to the Olympics."

This, she added, may involve the reopening of the Kaesong industrial complex, a joint economic venture between the two Koreas that was closed by Moon's conservative predecessor Park Geun-hye in 2016.

"President Moon might have to cancel, or indefinitely postpone, US-South Korean joint military exercises," she said.

Chad O'Carroll, managing director of a research and consultancy firm called the Korea Risk Group, said the talks were starting off on a positive note, with little of the usual disagreement about whether to hold them on the North or South side of the Joint Security Area.

"It definitely seems like something is in the air and we'll see what that leads to," he said. "For the North Koreans, the motivation to take part in these talks is undoubtedly due to the pressure that is building up on the country."

Sanctions on Pyongyang are at their highest level in history, with both US and United Nations restrictions taking their toll on the country's economy, raising major concerns for a population that has suffered through multiple famines in the recent past.

"Policy planners in North Korea are going to really start to struggle in the medium to long term in terms of being able to plan effectively and grow the economy with the amount of economic and diplomatic isolation there is right now," O'Carroll said. "There is one small potential relief valve for Pyongyang, which is South Korea."

Under previous South Korean President Roh Moo-hyun, Seoul advanced the "Sunshine Policy" of greater economic and diplomatic engagement with North Korea, including aid and other relief.

President Moon was a key adviser to Roh, and during the election campaign last year, consistently supported improving ties with Pyongyang, though he has taken a harder line since coming to power.

While some analysts predicted North Korea may attempt to gain tough concessions from South Korea for a peaceful Olympics, O'Carroll said it may be an ideal time for a reinvigorated Sunshine Policy to bear fruit.

"It's a gamble. It may not work. But it's better than nothing. And North Korea doesn't really have any other options right now in terms of reducing (sanctions) pressure," he said.