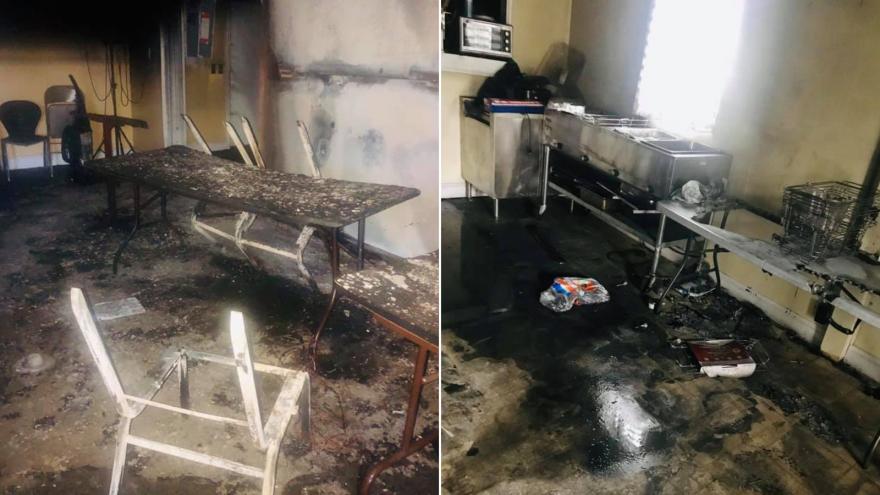 (CNN) -- A South Carolina church kicked off Christmas week by learning that a suspected arsonist set its executive building on fire, but that didn't stop churchgoers from attending their Sunday worship.

Church leaders received a call early Sunday reporting the building was ablaze, and police informed them that "someone intended it to be on fire," said Shaneka Newell, the lead administrator for Spirit Filled Ambassadors for Christ Ministry, an apostolic church in Andrews, a small town about 60 miles north of Charleston.

Everything inside the building, which plays host to Sunday school and community events, is destroyed. The walls and parts of the ceiling will have to be torn out and replaced, she said. It will be "a huge impact to rebuild," she said.

It appears the perpetrator started the blaze by setting tablecloths and various papers on fire, Newell said, and "you can tell someone walked around and set what they wanted on fire."

Though the main sanctuary across the street wasn't damaged, the executive building plays an important role for the 20-year-old church, she said.

"We have different programs in the building. We have all of our functions there. We rent the building out to the community as well for parties, banquets, conferences," she said. "We are supposed to have a law enforcement program there in two weeks where we honor law enforcement."

It's unclear whether the event will go forward as planned, she said, as "we just have to regroup and think about how to proceed. ...We don't want to stop. We are a church. We reach a lot of people."

The church may have to postpone its Sunday school services until it can find another venue, Newell said.

Police and fire officials confirmed to church leaders that this was no accident, she said.

In a Facebook post, the church said no one was injured in the fire, but "our ministry lost everything inside of the building, only leaving the building structure behind."

The fire did not dissuade the largely African American congregation from its worship, Pastor Deshawn Rouse told CNN affiliate WBMF.

"I spent the whole service trying to encourage everyone to lift spirits," he told the station. "We just spent the service praying for the person or persons who did it and asking God to fill that void that's missing in that person's life that would make them do that to a sanctuary."

Rouse received a call about 4 a.m. about the fire. By the time he arrived, firefighters had extinguished the blaze, he said. The FBI and South Carolina Law Enforcement Division arrived Tuesday morning to investigate, the pastor told WBMF.

It appears the perpetrators broke in about midnight, he said. Someone also broke a window on a church bus, Rouse told the station.

"It just makes you have a thousand questions why someone would do this to us," Rouse said.

The church is offering an unspecified reward for information that leads to an arrest.

"Although our congregation is praying for the person(s) involved, we also seek justice for the crimes committed!" its Facebook post said.

A GoFundMe account has been set up to raise $20,000 for repairs.