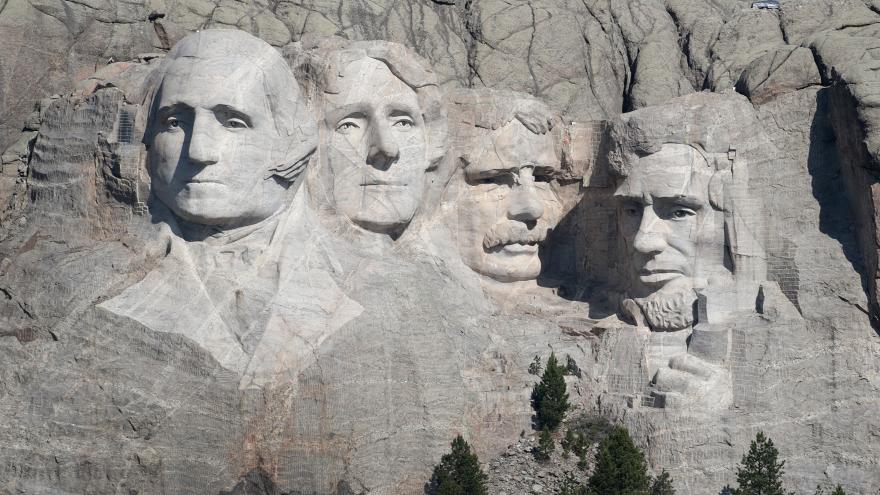 Republican South Dakota Gov. Kristi Noem is suing Interior Department officials including Secretary Deb Haaland for declining to grant a permit for a Fourth of July event including fireworks at Mount Rushmore this year, according to a news release from the governor\'s office. - Scott Olson/Getty Images

(CNN) -- Republican South Dakota Gov. Kristi Noem is suing Interior Department officials including Secretary Deb Haaland for declining to grant a permit for a Fourth of July event including fireworks at Mount Rushmore this year, according to a news release from the governor's office.

"After telling us they'd 'circle back,' the Biden administration has not responded to our request to uphold the Memorandum of Agreement between the State of South Dakota and the National Parks Service (NPS) to host a safe and responsible national celebration and fireworks show," Noem said in the release.

"Unfortunately, the new administration departed from precedent and reneged on this agreement without any meaningful explanation," she continued, adding that she was asking a federal court to block the Interior Department's "denial of the fireworks permit and order it to issue a permit for the event expeditiously."

"Last year's Mount Rushmore Fireworks Celebration was held safely and responsibly and had a huge positive impact on the South Dakota economy," the release said.

The lawsuit comes after former President Donald Trump -- of whom Noem has been a staunch ally -- spoke at the monument last year for the Fourth of July.

"We're getting them. I got fireworks," Trump said during a May 2020 appearance on the Dan Bongino podcast. "For 20 years or something it hasn't been allowed for environmental reasons. You believe that one? It's all stone. So I'm trying to say where's the environmental reason? Anyway, I got it approved, so I'm going to go there on July 3rd, and they're going to have the big fireworks."

The Interior Department declined to comment Friday when contacted by CNN, pointing to a copy of its letter to South Dakota Tourism Secretary Jim Hagen stating that the department was "unable to grant" the state's permit request.

"The 2019 Memorandum of Agreement between the State of South Dakota and the Department of the Interior commits us to work together to bring fireworks back to the Memorial in a safe and responsible manner," National Park Service Regional Director Herbert Frost, who also is named in Noem's lawsuit, wrote in the March 11 letter.

"Potential risks to the park itself and to the health and safety of employees and visitors associated with the fireworks demonstration continue to be a concern and are still being evaluated as a result of the 2020 event," he continued. "In addition, the park's many tribal partners expressly oppose fireworks at the Memorial. These factors, compiled with the COVID-19 pandemic, do not allow a safe and responsible fireworks display to be held at this site."

There was no social distancing at last year's event, despite the record-high number of new coronavirus cases in the United States at the time. The event also took place amid environmental concerns over the use of fireworks in the dry land and as the country engaged in a reckoning over its monuments and racist history. There were July Fourth fireworks at Mount Rushmore for several years, but they had been discontinued in 2009 over environmental concerns, including increased risk of fires.

The National Park Service had prepared an environmental assessment ahead of last year's event and concluded the fireworks would have "no significant impact."

Noem said last year that advancements in pyrotechnics and a strengthened forest led to the decision to have the fireworks return to the site in 2020.

According to an April 2020 news release from the National Park Service, the agency worked with the state of South Dakota, local communities, the South Dakota Highway Patrol and the fireworks contractor and staff to develop a wildland fire response plan and a Unified Command incident management team.

In the lawsuit, dated April 30, lawyers for Noem wrote that "In October 2019, DOI and the State signed a memorandum of understanding to continue the traditional fireworks show in 2020 and the years thereafter."

"On March 11, 2021, DOI sent the State an abrupt, 620-word letter stating that the Independence Day fireworks show would not be allowed at the Memorial this year," they continued. "The letter contained no specific factual findings, referenced no implementing laws or governing regulations, and included no discussion of any other objective determinations."

Asserting that such a "failure to 'articulate a satisfactory explanation for its action' " was a violation of federal statute, the lawyers urged a judge to block "DOI's denial of the permit and order it to issue a permit for the event expeditiously."