Southern California fire is 'out of control,' forcing thousands to evacuate 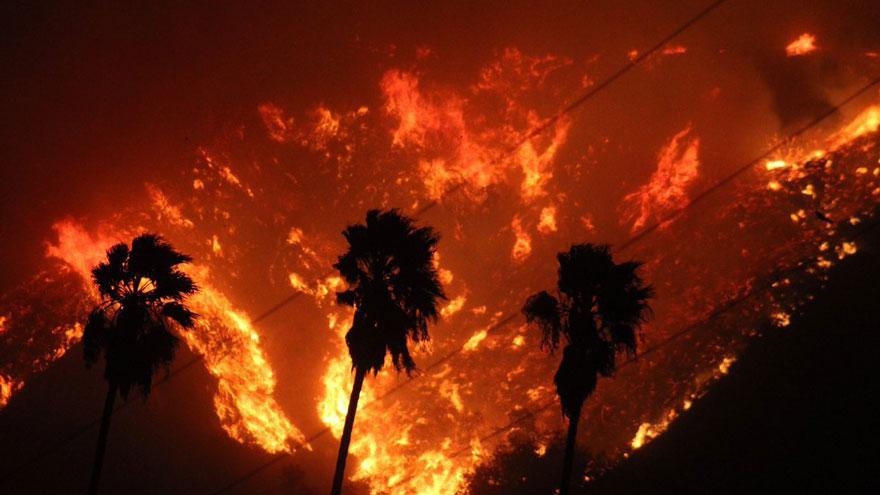 By Tuesday morning, the fire had burned about 45,000 acres in 13 hours, and some homes were ablaze in the northern part of Ventura -- a city of more than 100,000 people along the Pacific coast.

The fast-moving fire forced sheriff's deputies to knock on doors to warn residents to evacuate in the dark. About 150 buildings had been destroyed by Tuesday morning.

On Ventura's northern edge, at least 10 homes and numerous palm trees were burning in one neighborhood, sending thick smoke and dangerous embers into the gusty air.

An evacuee, Catherine Wastweet, stood on a street Tuesday morning and looked up to the foothills where her neighborhood was aflame.

"We live up there ... but we just don't know whether our house is burned down or not, because we can't even see through all of the smoke," she said.

• The brush fire, called the Thomas Fire, was first reported at Steckel Park, just north of Santa Paula, around 6:30 p.m. local time, according to the Ventura County Fire Department.

• By early Tuesday, the fire was burning at a rate of nearly an acre per second. At that speed, it would have covered Manhattan's Central Park in about 15 minutes.

• About 27,000 people were under mandatory evacuation in Ventura County as fire officials warned the powerful winds could push flames further into the city of Ventura.

• A dead animal was found at the site of a rollover car crash near the evacuation zone Monday night, Ventura fire officials said. Initially, authorities reported that a person had died there, but they later clarified that no human body had been found.

• "The fire is still out of control and structures continue to be threatened throughout the fire area," the Ventura County Sheriff's Office said on a local emergency preparedness website. "Due to the intensity of the fire, crews are having trouble making access, but there are multiple reports of structures on fire."

Within a few hours, the fire jumped to thousands of acres as Santa Ana winds, blowing as fast as 40 to 60 mph, carried its embers. The fire engulfed dry chaparral and climbed through steep terrain.

These winds make up the season's "strongest and longest" Santa Ana event.The Santa Anas are strong, dry winds that high-pressure systems push from east to west, from the mountains and desert areas down into the Los Angeles area.

They could make the situation even worse Tuesday, with gusts of 50 to 60 mph possible.

The fire also burned down power lines, at one point leaving more than 260,000 homes and businesses without power in Ventura County and neighboring Santa Barbara County, said Susan Cox, a spokeswoman for Southern California Edison.

By early Tuesday, power had been restored to all but 20,000 customers -- but more outages were possible because flames were burning along power transmission paths, Cox said.

As the fire spread, the nearby hills glowed a fiery orange as residents in Santa Paula threw a few of their belongings into cars to evacuate, according to video footage from CNN affiliates.

Because it was night and heavy winds were blowing, authorities couldn't immediately use air tankers and helicopters to help battle the wildfire.

"We'll have them as soon as light is out, and they can safely fly," Ventura County Fire chief Mark Lorenzen said.

About 1,000 firefighters are battling the blaze or heading to the area to help Tuesday morning.

Ventura County fire engineer Richard Macklin estimated that one stretch of flames extended 5 to 6 miles Tuesday morning. He said he'd never seen a fire spread as fast at such a distance in his 30-year career.

Officials shut State Route 150, between Ojai and Santa Paula, due to the fires. All students at the Thomas Aquinas College, a private Catholic college in Santa Paula, were evacuated Monday night, the school said on Twitter. The college and the Santa Paula and Ventura school districts announced their closures Tuesday.

Two evacuation centers were opened for residents who had to leave their homes.

Hours into the disaster early Tuesday, California's Office of Emergency Services secured a grant from the Federal Emergency Management Agency to fight the fire.