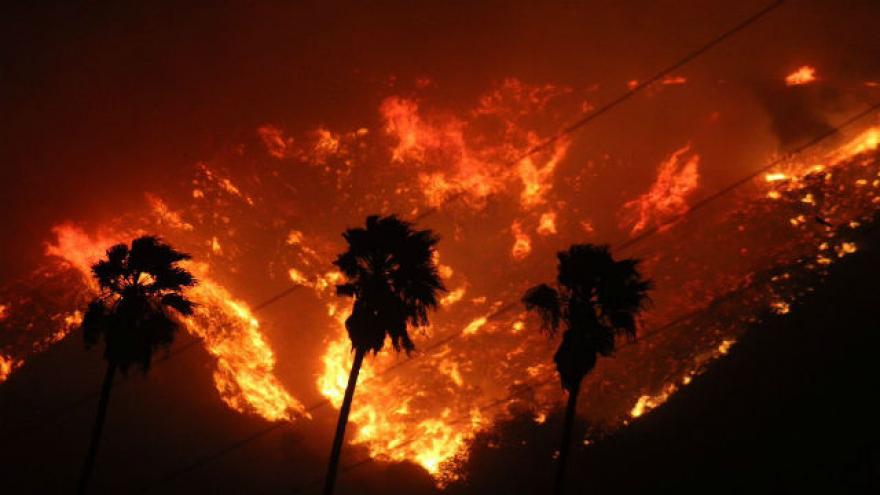 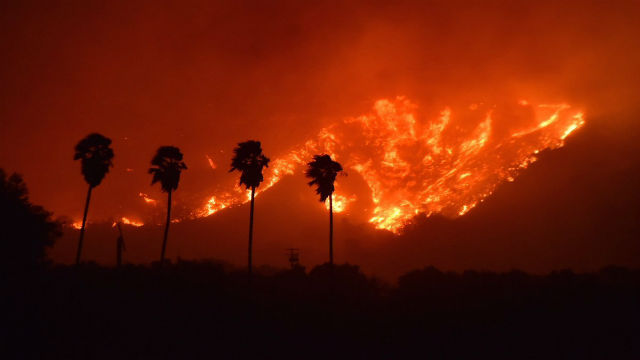 (CNN) -- Every day firefighters in Los Angeles receive a brush burning index report that indicates the fire danger. If it's 165 or higher, that's extreme.

The number for Thursday is 296, the highest it has ever been, according to Los Angeles Fire Chief Ralph Terrazas.

Terrazas and other officials in Southern California warned residents Wednesday evening that a series of wildfires fueled by wicked Santa Ana winds and dangerously dry vegetation likely was going to get even worse in the next 24 hours.

"We stand a fairly good chance of a very challenging night and day (Thursday)," said Tim Chavez, a fire behavior analyst for CalFire, at a news conference on the 90,000-acre Thomas Fire in Ventura County. "There's a lot of potential for some large fire growth (for this fire)."

More than 100,000 acres in Southern California have burned with little containment. Overworked firefighters caught a little bit of a break Wednesday when the winds eased somewhat, but the forecast for the next three days was bad news on top of bad news.

The winds will pick up, with gusts up to 64 mph, before they taper down again. Humidity will be super dry -- less than 10%. Red flag warnings will be in effect through Saturday night, 24 hours later than originally predicted.

• Told to leave: Evacuations in some of the area's most affluent neighborhoods near the Skirball Fire affected 46,000 people, officials said. The fire was on the other side of the highway from both the Skirball museum and the Getty museum, where the art was staying put.

• Freeway shutdown: The 475-acre Skirball Fire near the tony Bel-Air area of Los Angeles startled morning commuters on Interstate 405. The busy freeway was shut down over a 9-mile stretch for hours as the fire got close. "It was dark until I saw a gigantic ball of orange," I-405 motorist Tiffany Lynette Anderson wrote on Instagram, where she posted a picture of fire raging beside the highway before it was closed. "I could feel the heat on my windows," said Los Angeleno Joy Newcomb, who also drove by the fire. The freeway has since reopened, but some ramps remain closed.

• Curfew enacted: On Tuesday, the city of Ventura declared a daily curfew, from 10 p.m. to 5 a.m., to protect residents and prevent crime such as looting in evacuation areas.

• Creek Fire in northern Los Angeles: The second-largest blaze is the Creek Fire, having burned more than 12,000 acres in and near northern Los Angeles' Sylmar and Tujunga neighborhoods since it began Tuesday morning. Seven firefighters suffered injuries that aren't considered life-threatening.

• Masks suggested: The smoke resulting from the Thomas fire is creating a "severe impact on air quality and visibility," the Ventura County Fire Department said on Twitter.

• School closures: More than 260 Los Angeles public and charter schools will be closed Thursday and Friday.

• Other fires: The Rye Fire near Santa Clarita in Los Angeles County grew to about 7,000 acres.

Los Angeles authorities ordered parts of the Bel-Air district near the fire to leave, but those are just a fraction of the evacuations that have been ordered in Southern California since Monday night.

Smoke collected even in areas that weren't burning. Health officials warned people in the heavily populated San Fernando Valley and other parts of the northern Los Angeles area to limit their time outdoors.

A video posted to Instagram shows a Los Angeles County Fire helicopter maneuvering around heavy smoke to make a water drop on the Skirball Fire.

The smoke from the fires could be seen from the International Space Station. Astronaut Randy Bresnik wrote in one tweet: "I was asked this evening if we can see the SoCal fires from space. Yes Faith, unfortunately we can. May the Santa Ana's die down soon. #Californiawildfire." In another post he thanked the thousands of people fighting the fires.

The Thomas Fire spanned about 101 square miles in Ventura County, which sits just north and west of Los Angeles.

Officials there said they couldn't give a precise number of homes destroyed, because flames in burned neighborhoods still were too intense for examination. But they had estimated about 150 buildings early Tuesday. The number will increase once the focus shifts from firefighting and rescue to more damage assessment, fire officials said.

On Wednesday, the fire grew significantly on the northern side of the blaze.

Flaming tumbleweeds shoot into the air

At his home on Solimar Beach in Ventura, Phil Lee was tired and nervous.

He had a restless night Tuesday into Wednesday after fire put on a startling show near his waterfront home.

There was a deep thicket of brush nearby that had survived a 2015 wildfire.

But when the flames crashed into it Tuesday night it was like a "gas bomb" going off, he said.

Tumbleweeds 5- or 6-feet in diameter shot hundreds of feet in the air, he said, spreading the fire to new spots, including across the nearby 101 highway.

"It's humbling when you see Mother Nature be so aggressive," Lee said.

Lee said he had a kayak on his deck, just in case they need to escape by water.

I won't be a victim, man standing in rubble says

Sergio Barbosa has gone through waves of emotions. On Tuesday he tried to go back to the house he had lived in almost all his life, but police wouldn't let him into the neighborhood.

So he and a friend walked around and found a neighbor with a golf cart that got Barbosa in.

He had woken up that morning, a day after evacuating, with a bad feeling. As they approached his address, he worried, "Please don't let that be my house."

It was, and it was gone.

The home his mother had helped build, where years of memories were made and stored, was white rubble and melted shells in what used to be a kitchen.

He was angry and sad. He was also relieved. He had his answer.

He says he will not let the fire make him a victim, even if all he has left are a few clothes and some personal effects. And he will rebuild -- "twice as nice" -- in the neighborhood he loves.

"I'm not going to let one incident scare me off," he said.

The winds that cause the fire were part of the season's "strongest and longest" Santa Ana event. The Santa Anas are strong, dry winds that high-pressure systems push from east to west, from the mountains and desert areas down into the Los Angeles area.